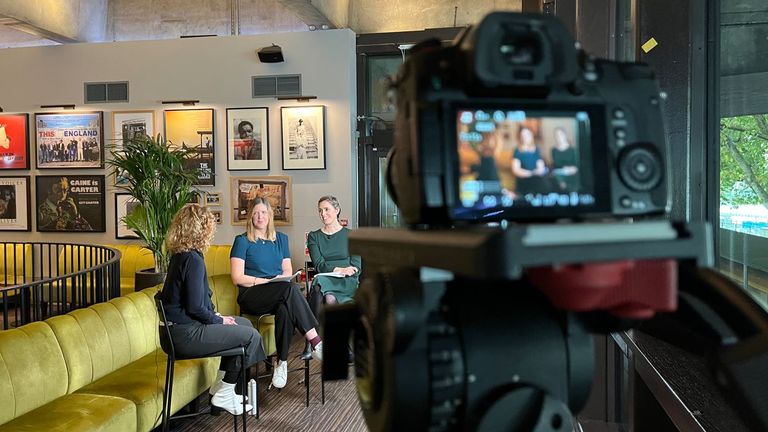 Gangs Of London has found an unlikely fan in the Albanian prime minister, as it returns to screens later this week.

The Sky thriller, which has a body count that rivals that of Game Of Thrones, is back for a second season on 20 October, treating fans to more political intrigue, more bloody gun fights, and more familial infighting.

For the uninitiated, the show sees a number of domestic and international gangs attempting to seize control of the capital, following a power vacuum left by the assassination of the leader of a notorious crime family, the Wallaces.

In and among the chaos, undercover police officer Elliot, played by BAFTA-nominated actor Sope Dirisu, has infiltrated the Wallace family in an attempt to unearth their criminality – but with brutal consequences.

The show has won international acclaim – not only winning awards, but even praise from the unlikeliest of places.

“Orli, who plays Luann (an Albanian Mafia boss) was actually contacted by the president of Albania who called him to say what a fan of the show he was and how proud he was of representing Albania,” showrunner Corin Hardy told Sky News’s Backstage podcast.

And that’s not the only feedback the show has had from insiders. Sope Dirisu added simply that “yes”, he had heard from people in gang land – but that’s all he could say.

Gangs Of London is also famed for its merciless bloodlust, linked to the idea that no single character is safe – an idea held onto by the show’s production team.

Hardy told Backstage: “The audience should always be, to some extent, uncomfortable, because they are watching these characters that they want to follow, that they love.

“But I never wanted the TV show to feel like a TV show where you sort of settle in, and each episode is going to have a certain amount of this or that, and the actors are going to be sort of happily protected throughout the show for the sake of television.

“It should be more like you would get in a single story or movie where you just don’t know where it’s going, what’s going to happen, who’s safe… we wanted to continue that and keep you on the edge.”

But what’s it like having to be tortured and mercilessly shot at during the show?

“Being tortured was not fun,” Dirisu explained to Backstage,

“That was cold. There was no act required in that sequence at all.

“It feels strange to say that while you’re seeing all this gore and blood and violence, we’re having a great time, where we’re living out childhood dreams, and we get to make believe every day – what could be more fun?”

Hardy added: “It just takes a lot from having some kind of hare-brained idea like ‘wouldn’t it be cool to stage a shoot out in a fish market’, at five in the morning and then, you go through the sort of the design, the storyboarding, the rehearsals, the action design, pre-visualisation rehearsals with the actors, everything… and then you finally get there, and you’ve got two to three to four days maybe to pull it off.

“So it is a lot of fun, but it’s just a lot of meticulous planning and effort on everyone’s part.”

Gangs Of London season two begins on 20 October on Sky and NOW – you can hear our review of the show on this week’s Backstage podcast.