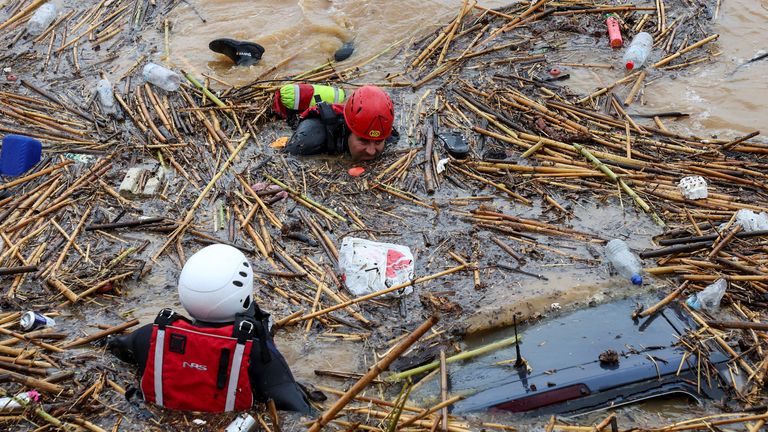 A man has drowned and a woman is missing after their car was washed away by flash floods on Crete.

The 50-year-old man was found in the seaside village of Agia Pelagia, which is feared to have been worst hit as powerful storms unleashed devastating damage on Saturday.

Divers from the coastguard and fire department’s special disaster unit have been deployed to search for the missing woman, who is believed to have been trapped inside the car.

A number of cars were pictured floating in the sea off Agia Pelagia – located around 16 miles (25km) northwest of Crete’s capital, Heraklion (Iraklio) – after rivers overflowed on Greece’s largest island.

Several roads in the city are flooded and Heraklion international airport has been closed due to its runways being underwater.

“No one can tell when flights will resume,” airport manager Giorgos Pliakas told a local news site.

Footage on social media shows huge crowds of people waiting for updates on delayed and cancelled journeys, as passengers described the situation as “chaos” and an “absolute shambles”.

Meanwhile fire crews have been inundated with calls for to bring people to safety or pump water out of flood-hit properties.

Four people were found trapped in two vehicles in the eastern city of Sithia.

Eight tourists and a guard were unable to leave an archaeological museum, according to local police.

Another woman trapped in her car was also rescued, as fears mount for the safety of those whose whereabouts are unknown.

Around 165 miles (265km) away from Sithia, flood waters invaded homes in the western city of Chania.

People in Lasithi, on the eastern side of the island, were sent a text message warned to stay at home.

Fire crews were seen almost up to their neck in water during the search operation, with submerged vehicles seen alongside floating debris including a refrigerator.

Police in Crete warned motorists about widespread problems on the roads due to the severe weather.

Vladimir Putin trying to starve Ukrainians into giving up in the war but he will fail, says UK’s foreign secretary

A lost royal city where worshippers prayed to a water goddess has been found, researchers believe