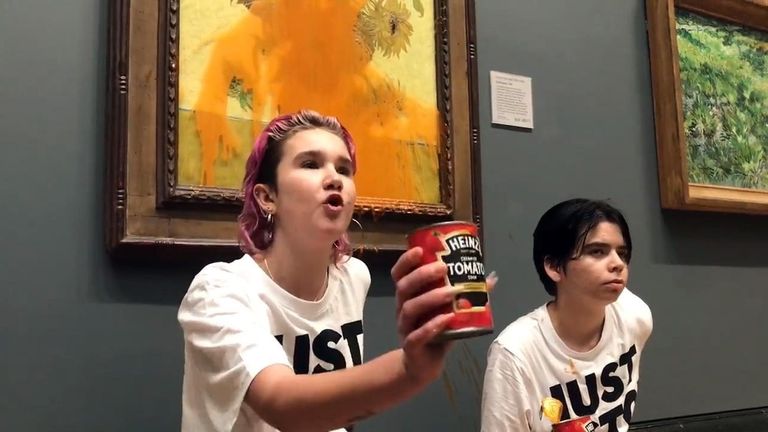 Two women walked into a room at the gallery in London’s Trafalgar Square at about 11am, the campaign group said.

They threw the contents of two tins of Heinz tomato soup over the famous 1888 painting, which has an estimated value of £72.5m.

A video shows the two women wearing Just Stop Oil T-shirts gluing one hand each to the wall below the painting, which is protected by a pane of glass.

One of the climate change activists, 21 year-old Phoebe Plummer, then shouted: “What is worth more? Art or life?

It’s the 14th day of demonstrations linked to the group – which wants the government to stop all new oil and gas licences.

The group’s activists have been blocking roads around parliament and elsewhere in London in the last few days.

Last Sunday, police said that more than 100 people had been arrested after a weekend of protest-related activity by
environmental groups.

COP27: Everything you need to know about the United Nations climate talks in Egypt

“The cost of living crisis is part of the cost of oil crisis.

“Fuel is unaffordable to millions of cold hungry families. They can’t even afford to heat a tin of soup,” she added, brandishing a tin.

Gasps and exclamations of “oh my gosh!” and “security” ran out from onlookers as the soup hit the painting. Visitors were quickly escorted out by security, who then shut the doors to room 43 of the gallery where the painting hangs.

Police have arrested two people for criminal damage. In a tweet from the Metropolitan Police Events account, the force said: “Officers were rapidly on scene at the National Gallery this morning after two Just Stop Oil protesters threw a substance over a painting and then glued themselves to a wall.

“Both have been arrested for criminal damage & aggravated trespass. Officers are now de-bonding them.”

Škoda unveils new Enyaq Coupé iV reminiscent of Volkswagen’s ID.5 GTX plus a sportier RS version with up to 545 km of range

Not ‘fit and proper’: Russia Today has its licence to broadcast in UK revoked with immediate effect

‘We will go get him’: Police were ready to arrest Will Smith after he slapped Chris Rock at Oscars, says ceremony producer