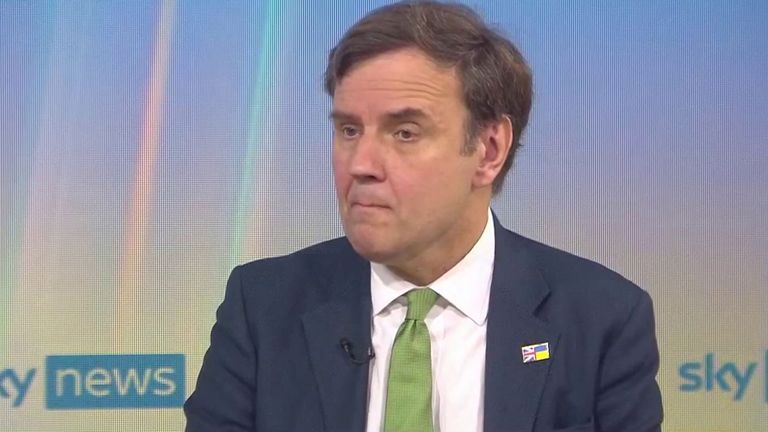 Kwasi Kwarteng has landed back in the UK after leaving the US early as his future lies in the balance ahead of another potential mini-budget U-turn.

The chancellor arrived at Heathrow just before 11am on Friday after leaving International Monetary Fund (IMF) meetings in Washington DC a day early.

He was then rushed to Downing Street where Liz Truss will give a press conference this afternoon. She is expected to announce a U-turn on corporation tax announced in the mini-budget three weeks.

Sky News believes the freeze in corporation tax will not happen and will instead be increased to 25%.

Mr Kwarteng will not be accompanying her at the press conference which is being seen as placing the chancellor’s position at risk.

Just hours earlier a minister told Sky News the prime minister has complete confidence in Mr Kwarteng and will stick to his growth plan.

“And I have absolute confidence in Kwasi Kwarteng as chancellor of the exchequer.”

Asked if Mr Kwarteng and Liz Truss will still be chancellor and prime minister in a month’s time, he said: “Yes, absolutely.”

Mr Hands refused to be drawn on reports they are set to reverse key parts of the tax-cutting mini-budget, which unleashed market turmoil when it was announced last month.

He repeatedly insisted the public will have to wait until Mr Kwarteng sets out details of how the billions in cuts will be paid for on 31 October, when he sets out his medium-term fiscal plan and the Office for Budget Responsibility publishes its forecast.

The chancellor was at IMF meetings in Washington DC this week but left a day early to arrive back in the UK today.

Mr Hands insisted it is “not unusual” for ministers to return from international visits a day early and said he is returning to have discussions with colleagues and to prepare for 31 October.

He reiterated Ms Truss and Mr Kwarteng’s insistence that the UK’s market turmoil is part of a global problem exacerbated by the war in Ukraine and post-pandemic recovery.

‘Whole country should get behind PM’

Mr Hands was asked about a report in The Times suggesting some Tory MPs are ready to replace Ms Truss with Rishi Sunak and Mr Kwarteng with Penny Mordaunt.

He rubbished that notion, saying he “does not recognise that story at all”.

Mr Hands, who supported Mr Sunak in the Tory leadership campaign, said he had spoken to Ms Mordaunt yesterday and would be “very surprised” if that was true.

“What we do need to do is the Conservative Party does need to unite behind our prime minister,” he said.

“She was our choice for the Conservative Party just a few weeks ago. We need to remain united, get together behind Liz Truss. Kwasi Kwarteng is our team.”

Labour’s Ed Miliband, the shadow climate change secretary, accused the government of “taking people for fools” by claiming the economic turmoil is a global phenomenon.

“There is no other finance minister who’s rushing back on an airplane early from the IMF meetings,” he told Sky News.

“You know, this is a collective meltdown on the part of the government. And, you know, the British people deserve so much better than what this government is putting the country through.”

Quizzed on why Labour MPs had supported the Conservative’s reversing the National Insurance rise earlier this week, Mr Miliband said that is because “we’re not in favour of raising taxes on ordinary people”.

“More than half of the measures in the mini-budget were measures we oppose,” he added.

After only 28 days, Liz Truss has had the worst possible start – can she win back control?

Who could replace Liz Truss as prime minister if she is ousted as Tory leader?