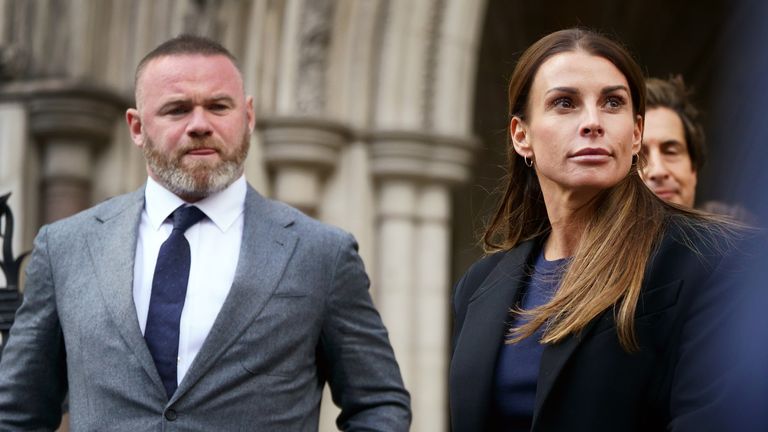 Following the headline-grabbing Wagatha Christie trial, it wasn’t long before a TV drama based on the story was announced.

Now, the stars who will play Coleen Rooney, Rebekah Vardy and their lawyers in a two-part film Vardy v Rooney: A Courtroom Drama, which is based on transcripts from the infamous libel hearing, have been revealed.

The Channel 4 drama promises to show “all of the incredible and unbelievable moments from a case that kept the public and media gripped”.

BAFTA-winning actress Chanel Cresswell, best known for her role in the This Is England series, will play Rooney, while Harry Potter and Game Of Thrones star Natalia Tena is set to portray Vardy.

There will also be a star turn from Michael Sheen – known for his portrayals of real-life figures such as Sir Tony Blair and broadcaster David Frost – who will appear as Rooney’s charismatic barrister David Sherborne.

Vardy’s barrister Hugh Tomlinson – whose previous clients include the King, easyJet founder Sir Stelios Haji-Ioannou and oligarch Roman Abramovich – will be portrayed by Simon Coury, best known for appearing in The Professor And The Madman.

Husbands Wayne Rooney and Jamie Vardy will be played by Dion Lloyd and Marci Nagyszokolyai respectively.

Dubbed the Wagatha Christie case when it first came to public attention in 2019, the drama unfolded when Rooney said in a social media post that she had carried out a months-long “sting operation” – and accused Vardy of leaking “false stories” about her private life to the tabloids.

‘Their every move in the courtroom was dissected’

Vardy sued Rooney for libel, and the case came to a head earlier in 2022 as the claim was heard at the High Court.

Read more:
Rebekah Vardy’s first interview after losing case
What the Wagatha Christie ruling means for you on social media

Channel 4’s two-parter will recreate the “high drama, high stakes High Court defamation case… a case that had a huge impact on the lives of the two women at its heart and catapulted the two sparring legal teams into the spotlight, where much like Rooney and Vardy, their every move in the courtroom was dissected and scrutinised in the press”.

The show will air later this year.

In August, Disney+ also confirmed it was creating a three-part documentary series about the court battle, with “exclusive access” to Rooney.

Coldplay’s new single is out of this world (quite literally)

Guy Pearce on searching for humanity with new film: ‘The evolution of technology is both fascinating and disturbing’