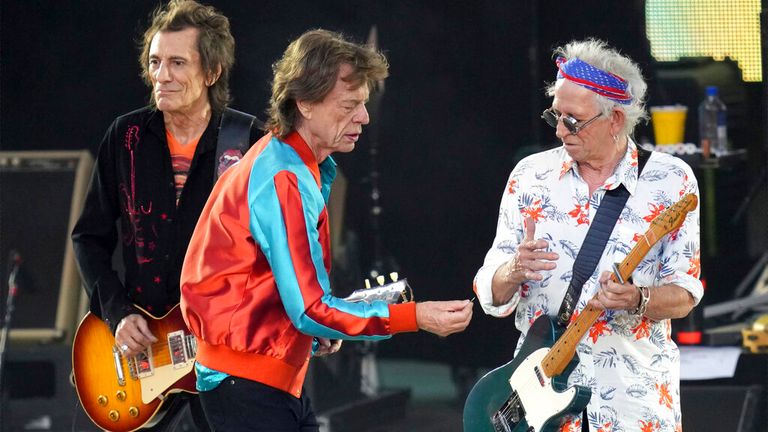 From source of moral panic, to source material for a multi-million pound drama – while drill music has moved more into mainstream culture, rapper Big Narstie has hit out at how it has been demonised in the press.

The musician and presenter is the star of new series Jungle, which he says presents the controversial genre as art for the first time on the small screen.

In an interview with Sky News, he questioned why some sectors of the music industry seem to generate more negative headlines than others.

“If we was to say that rock and roll music is the cause of all the alcohol and cocaine abuse in the country, I doubt Mick Jagger would be very happy about that,” he said.

Jungle’s arrival on the Prime Video streaming platform is seeing drill reach a brand new audience, many of whom will have only heard of the music genre in headline-grabbing newspaper pieces critical of how it can glamorise gang violence.

But there is no getting away from how firmly embedded it is now in modern music culture – a form of rap which clearly resonates globally with millions of young listeners around the world; Drill’s first UK number one last year – Body by Russ Millions x Tion Wayne – was a landmark moment.

So is Big Narstie right? Have darker forces been at play?

“The factors surrounding drill – inner city, deprived estates – those factors are there regardless of the genre,” he told Sky News.

“So I do feel that sometimes this genre cops all the blame for serious issues, you know, that it shouldn’t be blamed for really when there are other things going on.”

The charity operates from a converted bus turned into a recording studio, designed to drive creative talent in a positive direction.

“Drill is a genre that has some elements of negativity attached to it. However, for us, it’s a great meeting point with young people. That’s where they’re most passionate, that’s how they express themselves, so we can actually know a lot more about the individual based on the art they pursue.”

But that doesn’t mean the genre isn’t problematic.

“You’ve got good and bad, but drill has had a bad reputation because they’ve allowed it to have a bad reputation with tracks that go online specifically targeting people, incidents happen and then they’re doing glory videos afterwards.

“So for people to say, ‘oh we’re so hard done by’ – you’re not hard done by, you have to take accountability for what it is you’re putting out there.

“If you are creating content that is targeting people to either have violence committed against them or glorifying violence or murders… I can’t like the track regardless of how well you execute it. I can’t like it for the lyrical content.”

While it remains lyrically controversial, the success of young British drill artists proves that theirs is a voice that clearly resonates on a global stage.