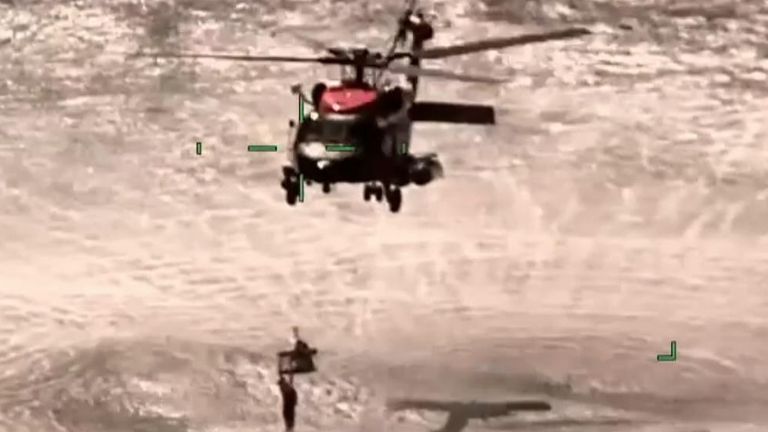 Two fishermen fought off sharks after their boat sank off the Louisiana coast while a third swam to search for help.

The swimmer, Phong Le, managed to find a phone signal and sent a Google map of his location just before his battery died, he told ABC News.

The trio were stranded at sea for 28 hours in shark-infected waters before being rescued.

Luan Nguyen said he and his friends had been in the water since around 10am on Saturday and the predators showed up on Sunday morning. He said one bit the front of his life jacket.

“I punched him in the face. And I think that’s where I caught… these injuries on my hand. I took my two thumbs and jabbed him in the eyes, and he took off,” he said.

The third man was identified as Son Nguyen.

When the group’s 24ft-long (7.3-metre) boat sunk, they were left with no radio in an area without phone service.

“We made a distress call on the VHF radio to the Coast Guard and let them know that we’d taken on water,” Mr Le told ABC. “And not even seconds after that, the boat was nearly halfway in the water.”

They tied two cool boxes together as a makeshift float and one held water and fruit, Mr Nguyen said.

Mr Le said he swam off for help on Sunday and after swimming for what felt like miles, he found a signal on his phone and texted his Google map location to a friend.

“I see him trying to reply to me. And the phone cut off – I ran out of battery,” Mr Le said.

The woman did not know the launch point and he said it took around 3.5 hours to find their vehicle in Venice, near Louisiana’s southeastern tip, so crews would know the best areas to search when dawn broke.

Using coastal contours, the command centre was able to figure out where it was, said Mr Keefe.

The Coast Guard said the two men were found around 25 miles off Empire, a small community located along the last narrow strip of the Mississippi Delta, southeast of New Orleans.

Even as the two other men were pulled from the water and lifted into a helicopter they were being circled and harassed by four blacktip sharks measuring around 4-6ft (1.2-1.8m) long, said Andrew Stone, who was in the Coast Guard boat crew that rescued the exhausted pair.

“They were too tired to even be panicking,” he said.