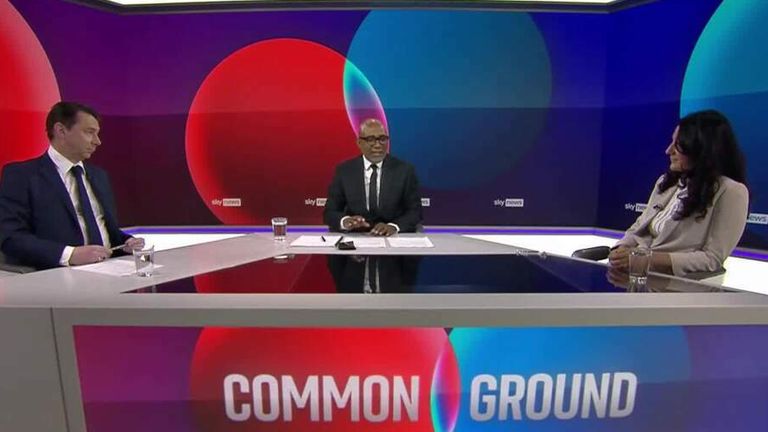 A Conservative minister has said “in the short run” the UK cannot afford net zero.

Speaking at an event run by the Institute of Economic Affairs at the Conservative Party conference in Birmingham, Northern Ireland minister Steve Baker told a packed room of party members that cutting net zero commitments this year would save households more than £1,500 amid the ongoing energy crisis.

“It’s time to have a sensible conversation about net zero,” Mr Baker urged.

He said that the government remains committed to net zero in the long term, but “the big problem that we’ve got is that renewables are intermittent”.

“The reality is that renewables are great when they are available, but they still require a lot of subsidies going in.

“So what we need is a gas to nuclear strategy. We are going to need gas as a transition fuel.”

But fellow Tory MP and panellist Bim Afolami disagreed with Mr Baker’s remarks, saying “we can afford net zero and we need to”.

He told the audience that “we need more nuclear” and “yes, we need gas as a transitional fuel as well”, adding: “But crucially, we need wind and solar.”

Mr Afolami continued: “We have some of the windiest coastlines in the world. Let’s use it. And most importantly, when there’s a war in Ukraine or anywhere else, we are not dependent on anyone else.”

The target of reaching net zero by 2050 was enshrined in law in 2019 by then prime minister Theresa May, and was included in that year’s Conservative Party manifesto under her successor, Boris Johnson.

Prime Minister Liz Truss pledged to “double down” on the commitment during the Tory leadership campaign, and has appointed Tory MP Chris Skidmore to launch a review to find the most efficient and fastest ways of reaching the target.

Trevor Phillips on whether we can afford net zero


The Office for Budget Responsibility has estimated that the total investment of public and private money needed to make net zero happen will be £1.4trn up to 2050, but this sum will be offset by more than £1trn in savings as a result.

What is net zero?

There is a consensus among scientists that achieving net zero – meaning not adding greenhouse gases into the atmosphere – is crucial to stop global temperatures from rising.

At the COP26 climate talks hosted by the UK last year, countries across the world agreed to strengthen their emissions cutting targets for 2030 by the end of the next year in a bid to limit dangerous warming.

However, some Conservatives argue that the current spike in the cost of energy is proof that the UK needs to concentrate more on extracting fossil fuels than pursuing its goal of eliminating greenhouse gas emissions by 2050.

Mr Baker helped establish the Net Zero Scrutiny Group – a group of around 20 MPs who are concerned about the costs of reaching the climate target.

He has previously warned that carbon emissions targets could be “bigger than Brexit” for the potential of causing unrest and division in the country.

However, his claims were dismissed at the time as “populist and irresponsible”.

Mr Baker also made headlines at the Tory party conference on Sunday when he apologised for “not always behaving” during the Brexit negotiations.

Speaking at a fringe event, the staunch Leave supporter said that relations with Ireland were not “where they should be” and that ministers needed to act with “humility” to restore relationships with the Republic and the EU.

“I am sorry about that because relations with Ireland are not where they should be and we all need to work extremely hard to improve them.”

20,000 Afghans to resettle in the UK as more evacuees from Kabul arrive at RAF Brize Norton

Putin in a ‘panic’ over revolution in Moscow as he seeks to ‘snuff out’ freedom in Ukraine, says PM