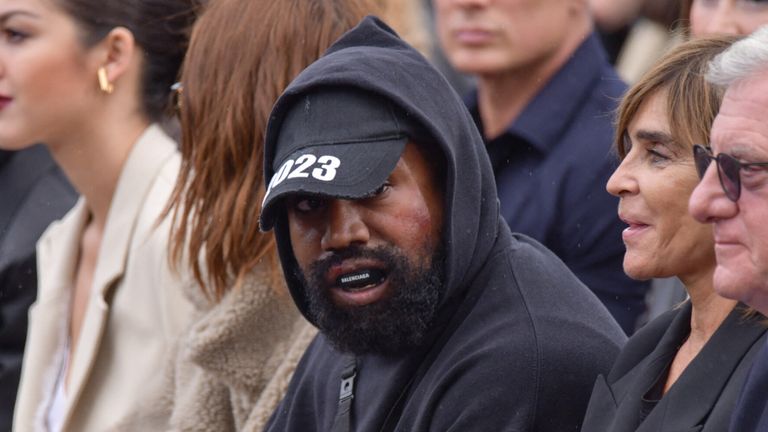 Kanye West has made his debut as a catwalk model, walking in a show at Paris Fashion Week.

The Grammy-winning star made the surprise appearance modelling for the luxury brand Balenciaga, opening its show for the spring/summer 2023 collection.

West – now known as simply Ye – walked a runway designed to resemble a bleak dystopian future with a muddy track with pools of water and the soundtrack of gunfire and techno.

Wearing all black – from his Balenciaga baseball cap and flak jacket to leather jeans – he also sported a thick beard for his first catwalk appearance, along with apparent cuts and bruises to his face.

With his bloodied lip and bruises to his cheek particularly visible once he came out into the daylight after the show, some fans expressed concern for his health, but they appeared to have been part of his make-up.

Wearing a black Balenciaga mouthguard, he was mobbed by fans as he headed to watch the Givenchy show.

After the show, West, 45, posted a shot of him on the catwalk, with just the word “war”.

Explaining his use of mud on the stage, Balenciaga creative director Demna shared his message for the show on Instagram, writing: “The set of this show is a metaphor for digging for the truth and being down to earth. Let us let everyone be anyone and make love not war.”

West’s four children North, nine, Saint, six, Chicago, four, and Psalm, three, were all there to support him.

Kim Kardashian – who filed for divorce from West in February 2021- wasn’t in attendance, but her sisters Khloe Kardashian and Kylie Jenner watched the show.

No stranger to fashion, West has his own fashion label called Yeezy, and has previously collaborated with big brands including Louis Vuitton, Nike and Gap.

Following rumours, West seemed to confirm that he will be showcasing Yeezy season nine at Paris fashion week too, with a cryptic post on Instagram that read “SZN9”.

Earlier mood boards for his collection shared on his Instagram account featured stars including Rihanna, Beyonce, Angelina Jolie, Naomi Campbell and Kim Kardashian, leaving some fans hoping they could be walking the show.

Sadly, it’s more likely they were just inspirations for some of Yeezy’s latest designs.