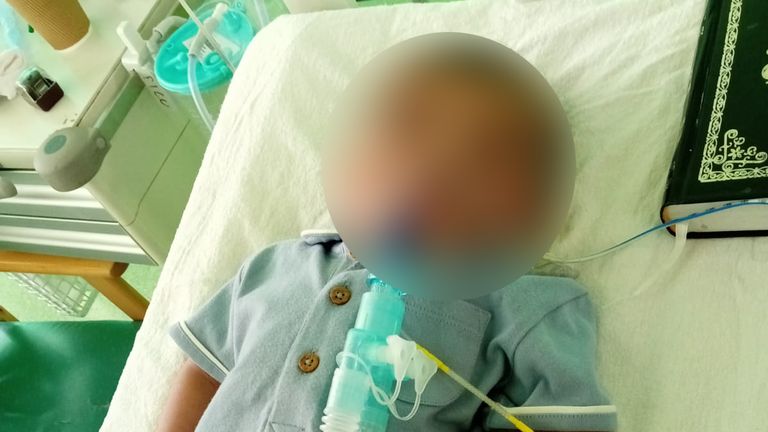 NHS staff have been told to take “extra caution” when extracting organs after a baby who was declared brain-dead began breathing again.

The safety alert sent to staff at NHS Blood and Transport, seen by Sky News, advised them to pay “particular attention to pre-conditions and red flags” in children after the boy began breathing independently.

The child’s father has told Sky News that “extra caution” is not good enough.

“They did four brain stem tests on him and certified his death. When I asked whether there was an alternative test they said no. If there’s just one test to prove someone is alive or dead it should be 100 per cent accurate.

“They said it’s a miracle. It’s not a miracle, this is faulty medical science.”

Doctors treating the child at a London hospital conducted two sets of brain stem tests before seeking a second opinion to confirm their diagnosis.

Two weeks later, a nurse at the hospital noticed the boy, then four months, was breathing.

The Academy of Royal Medical Colleges (ARMC), which sets the test, said in August it would rewrite the code of practice on brain stem testing after the child’s case came to light.

This week it told Sky News it has sped up the process with a report due to be ready in months.

It has not offered parents or hospitals advice on what to do in the meantime.

David Jones, a professor of bioethics at St Mary’s University, warned there was a risk of organs being extracted from living children if clinicians got diagnoses wrong.

“The doctors could’ve said ‘This child is dead’ and they could’ve taken his organs,” Professor Jones said.

“But they didn’t because of an ongoing legal issue, and because they didn’t, they later found out that he wasn’t dead.”

More and more clinicians are now expressing concern about brain stem testing, according to Professor Jones.

“If the test is a matter of life and death, and if death means you can take organs, you want certainty. I think some of that certainty has been taken away by this case,” he told Sky News.

“Rather than people who were sceptics being a minority, I think there are a lot more people who have become sceptical of the test, at least in relation to children.”

An NHSBT spokesperson said: “There are strict criteria in place in the UK to provide safe, timely and consistent criteria for the diagnosis of death, provided by the Academy of Medical Royal Colleges.

“As medicine advances, new treatments and clinical practice means that protocols must be updated accordingly, and any new learnings shared. Clinicians pay particularly close attention to any rare or unusual cases, to ensure that the highest standards for patient and donor care and safety continue to be upheld.”

Read more from Sky News:
Pig hearts transplanted into brain-dead humans in organ shortage
Podcast: How do we bring to life a conversation about organ donation?

NHSBT refused to comment on whether a moratorium should be in place until the ARMC’s expert group review is published.

Professor Jones said: “I think that if there isn’t a moratorium then at the very least all parents ought to be informed that this has happened and that this is a risk.

“But in the meantime I think that it shouldn’t be used on young children.”

Parental consent in such cases is not straightforward.

In June, the High Court ruled against the parents of 12-year-old Archie Battersbee after Barts Health NHS Trust took them to court to brain stem test him on the recommendation of doctors who said he was brain-dead.

After a legal battle lasting weeks, Archie’s life support machine was switched off and he died on 6 August.

Another two COVID deaths and 1,770 cases in UK – lowest since early September