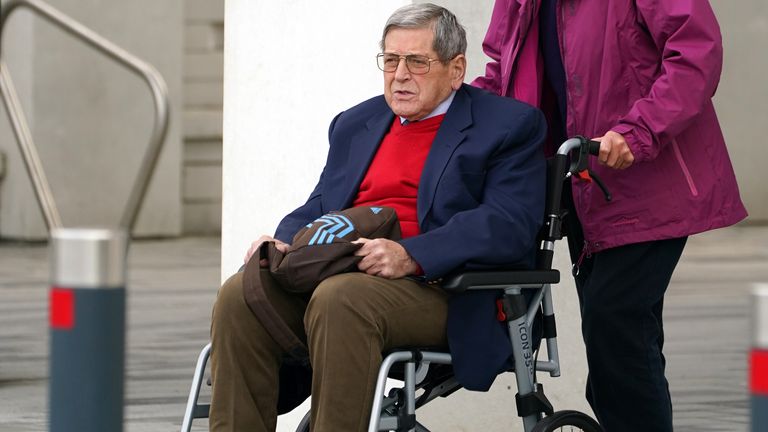 A married man who murdered his lover and her young son more than 45 years ago will likely die behind bars.

William MacDowell, 80, was sentenced to life in prison with a recommendation that he serve a minimum of 30 years for killing Renee and Andrew MacRae in November 1976.

MacDowell, of Penrith, Cumbria, killed the mother and son at a layby near Dalmagarry on the A9, about 12 miles south of Inverness.

Mrs MacRae’s BMW car was discovered on fire in the layby but the bodies have never been found.

This is despite a huge police investigation after the disappearances and further investigations in 1986, 2004 and 2018.

The double disappearance was one of the longest unsolved murder cases in Scottish criminal history.

Officers are now urging MacDowell to disclose what he did with Mrs MacRae and her son so they can be “provided with the dignity they deserve”.

MacDowell, who was married while having a relationship with Mrs MacRae, who was separated from her husband, had been trying to keep their four-year affair secret.

Alex Prentice KC said during the trial MacDowell was the only man with a motive for killing the pair, as his concern grew that news of his affair would be revealed and what that would mean for his finances and lifestyle.

“Life for Bill MacDowell would change dramatically if it all came out in the open. He would lose his job, his family and his home,” Mr Prentice said.

MacDowell, who was brought into court each day in a wheelchair by his wife Rosemary, claimed the murders were committed by Mrs MacRae’s estranged husband Gordon MacRae and others unknown.

Murders were carried out in ‘most calculated way’

Mrs MacRae’s sister, Morag Steventon, said after the conviction: “Almost 46 years on, the pain of losing Renee and Andrew in such a cruel and brutal fashion never fades.

“Today there is finally justice for them. It’s a day we feared would never come

“They were both so precious to us and a day never passes without them both in our thoughts.”

Passing sentence after MacDowell was found guilty of the murders at the High Court at Inverness, judge Lord Armstrong told him: “These murders appear to have been premediated, planned and carried out in the most calculated way – not a spontaneous event or spur of the moment.”

He added: “These appear, in effect, to have been executions.

“You murdered your victims and then disposed of their bodies and personal effects, including the boy’s pushchair.

Police ‘sympathise with frustrations’ of those who wanted case solved sooner

MacDowell was also found guilty of attempting to defeat the ends of justice by disposing of the bodies and personal effects.

Operation Abermule, the latest investigation into the murders, was set up to find the killer and to discover the resting place of the pair’s bodies almost 46 years after they were killed.

So far, it has only achieved one of its aims – the conviction of MacDowell following his arrest in 2019.

It has involved more than 1,500 witnesses, many of them either deceased or no longer able to give evidence in court.

“There is no doubt that the team that we had from 2018 onwards uncovered evidence that hadn’t been focused on before,” DCI Geddes said.

“We have certainly improved the known circumstances around Friday November 12 and beyond.”

The police officer said he could “sympathise with lots of frustrations why it’s taken so long” for a conviction.

But he stressed: “We have now achieved what we set out to achieve in 2018.

The Queen returns to royal duties after Prince Philip’s death

Bermondsey stabbing victims were all from same family