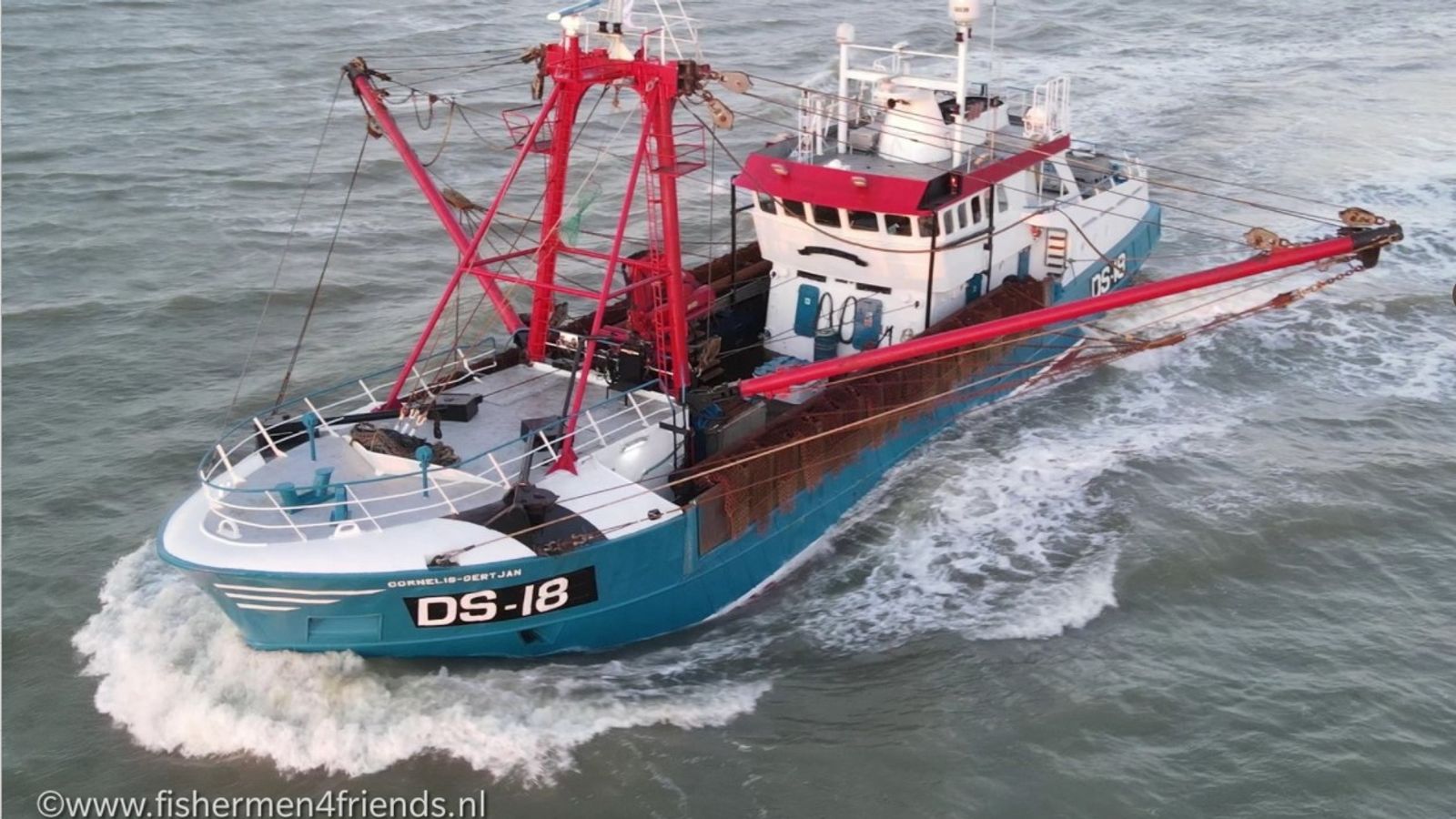 France has detained a British scallop trawler owned by Macduff Shellfish and given a verbal warning to another fishing boat in waters off its coast.

French maritime minister Annick Girardin said it is “not war but this is a combat”, amid a warning the country could ban allowing British fishing boats to disembark at French ports from next week if tensions are not resolved.

Clement Beaune, France’s Europe minister, said on CNews TV: “So now, we need to speak the language of strength since that seems to be the only thing this British government understands.”

Andrew Brown, director of Macduff Shellfish which owns the detained vessel, told Sky News the boat was being used as a “pawn in an ongoing dispute” between the two countries.

He said: “On 27 October, Macduff’s scallop vessel Cornelis was boarded by the French authorities and ordered into the French port of Le Harve while legally fishing for scallop in French waters.

“It appears our vessel is another pawn in the ongoing dispute between the UK and France on the implementation of the Brexit Fishing Agreement.

“We are looking to the UK government to defend the rights of the UK fishing fleet and ensure that the fishing rights provided under the Brexit Fishing agreement are fully respected by the EU.

“We will vigorous defend ourselves against any vexatious claims.”

Environment secretary George Eustice told the Commons on Thursday: “My officials are investigating the circumstances are this vessel that has been detained in France. It is too early to identify precisely what happened. But I have seen reports that it was on a list originally and then appeared to not be on a list.

“But it is something I have asked officials to urgently investigate.”

In a tweet, the French Maritime Ministry said: “This Wednesday, two English ships were fined during classic checks off Le Havre.

“The first did not comply spontaneously: verbalization.

“The second did not have a licence to fish in our waters: diverted to the quay and handed over to the judicial authority.” 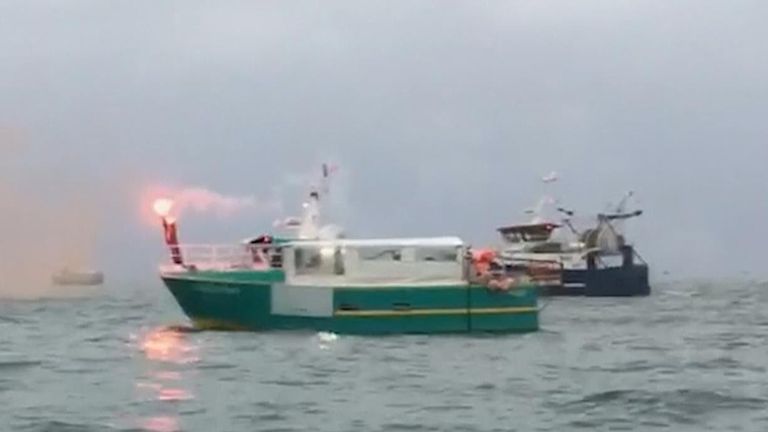 One trawler was fined for obstructing checks after it initially refused a request to be boarded by police. It was later not found to have been in breach of regulations.

It is the latest twist in an increasingly bitter dispute between Britain and France over fishing rights.

France says its fishermen have not been issued with half the licences they are entitled to allowing them to fish in British waters under the terms of the Brexit agreement.

France protested against the decision last month by the UK and the Channel Island of Jersey to refuse dozens of French fishing boats licences to operate in their territorial waters.

France has now released a list of sanctions that could apply from 2 November if the row is not resolved:

Mr Beaune said the number of licences awarded was “not enough and not acceptable”.

The country considers these restrictions contrary to the post-Brexit agreement the UK signed when it left the EU.

However, the British government said it has granted 98% of licence applications from EU vessels to fish in its waters.

Members of the fishing industry have said Wednesday’s incident has been “politicised” by France which is “determined” to escalate the issue.

France has stepped up its rhetoric, its threats and now its actions in this dispute. It is one thing to say you’re going to get tough; it’s quite another to force a British fishing boat into harbour.

The British government maintains it has issued licences to 98% of EU vessels who want to enter the nation’s coastal waters.

Ms Girardin says those figures are false and that it should be 90.3%, suggesting that the missing near-10% are French fishermen: “They have been waiting patiently for nine months and we have reached our limit.”

But this isn’t about all of British waters. It’s about a certain zone, between 6 and 12 miles from the coast, as well as the waters around Jersey.

So why do all this?

Firstly, Emmauel Macron is aware that, with a Presidential election on the horizon, he wants to shore up his support in northern France, where fishing is a potent topic.

He also thinks that picking a fight with Britain has political value. The AUKUS submarine deal infuriated Macron and, after years of Brexit wrangling, there is mistrust of Westminster politicians.

Macron is keen to portray himself as the de facto political leader of the EU and, right now, having a row with Boris Johnson won’t do him any harm. There is still a lot of resentment around Europe not just that the UK decided to leave the gang, but at the rancorous nature of the departure. Sympathy for Britain is in short supply.

France also feels emboldened to do this because it is supported by all the other coastal nations in the European Union. If British boats were banned from Boulogne, for instance, ports in Belgium or the Netherlands would be very unlikely to accept them either.

So will it come to that? France says it will introduce its measure on Tuesday, unless there has been significant progress. The UK says the threats are disproportionate and illegal. Neither side will want to back down. As ever, the combination of Brexit and fishing seems explosive.

However, Mr Girardin said it is “not serious” to suggest the country could switch off electricity to the UK.

It comes after government spokesman Gabriel Attal earlier highlighted that France’s supply of electricity to Britain could be subject to sanctions introduced if “there is no change in policy”.

Barrie Deas, from the National Federation of Fishermen’s Organisations, the body representing fishermen in England, said descending into a “tit for tat” relationship between the nations was “unhelpful”.

He said: “(The amount of) UK vessels landing into French ports is not massive.

“It’s a bit strange because the French fleets fish much more in UK waters than we fish in their waters.

“Therefore if we descend into a tit for tat relationship, I think the French fleet are very much more exposed – I don’t think that’s a very helpful way to go.” 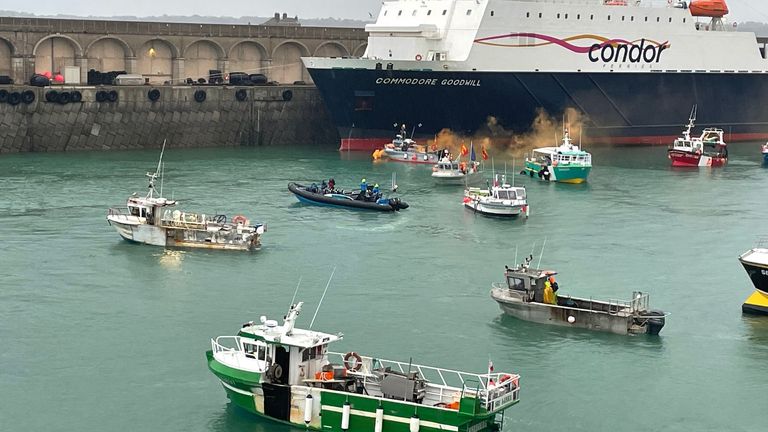 A UK government spokesperson said it would be relaying its concerns to the EU Commission and French government.

It said: “France’s threats are disappointing and disproportionate, and not what we would expect from a close ally and partner.

“The measures being threatened do not appear to be compatible with the Trade and Co-operation Agreement (TCA) and wider international law, and, if carried through, will be met with an appropriate and calibrated response.”

Woman, 21, trying to join fiance in UK is first identified victim of Channel tragedy
US, China and UK among nations joining forces in bid to ease oil prices
‘Either we kill it, or it will kill us’: The fight to dismantle a shadow court system threatening climate goals
‘No longer welcome’: France cancels meeting over Johnson’s migrants letter
Kia unveils new Niro revamped from the ground up with sustainability in mind