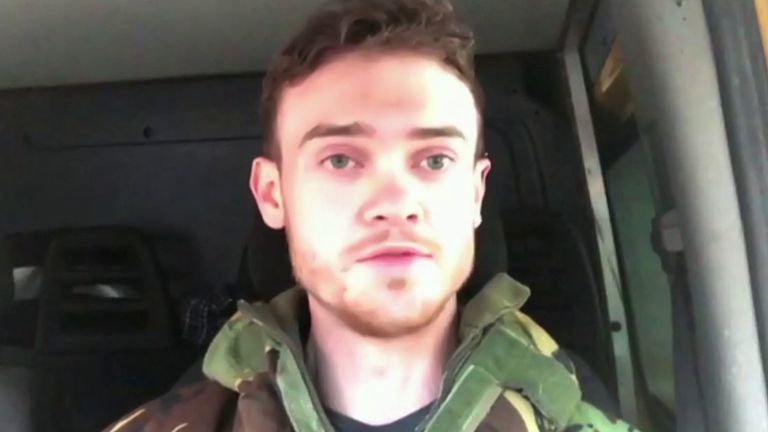 It’s hard to imagine the bravery it takes to drive a van into a hotzone on the frontline, artillery fire exploding all around as you try to evacuate as many people as possible.

Chris Parry didn’t know much about Ukraine before Russia invaded in February last year, but as soon as he saw news of the invasion he knew he had to go to help.

He spent months going into recently liberated villages on some of the most dangerous parts of the frontline where he rescued hundreds of civilians.

Confirmation of his death on Tuesday comes after he and fellow Briton Andrew Bagshaw went missing after setting out for the embattled city of Soledar.

Originally from Cornwall, 28-year-old Mr Parry was living in Cheltenham and working as a running coach before the war.

He flew out to Poland and then crossed the border into Ukraine on 5 March.

It wasn’t long before he had loaded up a van with supplies and set out to Kharkiv with a few others, taking back roads and on the lookout for the Russian soldiers that could be anywhere.

“It was a ghost town,” he told Sky News in November.

“We were driving on the main highway into Kharkiv from the south and I remember passing one tank on the back of a lorry in blizzard-like conditions.

“And there was no one else on the road – and this is like the M5 equivalent so it was very, very peculiar.

“My companions were like ‘yeah this is getting a bit scary now’.”

‘I almost crashed on first trip to Kharkiv’

He said this first experience of the real war was “eye-opening”.

He told Sky News in November: “I look back on it very fondly because it was such a huge adventure.

“We broke down so much and we had so many issues because of the road conditions, we got stuck in the snow, I almost crashed.

“Lots of things happened, but we survived and that’s the most important thing.”

It seems that wherever the battle was hottest, that was where Chris headed, determined to save as many people as he could.

He did evacuation runs out of Severodonetsk as Russian forces closed in, getting people out of the besieged city before it finally fell in June.

“That was getting shelled every minute or so,” he said.

‘We were being shelled by artillery… they were watching us’

The time eventually came when he made the difficult decision to tell his parents that he had been working in Ukraine for weeks, and not in Poland as they had thought.

He didn’t want to worry them more than he needed to, but he also wanted to tell his story to spread the word about what was happening in Ukraine and how people could help.

In the days after he went missing, his family praised his compassion and care for others, and spoke of their pride in what he was doing.

Speaking to Sky News about a notable evacuation in a village east of Lyman in November, he described the scary moment they were fired upon by Russian forces.

“We were being shelled by artillery because they were watching us with a drone, and then waiting for us to park up and then they had a minute or two to try and hit us.

“We were getting hit by that quite a lot. So running to the car with people, trying to get in the car and then driving off as soon as possible was pretty high on the priority list.”

Rescuing a family who had lived in a basement for months

In another operation, he described how he and his team rescued a family that had been sheltering for months.

“I picked up a woman and she had four young children from the age of five to 12, and they had been living in their basement under occupation since March.

“Her husband had been taken by the Russians, so of course they’re extremely concerned about him.

“We eventually got them to safety. In the car they were crying, just terrified.

“But when they came here and they got out and we got them a bed and lights are on, they give me a big hug – they’re just overwhelmed with joy but also at the same time that’s when the shock really hits them.

“Because there’s no more bangs, they’re safe and it’s kind of over. But they’ve left everything behind.”

Man arrested after baby and toddler die in flat fire

Cost of living: Price of groceries could go up by £1.7bn as carbon dioxide price surges

‘I became the devil’: Trauma of ex-rugby international wrongly suspected of murdering an entire family