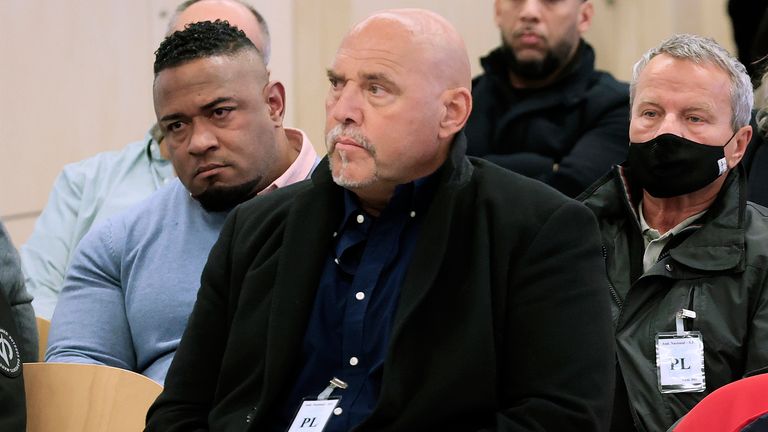 A former leader of the Hells Angels in Europe could face 13 years in prison if he is convicted of running a chapter of the motorcycle club linked with organised crime on the Spanish island of Mallorca.

German national Frank Hanebuth appeared in court alongside 49 alleged collaborators from numerous countries, at least 34 of whom agreed to a plea deal allowing them to pay fines instead of serving time.

Hanebuth did not seek a deal.

Some of the defendants were of German, Greek or British origin and needed an interpreter to follow the developments, which were conducted in Spanish.

Three of the accused took part via video link from Germany.

Spanish prosecutors have charged Hanebuth with membership in a criminal organisation, money laundering and illegal possession of firearms.

They are also asking the judge overseeing the trial to fine him €4.2m (£3.7m) for the money laundering charge.

In addition to belonging to a criminal organisation, other defendants have been charged with running a prostitution ring and drug trafficking, and face up to 38 years in prison.

The Hells Angels conducted illegal activities in Mallorca from 2009 to 2013 under Hanebuth’s leadership, according to the criminal indictment.

They also moved into real estate on Mallorca and nearby island Ibiza, prosecutors said.

The Hells Angels in Europe are believed to have chosen Mallorca because of a large number of foreign residents and other money laundering and drug trafficking schemes.

The Mallorca chapter of the gang was strongly international, with recruits from as far away as the Dominican Republic and Morocco, according to the indictment.

One of the defendants who took a plea deal was Paul Witworth, a British associate of Hanebuth’s who prosecutors say maintained links with the Adams family, a notorious UK gang also known as The Clerkenwell Crime Syndicate.

Hanebuth also kept up with his German base in Hanover, prosecutors said.

The trial is expected to last several weeks.

Joe Biden asks for dead congresswoman in gaffe during speech