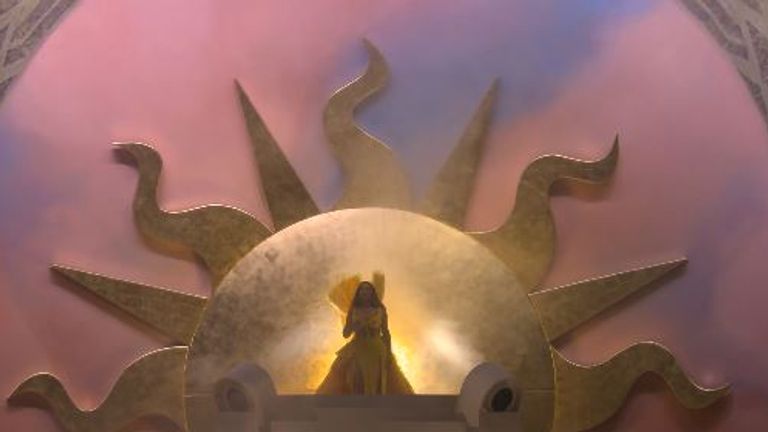 Beyonce has taken to the stage for her first performance since 2018 at a private hotel launch event in Dubai – and was joined by her daughter Blue Ivy at one point for a duet.

The 41-year-old US star put on a 90-minute set for the concert at the unveiling of Atlantis The Royal, billed as the world’s most ultra-luxury resort.

Beyonce emerged in front of a 1,500-strong crowd in a yellow sequinned gown with a sculptural feathered cape, opening with her cover of Etta James’s At Last.

She also sang some of her biggest hits including Crazy In Love, Naughty Girl, Halo and XO, culminating with a rendition of Drink In Love as fireworks lit up the sky.

Eleven-year-old Blue Ivy gave the audience a surprise when she joined her superstar mother for a duet on stage on Brown Skin Girl from the 2019 album The Lion King: The Gift.

Members of the crowd were told to put their phones in pouches and were reportedly reprimanded by security if they were spotted taking photos.

The headline concert leaned heavily on songs rarely or never before performed live, with the singer opting not to debut any tracks from her latest album Renaissance, which is nominated for two Grammys.

Addressing the excited audience, Beyonce said: “There’s a Utopia of people from all over the world on this stage and we are so honoured to be here to celebrate this night with you.

“My parents are here tonight to celebrate – my mother and my father. My beautiful children are here to see me perform and my beautiful husband.”

The Destiny’s Child star later changed into a red and gold bejewelled bodysuit with a voluminous train before completing a third costume change with a red corseted minidress with matching stockings and gloves.

She was reported to have been paid $24m (£19.4m) for the exclusive concert, attended by celebrities including Kendall Jenner, Liam Payne, Ronan Keating, Rochelle and Marvin Humes and British Vogue editor Edward Enninful.

“We’ve given her creative control. This is her art – we want her to express her art in her way,” managing director Tim Kelly said.

“I can’t express to you enough the level of professionalism and discipline with the rehearsals.

“From the moment she arrived last week, she was on the stage, rehearsing and performing, and she’s developing and curating a performance.

“She’s not taking a show out of the box because she doesn’t have a show in the box. You’re going to get the full-throttle Beyonce.”

Mr Kelly added it “took a long time” to secure the global pop star for the launch, but said it “came together rather quickly”.

He said: “It’s a circumstance of where she chooses what she wants to do. We’re honoured, we’re proud and for her to be here to do this in Dubai on this night, it’s a once-in-a-lifetime opportunity.

“We have always expressed that this is an iconic building, and then to have the most iconic performer on the planet available today, someone who hasn’t been seen in public performing in over four years, it’s really a night of icons.”

Beyonce has not headlined a live show in more than four years, the last being the Global Citizen Festival in Johannesburg, South Africa, in December 2018.

Theophilus London: Family reports rapper missing as they urge him to ‘send us some signal’