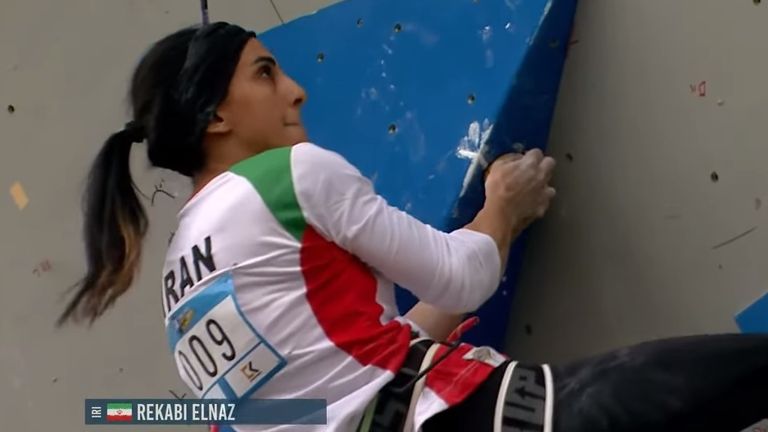 An Iranian climber who took part in an international competition without wearing a hijab has insisted it was “completely unintentional”.

Wearing the hijab is mandatory for female athletes from the Islamic Republic, but at the event in South Korea on Sunday Elnaz Rekabi did not wear one.

It follows a wave of protests in Iran over the past month which were sparked by the death of Mahsa Amini who was detained by the country’s morality police over her clothing.

Since the 22-year-old’s death, women in Iran have been removing their hijabs in public to make a stand.

The demonstrations represent the most serious challenge to Iran’s theocracy since the mass protests surrounding its disputed 2009 presidential election.

After receiving a hero’s welcome on her return to Iran on Wednesday, Ms Rekabi told a state TV reporter: “If I want to explain I should say that everything conforms to what I explained on the internet. It was completely unintentional. I think my (Instagram) story fully explained this.

“I was unexpectedly called and I had to compete. I was busy putting on my shoes and technical gear and that caused me to forget putting on the hijab I had to be wearing. Then I went to compete.

“Fortunately, I came back to Iran with peace of mind, although I went through a lot of tension and stress, so far, thank God, nothing has happened.”

An Instagram post on an account attributed to the athlete on Tuesday described her not wearing a hijab as accidental – though it was not clear whether she wrote it.

The post that appeared on Instagram apologised for “getting everybody worried” and explained: “Because I was busy putting on my shoes and my gear, it caused me to forget to put on my hijab, and then I went to compete.”

Video shared online appeared to show large crowds gathered early on Wednesday at Imam Khomeini International Airport outside of Tehran, the sanctioned nation’s main gateway out of the country.

The worst was feared for Elnaz Rekabi when her family lost contact with her and then she was put on an early flight back to Tehran, but she was welcomed home as a heroine by thousands who gathered at Imam Kohimeni airport, in extraordinary scenes early this morning.

She is anything but a heroine in the eyes of the Iranian regime and might yet face retribution for competing without a head-covering, but her new status has brought her international recognition and therefore, perhaps, some protection from the heavy-handed crackdown.

Most don’t believe the excuse she gave on Instagram and in an interview – that her hijab fell off “inadvertently” whilst competing – instead believing that to be delivered under some form of duress from her minders. The language used in her social media post has similarities with forced apologies in past cases.

As widespread and popular as it is, the Iranian uprising, now in its fifth week, so far lacks any form of leader to coordinate the protests and directly challenge the government; Elnaz Rekabi will not be that figurehead, but she is a part of the cause, and her bravery has seemingly given the protesters inspiration and courage to carry on.

The 33-year-old athlete was seen walking into one of the airport’s terminals, filmed by state television cameras, and wearing a black baseball cap and a black hoodie covering her hair. She received flowers from an onlooker.

Outside, she apparently entered a van and slowly was driven through the gathered crowd, who cheered her. It wasn’t clear where she went after that.

A friend and former member of the national ice climbing team has said she is “very concerned” for Rekabi.

In a statement shared on Instagram, Zeinab Moosavi said: “Considering all the events that have happened, all of Iran and the world are worried about Elnaz’s condition after her arrival in Iran.”

‘Not my choice to be here’: Hamilton condemns Saudi Arabia’s ‘terrifying’ LGBTQ+ laws before race