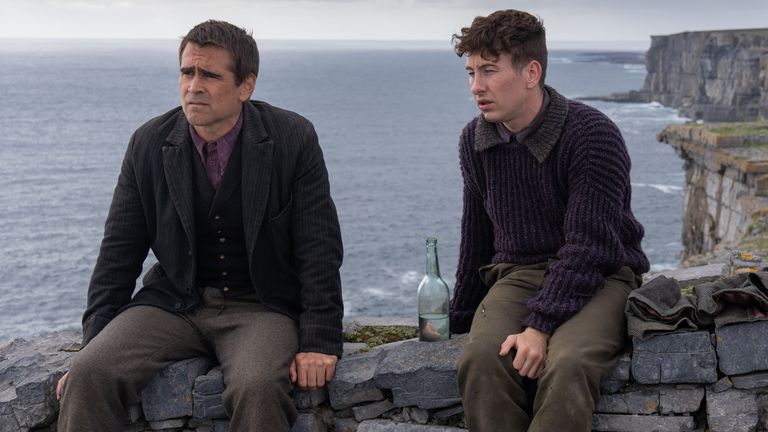 For Colin Farrell, reuniting with Brendan Gleeson on-screen 14 years after they made the award-winning In Bruges felt like having “the band back together”.

“Me and him have been circling each other in the interim, you know… and it was just like bringing the band back together,” Farrell told Sky News.

It was playwright Martin McDonagh who first cast the pair in his 2008 cinematic debut, now considered a modern classic.

Since then, the filmmaker went on to make the Oscar-winning film Three Billboards, while in the background he was receiving some gentle nudging from his former leading men.

“We kind of said, we hoped, hopefully we can do this again,” Farrell confesses.

The Banshees of Inisherin is worth the wait. The darkly comic drama is like few films you’ll see in the cinema.

Set on a remote imaginary island off the Irish Coast in the 1920s, Gleeson’s character decides he’s sick to the teeth of his needy friend (Farrell) and doesn’t want to waste any more time chatting to him.

He raises the stakes by threatening to chop off a finger every time his dull pal tries to strike up a conversation.

When Sky News puts it to Gleason that it’s painful to see how cruel he is to Farrell, he laughs.

Before Farrell interrupts: “That’s what he’s always doing – putting the blame back…”

“You know, watch it the second time. I think you’ll see…” Gleeson insists.

“Watch it the third time, you go back to your first perspective!” Farrell teases again.

McDonagh admits a trilogy might just be on the cards, saying: “You know, we might not be around in 14 years. So, we sort have agreed on seven years gap between films is just about right. But I have no idea what that will be.”

Farrell – who says he struggles to watch himself on screen, says there is something “extraordinary” about McDonagh’s writing.

“I was shocked when I saw the film and, to be honest I’ve said it before ad nauseam, it’s true, I have very little keen objectivity in relation to films that I’m in. There’s too much s*** going on in my own head and I ruin it, my presence ruins things for me.

“But when I watch this, the one thing I came away with that I thought was extraordinary, was how much empathy I had for [Brendan’s] character.”

The two are back to their well-tuned, X-rated patter, suggesting that In Bruges fans have plenty to look forward to in the latest instalment of McDonagh’s black comedy.

The Banshees of Inisherin is out in cinemas on Friday.