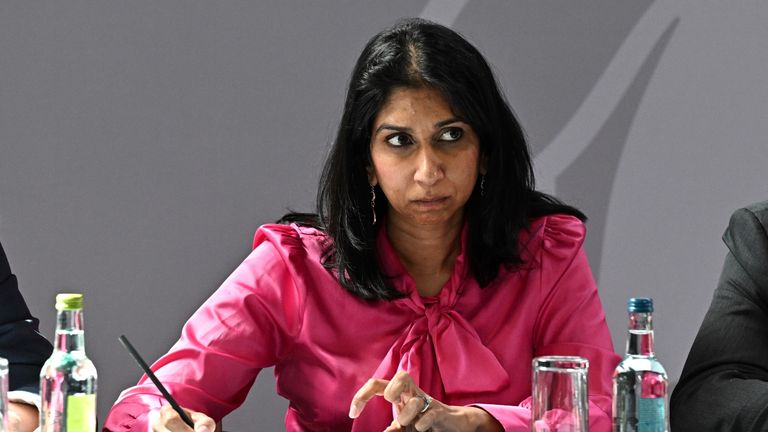 Grant Shapps has been appointed as the new home secretary, replacing Suella Braverman after her shock resignation.

The former transport secretary, who backed Rishi Sunak in the Tory leadership race and has been critical of some of PM Liz Truss’ policies, has been confirmed by Downing Street as now heading the Home Office.

Sky’s deputy political editor Sam Coates said it was perhaps “unsurprising” that Mr Shapps’ name was in the frame, as he has “caused havoc” since being removed from the cabinet by Ms Truss.

Coates said Mr Shapps did not take his sacking “lying down” and helped coordinate the rebellion over the 45p tax rate – “the beginning of the end for that mini-budget”.

And it would be “a very good reason” to bring him back into the fold – “to remove the thorn from her side”.

Ms Braverman was only appointed to the role 43 days ago by the new prime minister.

Ms Braverman resigned after sending an official document from her personal email in a breach of the security rules for government.

In an explosive resignation letter which also voiced “concerns” about the direction of the government, the now former home secretary said: “Pretending we haven’t made mistakes, carrying on as if everyone can’t see that we have made them, and hoping that things will magically come right is not serious politics.”

She added: “I have made a mistake, I accept responsibility, I resign.”

She also expressed “concerns” that the government had already “broken key pledges that were promised to our voters”, and said she is worried about “the government’s commitment” to other manifesto policies, including reducing overall migration numbers.

Ms Braverman’s shock departure comes as Ms Truss fights for her political survival following the sacking of chancellor Kwasi Kwarteng last Friday and the axing of the majority of the government’s mini-budget on Monday by new chancellor Jeremy Hunt.

Conservative former minister George Freeman has vented his frustration on Twitter amid the ongoing turmoil in his party.

He said: “The home secretary ‘resigns’ attacking the PM and government program she had supported?

“The chancellor ‘resigns’ for implementing the policies he and PM and cabinet had agreed?

“Enough is enough. The cabinet need to get a grip, fast, to restore collective responsibility and confidence.”

Government ‘falling apart at the seams’

Labour’s shadow home secretary Yvette Cooper said the government “can’t even manage the basics” in the wake of the resignation of her opposite number.

She said the Tory administration was “falling apart at the seams”, adding: “To appoint and then [lose] both your home secretary and chancellor within six weeks is utter chaos. This is no way to run a government.”

The Liberal Democrats described Ms Braverman’s exit as the latest in a “carousel of Conservative chaos”.

“There is a cost of living catastrophe, health service crisis and now a rudderless Home Office.

“The only solution now is a general election so the public can get off this carousel of Conservative chaos.”