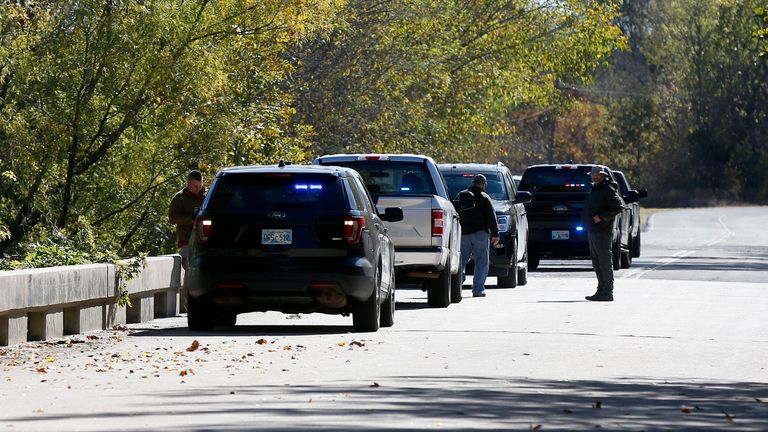 A man has been arrested in Florida after the bodies of four missing people were found shot and dismembered in a river.

Joe Kennedy was stopped by officers after being spotted driving a stolen vehicle in the city of Daytona Beach Shores on Monday, local police chief Joe Prentice said.

The 67-year-old, who has been described as a “person of interest” in the deaths of the four men, was swiftly arrested and is set to be taken to Oklahoma, where the bodies were discovered, to be questioned.

The victims have been identified as four friends who went missing on 9 October: Mark Chastain, 32, Billy Chastain, 30, Mike Sparks, 32, and Alex Stevens, 29.

Mr Prentice has declined to say Kennedy is a suspect in the killings, and has said “a murder investigation is ongoing”.

The dismembered bodies of the men were discovered in the Deep Fork River in Okmulgee, a town about 40 miles (65km) south of Tulsa, on Friday.

A witness told police he was invited to join the group to “hit a lick”, but explained that he did not know what the phrase meant, Mr Prentice said.

“That is common terminology for engaging in some type of criminal behaviour,” Mr Prentice added. “We do not know what they were planning or where they planned to do it.”

Kennedy disappeared after the bodies were discovered, but had been questioned beforehand, when he denied knowing any of the victims.

Investigators have searched a scrapyard owned by Kennedy and an adjoining property owned by other people, where evidence of a “violent event” was found, Mr Prentice said.

While an official cause of death has not yet been released, all four men were found dismembered and with gunshot wounds, the police chief said.