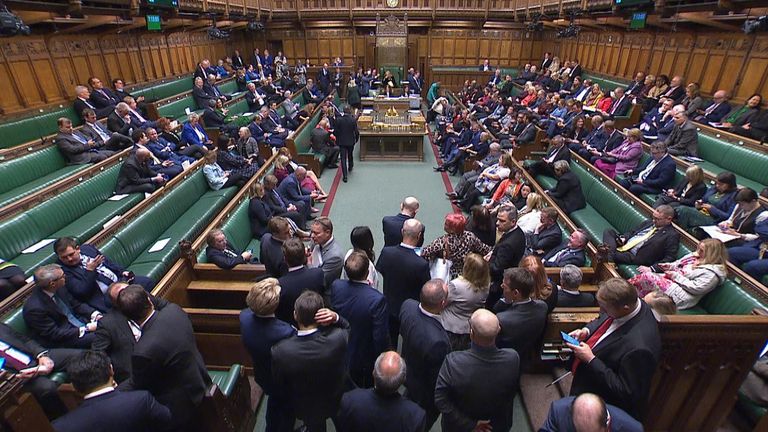 A Labour motion that would have forced a vote on a bill to ban fracking has been defeated amid farcical scenes in the House of Commons.

Politicians have claimed Conservative MPs were being “manhandled” and bullied into voting with the government to oppose a ban, counter to what their party manifesto said in 2019.

Conservative whips initially stated the vote on whether to allocate Commons time to consider legislation to stop shale gas extraction was being treated as a “confidence motion” in Liz Truss’s embattled government.

But after a series of Tory MPs signalled they would not take part in the vote, climate minister Graham Stuart caused confusion by telling the Commons: “Quite clearly this is not a confidence vote.”

In an extraordinary turn of events, there are now suggestions that the chief whip Wendy Morton has resigned, according to Sky’s political editor Beth Rigby.

Meanwhile the division list showed 40 Conservative MPs did not take part in the fracking vote at all – including Prime Minister Liz Truss.

It is not clear why the PM did not vote.

This is despite a three-line whip and all Tories being told they must vote in favour of the government.

‘Not entirely clear’ if chief whip is still in post

Jacob Rees-Mogg, the business secretary, told Sky News it is “not entirely clear” if the chief whip remains in her post when asked about the claims.

Mr Rees-Mogg was also probed on the allegations made by Labour MP Chris Bryant that some Conservative MPs shouted at and “manhandled” others in the voting lobbies to get them to vote with the government.

He said he did not see any bullying or physical contact “beyond a female affectionately patting someone on the back” – though “one member used an expletive”.

And he suggested that a junior official in Downing Street “erroneously” said Labour’s fracking motion was no longer a confidence vote – leading to it subsequently being said by Minister for Climate Graham Stuart in the Commons.

He said: “There was a bunch of Conservative members who were completely uncertain about whether they were allowed to vote with the Labour motion because of what had been said in the chamber about whether it’s a free vote or a confidence vote.

“There was a group – including several cabinet ministers – who were basically shouting at them. At least one member was physically pulled through the door into the voting lobby.”

He claimed Jacob Rees-Mogg, the business secretary, and Theresa Coffey, the deputy prime minister, were among the group that “moved forward with that one member” into the voting lobby.

Mr Stafford – who has previously spoken out against fracking – tweeted earlier today that he had met with Mr Rees-Mogg and got a “cast iron guarantee from the business secretary that for the first time ever, local people will be able to decide whether they want fracking”.

Mr Bryant said the behaviour seen in the lobby tonight was “completely out of order” and he had “never seen anything like that”.

He said he took a photo of the moment, which he will be handing to the chief whip as evidence.

“What is not fine is shouting in the division lobby, aggressing pointing and physical pushing,” he said.

230 MPs voted in favour of the motion, while 326 were against it, a government majority of 96.

Ahead of the Commons showdown, many Conservative MPs expressed disquiet about Ms Truss’s plan to return to fracking where there is “local consent”.

Chris Skidmore, the MP and governmental net-zero tsar, said he would not be voting with the government and was “prepared to face the consequences of my decision”.

A moratorium on fracking was imposed in 2019 after a series of tremors, and the Tory manifesto that year said they would not support it “unless the science shows categorically that it can be done safely”.

A government-commissioned report by the British Geological Survey (BGS) at the time suggested more data was needed, but despite the lack of scientific progress, Ms Truss’s administration has torn up the commitment.

Labour used an opposition day debate on Wednesday to put forward a motion which, if it had passed, would guarantee time in the Commons for a bill to ban the controversial gas extraction technique for good.

The government responded by saying it was not a motion on fracking, but a confidence motion in the government – and imposed a hard three-line whip.