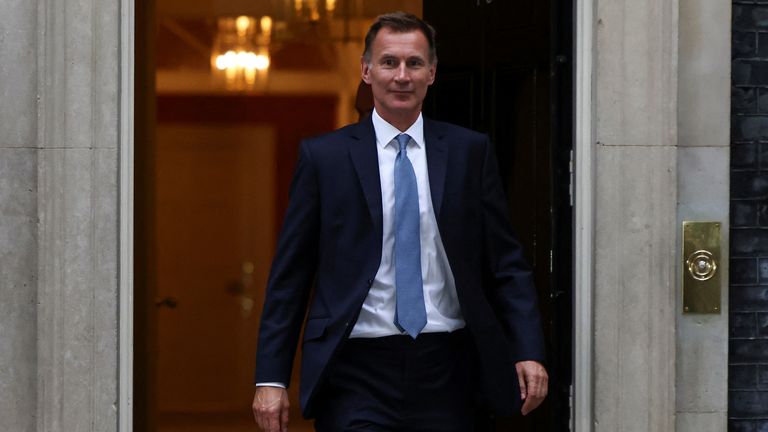 Here, Sky News looks at the runners and riders – and who is the favourite for the job.

He has insisted that Ms Truss is still in charge of her government, but has scrapped practically all of the economic vision that brought her to power.

But Mr Hunt has seemingly ruled himself out of a third run at the top job, telling Sky News’ political editor Beth Rigby: “I rule it out, Mrs Hunt rules it out, three Hunt children rule it out.”

Read more:
Jeremy Hunt – who is the UK’s new chancellor?
How could Liz Truss be removed?

However, she has since taken on the prime minister after suggesting that benefits should rise in line with inflation.

Ms Mordaunt was sent to the Commons on behalf of the PM to answer an urgent question on the sacking of former chancellor Kwasi Kwarteng on Monday.

Denying that Ms Truss was hiding “under a desk”, Ms Mordaunt acknowledged the swirling rumours around the possibility of a joint ticket, telling MPs: “I fully understand the optics of me appearing at the despatch box.”

There are doubts over whether he would want to be leader, having ruled himself out of this summer’s race despite being considered a frontrunner after “careful consideration and discussing with colleagues and family”.

The defence secretary told The Times on Tuesday that he wants to remain in his post amid speculation he could be a unity candidate if Ms Truss departs.

Mr Wallace rebuked his Conservative colleagues for playing “political parlour games”, telling the newspaper: “The public wants stability and security and if the government fails to deliver that then they will send us into opposition.”

But he has signalled he would likely quit if the government ditches a key pledge to boost defence spending.

On Monday, new chancellor Jeremy Hunt refused to commit to spending 3% of GDP on defence, telling Sky News’ political editor Beth Rigby he was “not giving any answers on any specific elements” of tax and spending policy.

Former culture secretary and ally of the former PM, Nadine Dorries, is one of those openly calling for Mr Johnson’s return.

“There is no unity candidate. No one has enough support,” she posted on social media.

“Only one MP has a mandate from party members and from the British public – a mandate with an 80 seat majority. Boris Johnson.”

Onshore windfarm ban to be lifted in government U-turn