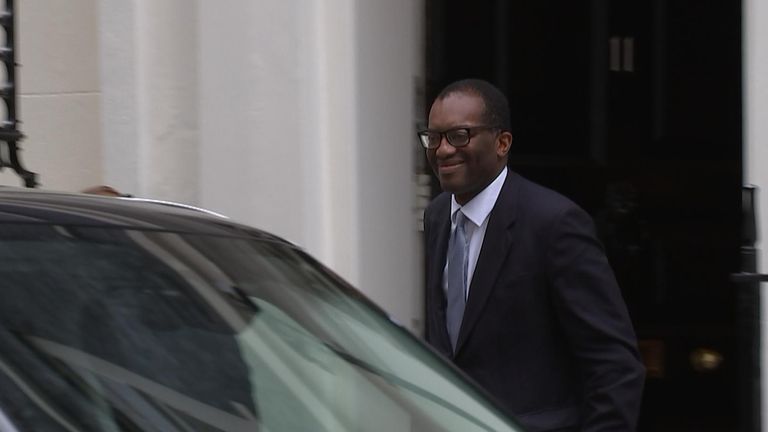 The pound has edged a little higher against the dollar in early Asia trading, following PM Liz Truss’s partial reversal of her initial economic plan.

It had fallen to a record low against the dollar at the end of September, after the short-lived then chancellor Kwasi Kwarteng unveiled the biggest programme of tax cuts for 50 years.

Mr Kwarteng’s downfall, after just 38 days in the job, not only pushed the pound to almost parity with the dollar, but sent the cost of government borrowing and mortgage rates up and led to an unprecedented intervention by the Bank of England (BoE).

However, following the prime minister’s announcement on Friday that corporation tax would rise to 25% from April next year instead of keeping it at 19% as part of the initial mini-budget, sterling gained 0.6% to $1.1245 on Monday in trade in Asia.

Mr Kwarteng, was sacked on Friday with former foreign and health secretary Jeremy Hunt replacing him, immediately promising to win back Britain’s economic credibility by fully accounting for the government’s tax and spending plans.

All eyes are now on how the UK government bond market will trade, after the BoE on Friday concluded its emergency gilt market support.

“If we do see a surge in gilt yields, then that would show that markets remain very sceptical about the debt sustainability
in the UK,” said Carol Kong, a currency strategist at Commonwealth Bank of Australia.

“I think sterling is likely to remain very volatile this week,” she added.

Read more:
Pound sinks to record low against the dollar – as PM and chancellor defend mini-budget
Bank of England ‘will not hesitate to change interest rates as necessary’ after pound’s fall

The Conservative Party is now on its fifth chancellor in the past three years – Mr Hunt, Mr Kwarteng, Nadhim Zahawi, Rishi Sunak and Sajid Javid.

Mr Hunt is the seventh Tory chancellor in 12 years.

There is now a renewed focus on whether Ms Truss can remain in the job.

A Tory MP told Sky News: “The idea that the prime minister can just scapegoat her chancellor and move on is deluded.

“This is her vision. She signed off on every detail and she defended it.”