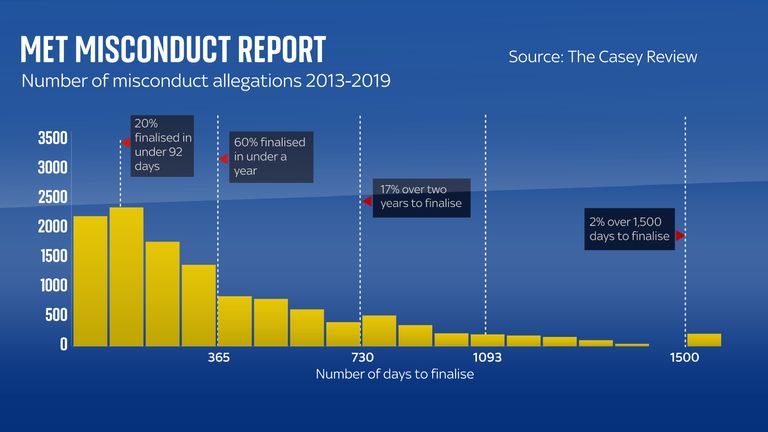 Scotland Yard’s commissioner wants to get rid of hundreds of officers and staff he says are guilty of crimes and unethical conduct.

A report has branded the Metropolitan Police’s internal misconduct system slow and ineffective and said too many repeat offenders were being allowed to keep their jobs.

One officer had faced 11 misconduct hearings over sexual harassment, assault, fraud and other allegations. Some cases were proved, others dismissed, but they were dealt with individually; he wasn’t fired and he’s still serving in the Met.

Sir Mark Rowley said: “We’ve been slacking a bit, removing less than one a week, maybe 40 or 50 a year. Based on this report, which clearly says that we have been far too soft, there must be hundreds in the organisation I need to get rid of.

The commissioner said current police regulations meant it was difficult to sack some officers who he was forced to keep on. The Home Office promised to review the rules and hinted it could introduce new laws.

The report’s author, Baroness Louise Casey, said the Met’s misconduct system was too slow, with cases taking an average 400 days to resolve. She also described it as racist and misogynist.

“The evidence around racial disparity in the Metropolitan Police’s misconduct system is so great, and so shocking, that even in 2021 81% of black staff and officers are more likely to be in the misconduct system than their white counterparts is truly awful,” she said.

“What I’m saying is the internal misconduct system is an example of what I would call institutional racism.”

She said a rule that allowed probationers to be sacked more easily was not being used fairly, with black officers 126% more likely than white recruits to be subject to what is known as Regulation 13. Asian officers were 123% more likely that white to be fired.

Dame Louise was asked earlier this year, by Sir Mark’s predecessor Dame Cressida Dick, to review the Met’s culture and standards of behaviour in the wake of a series of scandals: the murder, by a serving officer Wayne Couzens, of marketing executive Sarah Everard, the photographing of the bodies of two murdered sisters and the swapping of racist and misogynist text messages by officers at Charing Cross police station.

This interim report looked at the force’s misconduct system because it was considered the most urgent part of her brief.

She said that too many complaints from colleagues about other colleagues were being dismissed without action, leaving staff feeling that “nothing happens”. Accusations of sexual misbehaviour were less likely to be followed up than some others.

Dame Louise said in an official letter to Sir Mark: “The misconduct system is not delivering in a way that you, I, your officers or the public would expect it to.”

In his reply Sir Mark said: “The evidence is clear: the disproportionate way in which you have showed us black and Asian officers and staff have been treated shows patterns of unacceptable discrimination that clearly amount to systemic bias.

“The fact that allegations of racism or sexual misconduct and misogyny have less chance of being upheld is also completely unacceptable. Furthermore, it is clear that the Met’s systems and processes don’t support the right outcomes.

“You uncover painful experiences from those within our ranks who have suffered discrimination and hate from colleagues, only to have their hurt compounded by a weak response from the organisation. This cannot continue.

“I am sorry to those we have let down: both the public and our honest and dedicated officers. The public deserves a better Met, and so do our good people who strive every day to make a positive difference to Londoners.”

Dame Louise’s full review is expected to be published in the New Year.

Flu jab to be offered to 35 million people including secondary school pupils, amid warning of ‘challenging winter’

Harry Dunn’s grieving family had many dark, despairing days – but their fight for justice never wavered