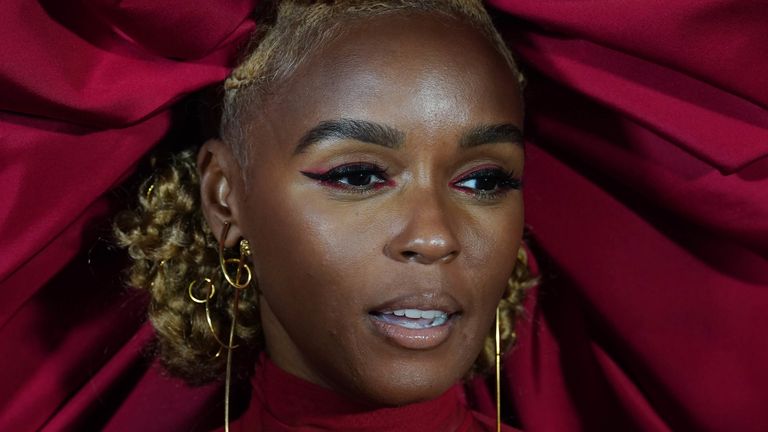 Whodunnit movie Glass Onion: A Knives Out Mystery has closed this year’s London Film Festival with stars telling Sky News how pleased they are the industry is back in full swing following the pandemic.

The follow-up to the 2019 hit Knives Out sees Daniel Craig reprising his role as detective Benoit Blanc.

“It’s just wonderful to be here at the London Film Festival on the closing night,” the Bond star told Sky News.

“Especially with the standard of film this year, which has been so amazing – to be in that number is just exceptional.”

The rest of Glass Onion’s ensemble cast, including Edward Norton, Kate Hudson and Janelle Monae are new to the franchise.

The movie was shot partly in Greece during the pandemic, which meant the cast grew close as they were forced to spend time together.

“I mean, it was an amazing experience,” Craig said.

“We were under lockdown, so we were kind of restricted in our movements so we couldn’t really go very many places.

“It was about 150 degrees in the shade, but, you know, those are high class problems.”

“It was good fun, with a lot of hard work in between, you know?” she said.

“But we were a good work-hard, play-hard cast, so we were very well suited for each other, we had really good times.

“It was COVID, so it kind of forced us to have to play with each other for three months, so we ended up getting really close and it was really fun.”

The film is screening in London following its world premiere at the Toronto International Film Festival.

Both are fully in-person events this year, and Hudson says she’s “more than delighted” about that.

“It’s so important to celebrate film and all of the great artists that have really worked their entire lives to be able to bring art to people through cinema.

“And so these festivals are… I just love them, I love being a part of them and it’s nice for everybody to be back in the theatre.”

Writer and director Rian Johnson also brought the first Knives Out to the London Film Festival three years ago.

He told Sky News that assembling the cast for the follow-up wasn’t easy on paper, but worked out very well.

“I feel so incredibly lucky this gang of actors signed on board for this – I mean everyone’s so busy these days, it’s always hard getting a group of people to commit to coming out to do something,” Johnson explained.

“But if you had told me when I started writing the group that we would get, I would get very nervous and probably not be able to finish writing.

“But I mean, everybody – the fact that we got to work with Kathryn Hahn, Edward Norton, Kate Hudson, Janelle Monae, it’s absolutely kind of a director’s dream, made my job very easy.”

With early reviews for the film very positive, attention now turns to the third.

In 2021, Netflix paid for two Knives Out sequels in a deal reported to be worth almost £400m.

And Johnson says he and Craig are very happy to keep going – admitting they have a great deal of fun on set.

“There is a lot of giggling that happens between us when we’re shooting, I mean, that’s the whole reason we’re here,” he said.

“That’s the real reason we’re keeping making these things is because on the first one we had so much fun together and just got along so well, and on this one it felt like it was maybe even more fun.

“So we’ll see – as long as these keep being fun and as long as we feel like we can find a different thing to do each time to keep surprising the audience and keep it fresh, we’ll keep making these.”

Audiences in the UK will have to wait a little longer for Glass Onion, though – it’s not out in cinemas here until November, and will be on Netflix the following month.

Jetson’s Bolt Folding E-bike is a great way to get around this fall at $339, more in New Green Deals