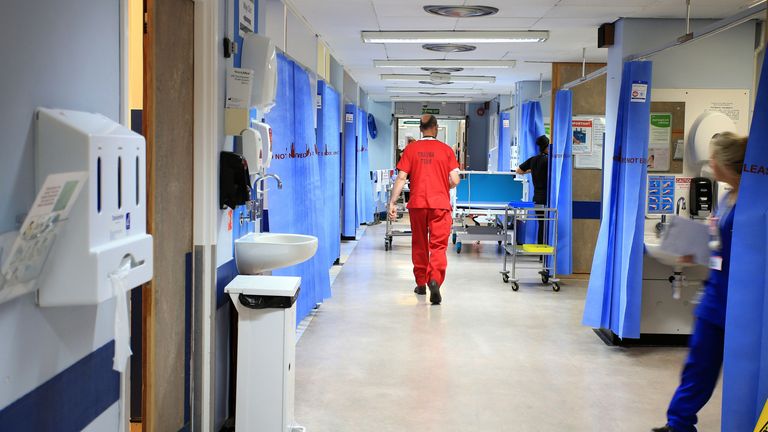 The power of play to help children cope with time in hospital should be prioritised rather than seen as “optional”, a charity has warned.

Research by the health play organisation Starlight has found that access to play in hospitals has fallen since the pandemic, partly due to funding pressures, but also because of concerns about controlling infection.

Now Adrian Voce, the charity’s head of policy and public affairs, wants to see “mandatory health play services” in every healthcare setting where there are children.

“Hospital can be a strange environment, sometimes scary, and the health play specialist helps to make [children] feel more at home,” he said.

“It’s very important for their overall mental health and wellbeing that they have daily opportunities to play… so we’re working with NHS England to look into questions of standards, guidance and most importantly for all health authorities to make the funding available to provide the services that children need.”

Hundreds of healthcare settings applying for resources such as toys and games from Starlight were surveyed, and the results revealed that 83% don’t have access to a play budget at all.

In addition, a quarter of settings surveyed don’t employ any health play specialists, a 7% increase since last year.

At Kingston Hospital in Surrey, there are five play specialists, among them is Julie Morris.

It’s a job she describes as “incredibly rewarding”, which goes way beyond simply playing.

“It can be preparing children for procedures. It can be getting children used to having blood tests, observations, and then going through that whole hospital journey, so they’re able to cope with things when they get home,” she said.

“We do have parents that come in and have told us about their experiences, and it’s been really, really tough for them not to have play and just somebody to come and check on their child every day and just give them a break and provide fun activities.”

‘It helps him not focus on what he’s going through’

Lojika Sudharman’s three-year-old son Sailojan had to be admitted to the hospital after he developed breathing problems.

It was the fifth time he’s had to stay overnight in a hospital, but the first time at Kingston. Never before had play specialists been on hand to make the experience better.

“I guess that he knows he’s not well but by having all these things that he enjoys, like he loves playing with bubbles and painting, it just gives him a distraction, so it just helps him not focus on what he’s going through,” she said.

“Obviously by having him calm that is going to help him as well because when he’s crying that makes his breathing worse.”

‘In his head, he goes there to play’

Susana Casanova’s six-year-old son Alfonso has leukaemia and receives chemotherapy as part of his treatment.

“It was during one of our stays in Kingston Hospital… that we became aware of the utmost importance of the play specialists in hospitals,” she said.

“They are so relevant for parents as they are able to distract us from our dramas and, for moments, also from the treatment.”

She added that Alfonso is “never upset when he has to go to hospital”.

“In his head, he goes there to play and to see the play specialists – his friends. His twin brother also wants to go.”

Johnson to tell MPs he is ‘taking responsibility’ for breaking the law, despite repeated denials that he did

‘Our lives have been saved’: UK approves visas for young female footballers from Afghanistan