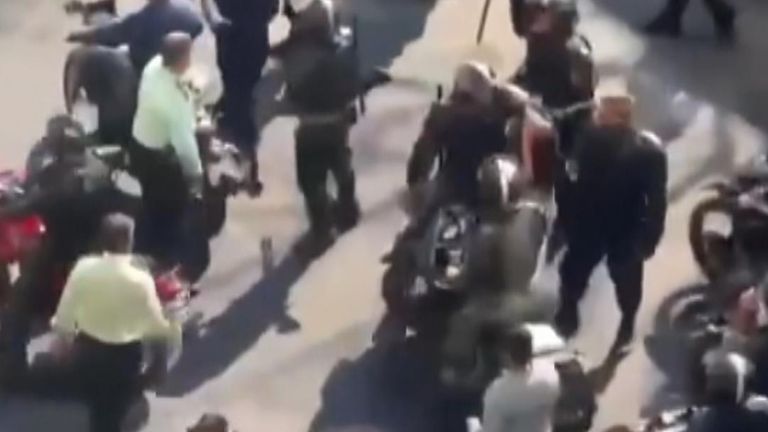 Human rights groups have warned of Iranian security forces’ escalating response to demonstrations in the western province of Kurdistan.

Clips from the regional capital Sanandaj appear to show security forces firing weapons in residential neighbourhoods and large groups of anti-riot police moving around the city.

The city was one of the first to see demonstrations following the death of 22-year-old Kurdish woman Mahsa Amini after she was in the hands of security forces.

With internet disruption reported across Iran and reports of local journalists being arrested for covering the demonstrations, information about the situation on the ground is scarce.

But footage from across the country is surfacing online. One widely-condemned video showed a police officer sexually assaulting a female protester while trying to arrest her in Tehran’s Argentina Square.

A voice in the video can be heard saying: “Oh they have arrested her, it is a girl. Please let her go. Why no one goes to her rescue?”

A new video has emerged online showing a police officer sexually assaulting a female protester while trying to arrest her in Tehran’s Argentina Square.

With reports of escalating tactics in Kurdistan province, Sky News has analysed footage emerging from the region’s capital.

More on Data And Forensics

This video was shared on Monday by Norway-based group Hengaw, which monitors human rights violations in Iran’s Kurdistan province. They say it was captured in Naysar, which is a northern suburb of Sanandaj.

Sky News has not been able to independently verify the video. Although reverse image searches of the video’s key frames confirm that the video is recent.

In it, at least six members of the Iranian security forces can be seen firing weapons in a residential neighbourhood.

The sound made when reloading indicates the weapons being fired are shotguns, according to analysts at the UK-based weapons research group, the Omega Research Foundation.

It’s difficult to make out the direction of fire, but Hengaw say that officers in the video were firing directly at homes.

The person recording the video says they were used to “suppress the people” and ends the video by saying “death to Khameini”.

According to analysts at the Omega Research Foundation, those casings on the left and in the centre are shotgun cartridges.

The metal canisters on the top right would have contained CS gas – also known as tear gas.

The Omega Research Foundation says that the disused cartridges in the videos are similar to others found in other cities in Iran.

“While each require further verification, all evidence in combination points to the use of live fire against protesters,” it said.

But human rights groups say this is all just the tip of the iceberg.

“We are entering a sensitive phase of the demonstrations and confrontations. The regime is using more and more force to repress the protests. And we’ve seen that in Sanandaj, Kurdistan but also in small towns in the region,” said Taimor Aliassi, United Nations representative for the Association of Human Rights in Kurdistan of Iran.

“They’re now using new arms against protesters that we haven’t seen before [in the protests]” he told Sky News.

Other videos reportedly from Sanandaj demonstrate chaotic scenes on the ground.

In this video, at least 14 motorbikes driven by members of the security forces drive through the city.

Many of the bikes are carrying two officers, with those on the back equipped with weaponry. Shots can be heard throughout the video, and protesters can be seen throwing rocks at the officers as they pass.

Hengaw say that it’s not unusual for officers to travel on motorbikes in Iran, but it’s rare to see so many together at one time.

Other footage shared by the group demonstrates the scale of the security force’s presence in the city.

This video, which they say was captured on Thursday, shows a convoy made up of at least 14 vehicles including cars, motorbikes and trucks carrying security forces.

Those visible appear to be wearing the uniform of Iran’s anti-riot police.

However, Hengaw warn that officers from the military Islamic Revolutionary Guard Corps (IRGC) have been reported as operating in the region wearing police and riot police uniforms in recent days.

It’s therefore difficult to discern exactly which units are part of the convoy depicted.

“All sorts of security forces, both plain cloth and uniform, have been transferred to Sanandaj,” he told Sky News.

“We see photos taken by residents showing security forces stationed every five metres on the street. It’s really quite a militarised situation.”

The Data and Forensics team is a multi-skilled unit dedicated to providing transparent journalism from Sky News. We gather, analyse and visualise data to tell data-driven stories. We combine traditional reporting skills with advanced analysis of satellite images, social media and other open source information. Through multimedia storytelling we aim to better explain the world while also showing how our journalism is done.