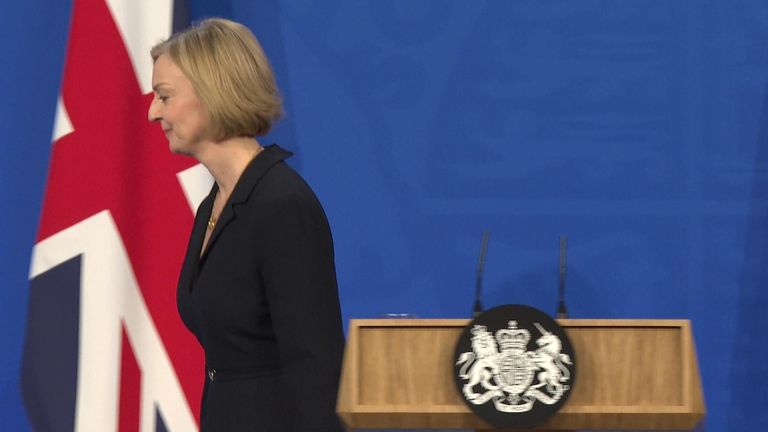 Be in absolutely no doubt, the prime minister is in deep trouble.

She has sacked her chancellor, committed a second major U-turn on her mini-budget, and junked the core of her economic policy.

And she did so, awkwardly and uncomfortably, in no more than eight minutes.

In an excruciating news conference – so short the gathered political press pack were left open-mouthed as she departed – Liz Truss made her already perilous political position even worse.

The aim of this breakneck change in direction was to attempt to calm markets and her Conservative colleagues, but instead, she left huge questions unanswered.

It’s worth underlining the significance of what the prime minister just announced.

First, on policy, she has buckled and reversed her position on corporation tax. She will now go ahead with the increase proposed by her leadership rival, Rishi Sunak.

During the contest to replace Boris Johnson as Tory leader, Ms Truss had said increasing the rate from 19% to 25% next April would “put off people who want to invest in Britain” and amount to “cutting off our nose to spite our face”.

It was a significant part of the platform on which she was elected Tory leader, now humiliatingly discarded in order to bring in around £18bn to fill the black hole left by last month’s mini-budget.

‘You’re out of your depth, prime minister?’

She said it was a “down payment” on the medium-term fiscal plan due to be set out on 31 October – a signal to the markets that she’s prepared to make more reversals if necessary.

Does she still believe it will put people off investing? We don’t know because she didn’t stick around at the news conference long enough to be asked.

On the sacking of Kwasi Kwarteng as chancellor, she expressed her sorrow – but again, did not answer the obvious question about how she can possibly justify his departure without her own.

The chancellor, who was supposed to be one of her closest political friends, was also humiliatingly discarded – along with the government’s radical economic mission for which she had asked him to lead the charge.

The way in which the prime minister delivered this news really matters. Not just because of the lack of scrutiny that came from only taking four questions and barely engaging with them in the answers – but because her party, and indeed the markets, will have been watching to see how she handled the situation.

That news conference was not just about communicating with the public. The messages I received from Conservative MPs ahead of the news conference made clear that she needed to put in a really strong, reassuring performance.

Their fears are that she is out of her depth. They want to see that she can handle being prime minister. And the early signs are that her performance today failed on both fronts.

One MP has messaged me saying it was “shockingly bad”, even by Liz Truss’s standards.

Jeremy Hunt’s installation as the new chancellor may be intended to show the ship is being steadied – that someone with deep experience in government is at the helm of the economy and that markets do not need to fear further surprises.

This prime minister looks out of her depth. “It’s not going to last,” is how one cabinet minister put it to me.

Cabinet meets in Downing Street to pay tribute to the Queen