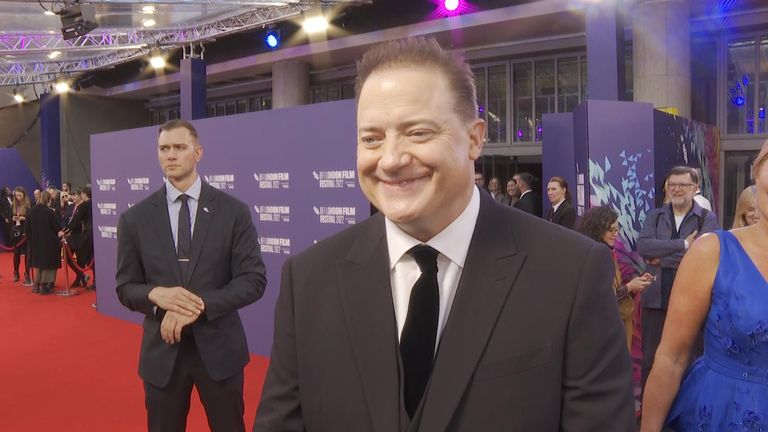 London Film Festival has returned in its full, in-person form this year, as celebs and filmmakers head back to the event to show off their latest projects to a British audience.

Backstage, the TV and film podcast from Sky News, has been at the British Film Institute’s flagship event on London’s South Bank, watching films and chatting to people involved in them.

Here are some of the highlights from this year’s festival, along with some of the stars who have spoken to Sky News in London.

Jessica Chastain in her new film The Good Nurse

This year’s best actress Oscar winner Jessica Chastain is back with her new project, which tells the true story of a nurse in the US hoping to find the truth about a string of mysterious deaths at a hospital.

Chastain plays Amy Loughran, a nurse who was working long hours to make ends meet, while also battling health issues of her own. She meets Charlie (Eddie Redmayne) while on her night shifts, who befriends her.

However, the finger gets pointed at Charlie after a string of unexplained deaths.

To prepare for the role, Chastain told Backstage it was “amazing to talk to” the real life Amy, “to learn about her… to understand what her life was like and what she had at stake, it really helped me to realise how courageous she was and what an incredible person she is.

“Being a single mother to two girls, not having health insurance, working on a night shift… you’re not really getting proper sleep and also at the same time needing a heart transplant – that’s what we walk in with at the beginning of this film and then realise, I mean, without giving any spoilers away, what she then stumbles into is quite shocking.”

Bill Nighy on his potential run for an Oscar

British acting royalty Bill Nighy stars as Mr Williams in Living, a drama about a lifelong bureaucrat who is diagnosed with a terminal illness.

He then decides he wants to start “living” a more exciting life.

The film is tipped for the big time, with critics particularly praising Nighy’s performance.

It’s a remake, almost shot for shot, of the 1952 Japanese film Ikiru, rewritten especially with Nighy in mind.

He said he jumped at the chance to make the movie, telling Backstage the whole project was “very, very attractive”, after speaking to Kazuo Ishiguro, the Nobel Prize winning novelist, who eventually agreed to write the script for the film, calling it a “marvellous development”.

He is the man of the moment, after starring in the latest A24 film The Whale, where he plays an extremely overweight man who is trying to reconnect with his estranged daughter.

While the film itself has mixed reviews, they do all agree on one thing – Fraser puts in a phenomenal performance.

The Mummy actor has been out of the limelight for some time, but is now back on red carpets, telling Backstage: “The biggest challenge wasn’t wearing the makeup or wardrobe so much as it was performing with an ensemble cast who were wonderful… and telling a story of tolerance all shot in a time of COVID.

“It’s a film about love at the end of the day.”

It’s the final festival for event chief Tricia Tuttle, after 10 years at the helm

Tuttle stands down after this event, but explained to Backstage some of her most memorable moments in her decade running the festival.

“The day we showed Whiplash and no one had heard of Damien Chazelle, and people just went crazy. And we sort of thought that he would get that kind of response, so we did a rare thing and brought him back at the end of the screening, and it was one of those moments.

“Another moment that was really special was when we had Lady Bird, and Greta Gerwig and Saoirse Ronan came back after. It was our surprise film, so no one knew what they were going to see, and they came back afterwards and had that kind of rapturous response as well. So those are really special, precious moments.”

Empire Of Light is set in the 1980s, with Colman starring as the manager of a grand cinema amid a crumbling seaside town, which has been taken over by the far-right.

The former best actress winner at the Oscars told Backstage that the film is based on Mendes’ mother, adding “it all came from a very personal experience – so we had the best person on set every day”.

“He would talk about watching his beloved mummy become powerful, become eloquent, become incredible, and then just tip over and then go into the decline,” she said.

“And he calls her heroic – so it was a hell of a journey to play. I did have an incredible sort of font of knowledge in front of me at all times.”

You can listen to all the interviews and news from this year’s London Film Festival in the latest Backstage podcast.