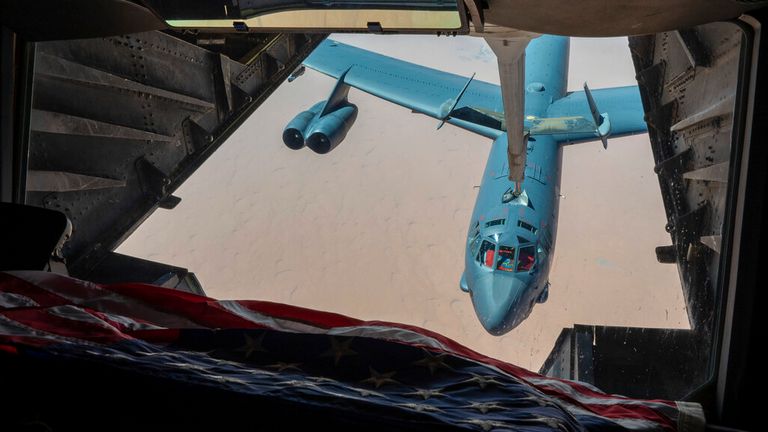 A NATO nuclear exercise with warplanes that can drop atomic bombs will take place from next week over the United Kingdom, the North Sea and Belgium, the alliance has said.

The annual training – called Steadfast Noon – is going ahead despite escalating tensions with Russia over fears President Vladimir Putin might consider a real nuclear strike in Ukraine.

Unusually, NATO chose to highlight well in advance the fact the exercise was coming up.

This appears to have been in a bid to ensure transparency and reduce the risk of any misunderstanding about the top secret and highly sensitive exercise.

Even the name, Steadfast Noon, was only formally declassified three or four years ago.

Air forces from some 14 countries are set to take part, with up to 60 aircraft operating over northwestern Europe, the alliance said on Friday.

They will include fighter jets from allied nations, such as Belgium and Germany, that can carry B61 bombs provided by the United States as well as US B52 bombers.

No live weapons will be used.

The jets will be escorted by other warplanes along with refuelling aircraft and spy planes.

The aim is to test the ability of allies to conduct nuclear strikes – the bedrock of NATO deterrence policy.

“Training flights will take place over Belgium… as well as over the North Sea and the United Kingdom,” NATO said in a statement.

The B-52 long-range bombers will fly from Minot Air Base in North Dakota.

Hosted this year by Belgium, the training will run from Monday until 30 October.

A different NATO country hosts the exercise each year. Last year it was Italy’s turn.

Everything related to the alliance’s nuclear policy, posture and activity is normally top secret.

Allies try to be incredibly careful about any comments on nuclear weapons because even that could be seen as escalatory.

Similarly, NATO does not spell out when it might use nuclear weapons, other than to say such circumstances would be “extremely remote”.

Drawing red lines could undermine the alliance’s ability to deter threats so it prefers to be deliberately ambiguous.

But France’s president appeared to break with this convention on Wednesday.

In a television interview, Emmanuel Macron said his country would not retaliate with a nuclear strike should Russia’s Vladimir Putin launch a nuclear weapon in Ukraine or in the region.

Russia has used the threat of a nuclear strike in Ukraine as part of its efforts to deter the West from supporting the Ukrainian military.

The Ukraine crisis appears to have prompted the alliance to be increasingly public about its annual nuclear exercise.

Jens Stoltenberg, the NATO Secretary General, said earlier in the week it would send a “very wrong signal” to cancel the long-planned event.

Read more:
What would the West do if Vladimir Putin does launch a nuclear attack?
British troops take part in extreme weather training with Sweden and Finland

Ben Wallace, the British defence secretary, echoed this view and noted that Russia’s nuclear forces are due to conduct their annual training exercise at around the same time.

“I think that is the key. What we don’t want is to do things out of routine,” he said on Thursday, speaking on the sidelines of a meeting of NATO defence ministers in Brussels.

Only three of NATO’s 30 allies have nuclear weapons – the US, the UK and France.

But France plays no direct role in NATO’s nuclear deterrence and is not part of the alliance’s nuclear planning group, which oversees all allied nuclear matters.