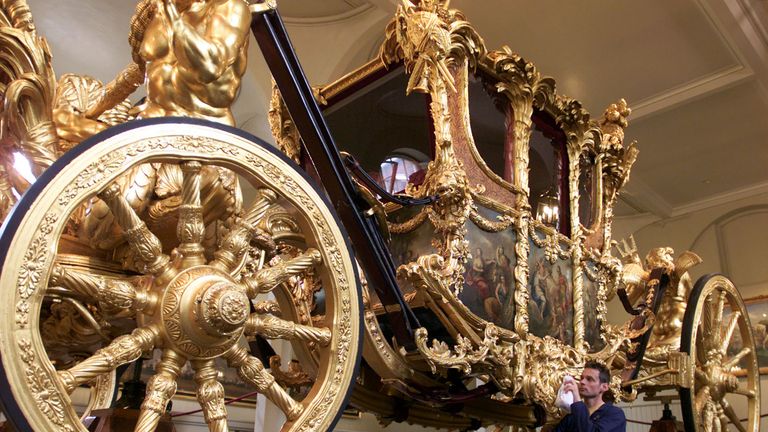 The coronation of King Charles III will take place on 6 May 2023.

Like his mother, the King will be crowned at Westminster Abbey, in the presence of faith leaders, peers, MPs, and foreign heads of state.

While official details of the day’s events are yet to be released, here Sky News looks at what we can expect in the ceremony conducted by the Archbishop of Canterbury.

What will happen on the day?

Timings for the latest coronation have not been revealed, but it is likely to be in the morning as well.

On the day, King Charles will travel from Buckingham Palace to Westminster Abbey with his Queen Consort, Camilla.

Like his mother and father, they are likely to be taken in the gold state coach, which is reserved for coronations and jubilees.

Up to a million people travelled to London to watch the coach along the Mall in 1953. 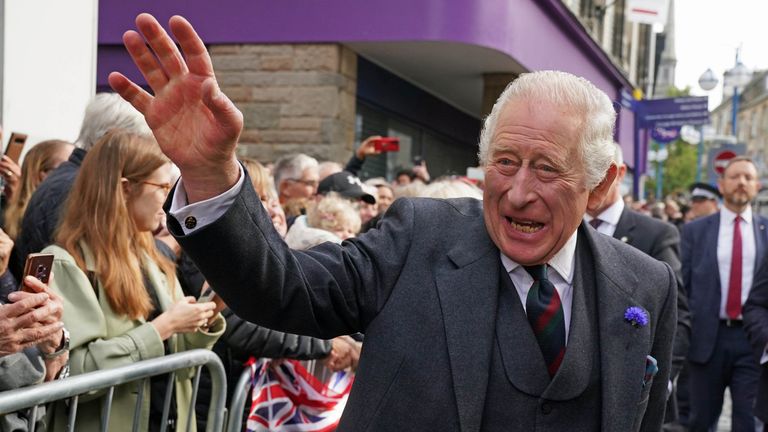 The ceremony will be broadcast live on television, but the number of guests who attend in person is expected to be cut from 8,000 to 2,000.

It is thought it will be shorter than the previous one – lasting just over an hour instead of three.

Peers will wear suits and formal dresses as opposed to ceremonial robes and many of the traditional rituals, including the presentation of gold ingots, will not feature this time.

In its statement, Buckingham Palace said: “The coronation will reflect the monarch’s role today and look towards the future, while being rooted in longstanding traditions and pageantry.”

Experts have speculated that the current cost of living crisis and the King’s desire for a slimmed down monarchy are behind the decision for a more muted ceremony.

Bob Morris, a senior research associate at University College London’s Constitution Unit, added: “We are led to believe that he’s very sensitive to the present economic situation for example.

“I think when you look at what the last coronation was, it was an enormous undertaking – 8,250 people were crammed into Westminster Abbey, some of the rows of seating reached 11 tiers high in the nave.

“And I think he must be sensitive to the view that in retrospect we can see the whole business of 1953 as the last imperial hurrah.”

After the ceremony, the King and Queen Consort are likely to appear on the balcony at Buckingham Palace, as the Queen and Prince Philip did in 1953.

There are six parts to the coronation – the recognition, oath, anointing, investiture, enthronement and homage.

The recognition sees the monarch stand in the theatre – the central part of the Abbey – and turn to the north, south, east and west to ‘show himself unto the people’.

Archbishop of Canterbury Justin Welby will then declare him the ‘undoubted King’.

This ritual dates back to Anglo-Saxon times.

Second is the coronation oath, which will see the King promise to reign according to law, exercise justice with mercy and maintain the Church of England.

He will then be presented with the Sword of State and declare at the altar: “The things which I have here before promised, I will perform, and keep. So help me God,” before kissing the Bible and signing the oath.

The third part – the anointing – follows, which is the process of blessing and consecrating the new monarch with holy oil – the central act of the religious ceremony. The King will remove his crimson robe and sit in King Edward’s Chair.

Fourthly, the investiture is the official crowning.

It will see the King dressed in special robes and presented with the orb, coronation ring, sceptre and rod.

Sitting in King Edward’s Chair, he will be crowned with St Edward’s Crown before the congregation shouts out ‘God Save the King’.

This is followed by the enthroning, which will see the monarch lifted onto a different throne by archbishops, bishops and “other peers of the kingdom”.

The final stage of the King’s coronation is known as homage.

It sees the Archbishop of Canterbury, the Prince of Wales and other royal blood princes paying tribute to the King by placing their hands between his and kissing his right hand.

Camilla to be crowned

The Queen Consort will then also be crowned.

Unlike the wives of Kings, the husbands of Queens do not become King Consorts and are therefore not crowned.

But ahead of her Platinum Jubilee, the Queen announced Camilla would be known as Queen Consort on King Charles’s accession.

Instead the Duke of Edinburgh ‘paid homage’ to Queen Elizabeth II immediately after the formal coronation – as Prince William and other princes are likely to do this time.

The Queen Mother was anointed and crowned during her husband’s coronation in 1937.

According to the Royal Family’s website: “A Queen consort is crowned with the King, in a similar but simpler ceremony.”

Will it be a bank holiday?

Coronations have traditionally fallen on weekdays, which have been declared bank holidays to allow the public to get involved by either watching on TV or crowding the streets in London.

King Charles’s coronation will fall on a Saturday. It is not yet known if the proceeding Friday or following Monday will be made a bank holiday.

It is taking place eight months after Charles officially became King – when his mother died and he was sworn in as monarch by a meeting of the Accession Council.

The gap between the Queen’s accession and her coronation was twice as long.

It had been rumoured King Charles would be crowned on the same date as his mother – 2 June.

The confirmed date, 6 May, is the same as the first-ever Silver Jubilee when King George V celebrated 25 years on the throne in 1935.

It is also the date the Queen’s sister, Princess Margaret, married her husband the Earl of Snowdon, Antony Armstrong-Jones.