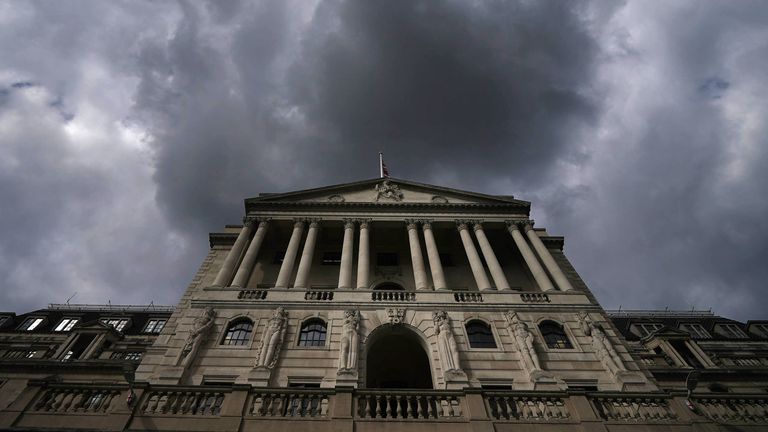 Therese Coffey has said Britons should “be assured” by the UK’s finances – as the Bank of England made its second intervention in the markets in two days.

The deputy prime minister and health secretary told Sky News the UK has “the second lowest debt to GDP ratio in the G7” and that the actions the government has taken in an attempt to stabilise the economy amid the energy crisis have already led to “an impact in the reduction of inflation forecasts”.

But as she spoke to Kay Burley, the Bank of England announced it would increase the amount of bonds it can buy in the final week of a scheme it launched in response to turbulence in the gilt market.

The Bank warned an ongoing rout in the gilts market poses a “material risk to UK financial stability”.

It is the second day in a row that the Bank has taken fresh action following a rise in UK government borrowing costs yesterday.

This morning, in line with its financial stability objective, the Bank announced it will widen its gilt purchase operations to include index-linked gilts.

Ms Coffey was not aware of the Bank of England’s fresh action but told Sky News that the country is in “a good state” and that MPs will be able to discuss the economy in more detail “in the days and weeks ahead”.

However, a leading think tank has warned that Chancellor Kwasi Kwarteng will have to find spending cuts of more than £60 billion if he is to meet his target to get the public finances back under control.

The Institute for Fiscal Studies (IFS) said it was not possible to deliver cuts on that scale through efficiency savings and “trimming the fat” and that it would require major cuts to public services.

It added that failure to come up with a credible plan that convinces the markets the government is committed to reducing debt could result in a worse crisis than 1976, when the Labour government was forced to seek a bailout from the International Monetary Fund (IMF).

Asked whether there would be enough fat to trim in governmental departments if needed, Ms Coffey said: “Well, I’m just not going to get into hypothetical.”

Is the UK facing a financial crisis?

On Monday, the chancellor announced that his debt-cutting plan will be published on 31 October – three weeks earlier than planned – alongside an independent economic forecast.

Both the publication of the medium-term financial plan and the forecast by the Office for Budget Responsibility (OBR) had been due on 23 November, but Mr Kwarteng has bowed to pressure to bring this date forward to Halloween.

Financial markets responded badly to the chancellor’s mini-budget last month, with the pound falling to a record low.

Mr Kwarteng has been facing growing calls to produce his fiscal statement which will outline how the government intends to pay for the £43bn worth of tax cuts in the mini-budget and how it plans to reduce debt.

Yesterday, the prime minister’s official spokesperson said the chancellor wants to set out his commitment to debt falling over the medium term “as soon as possible” and the new date “is the right time to do that”.

There will be more details about the government’s debt reduction plan announced ahead of then for the fiscal event, the spokesman added. Will the lights go out on Britain?

Ms Coffey denied that the chancellor brought his medium-term fiscal plan forward because the markets were spooked.

She said Mr Kwarteng’s decision to bring forward the date shows that he “wanted to get on and show our plans and make sure people have confidence that they can get on and start delivering them”.

Elsewhere this morning, official figures have shown that the UK’s unemployment rate dropped to its lowest for almost half a decade as more Britons left the labour market completely.

The Office for National Statistics (ONS) said the unemployment rate fell to 3.5% over the three months to August – the lowest since February 1974.

The ONS also said real wages had fallen by 4% for the period June to August, compared to the year before.

Responding to the data, the Trades Union Congress urged the government to “stabilise the economy and get pay rising”.

TUC general secretary Frances O’Grady said “pay packets continue to be eaten up by inflation” and that the government should be “lifting the minimum wage to £15 an hour as soon as possible” and “funding decent pay rises for all public sector workers”.

Meanwhile, Parliament returns today after party conference recess and Labour is calling on Mr Kwarteng to come before the Commons and turn his back on his tax-cutting mini-budget.

The chancellor is likely to be pressed on his fiscal plans at Treasury questions this afternoon.

Severance pay to ousted ministers could hit £726k this year – but who will be paid the most?