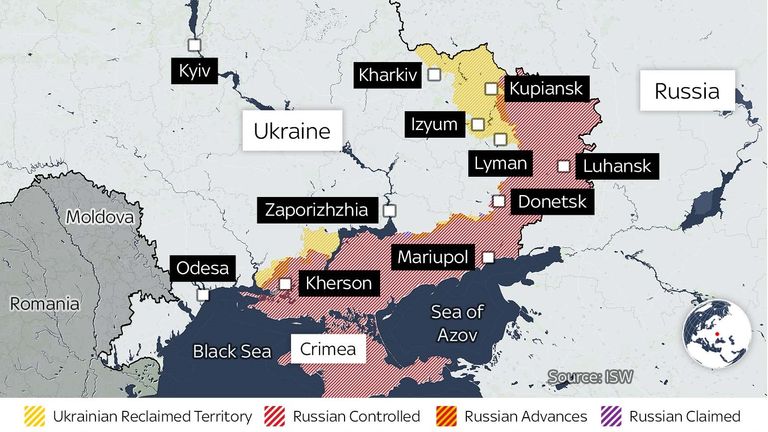 The hunger is sharp in Lyman but the instinct to survive, even sharper.

It’s been exceptionally honed in those Lyman residents who’ve remained through months of fighting, bombing and Russian occupation. And there are a surprisingly large number of them.

We see crowds on the outskirts of the town, gathering around a small warehouse where there is a rare handout of emergency supplies.

Now that the terrifying crashing sounds of battle are further away, many are emerging for the first time since the rapid pull-out of Russian troops about a week ago.

But life after liberation of this Donbas town is still an extraordinarily tough endurance test. There’s little food, no power, no running water, and no communications. They’ve been cut off from everything as the war raged around them, edging ever closer until it finally set up camp inside their town.

They only realised the fighting had moved on and control of the town had changed hands when the howling rumble of war faded.

So, word-of-mouth about donated bread immediately leads to long queues and there’s a barely contained desperation in the crowd as they each try to secure one of the boxes of aid being handed out.

“My legs are very tired. How do you think it is? I’ve been cooking on a fire for months now. Do you think that’s a good life?”

When another pensioner using two crutches is called ahead of her in the queue, she cries out bitterly again.

“You weren’t like that before,” she says accusingly to the old man, looking at his crutches suspiciously and eyeing his limp with disdain and doubt. Empty stomachs and sheer war weariness have ground down everything but some of the most basic impulses in some.

A loud and angry argument breaks out between a young mother-of-four and the elderly woman. It’s over who is in more need of the emergency supplies.

But Olga’s brought her young son with her, and she’s not about to lose this fight.

“I thought the war would bring us all together. But no, the war’s done the opposite. People are just looking after themselves and don’t help each other. Everyone’s on their own.”

In the end, both women are among those to receive aid. A kind of uneasy harmony is restored… for now.

Read more:
Bittersweet victory in Lyman as battle has come at a significant cost to civilians
Shocking number of Russian corpses a grim illustration of Ukrainian battlefield success 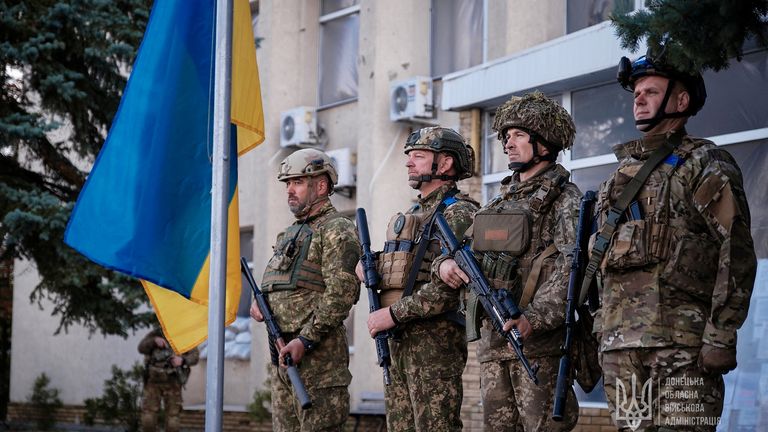 A town that’s finally giving up its secrets

The drift of the fighting as the Ukrainians press forward into the Donbas has meant the forests, the town of Lyman, and the surrounding areas are finally giving up their secrets.

The national police chief Ihor Klymenko, who’s in Lyman, says he’s called in experts including a United Nations team after police were directed to two possible mass graves with what appeared to be several hundred people buried together including babies and older children.

“We first questioned every civilian who remained in Lyman during the occupation and we discovered there’d been some burials,” he says.

“We checked out the sites and then started excavating. And on exhuming some bodies, we called the specialists in – investigators, forensics, and prosecutors – and after that, full exhumation began. Only after they’ve been examined, can we answer questions about how they died; when they died, and whether they’re civilians or military who’re in the mass graves.”

We see large tents and teams of investigators – some in hazmat suits – sifting through the graves to try to determine the facts but police ask us not to film the area or their work until they’ve been able to establish a few facts.

And there are still many Russian corpses being discovered in the wake of the Ukrainian advance. Those we spot in the woodland around Lyman and the nearby towns also now liberated by Ukrainian troops are already badly eaten by forest flies and rats. But they lie there, mostly untouched.

Some have been found with booby traps under them so the mine-clearance teams concentrate first on the roads and verges. The small mine-clearance group we’re with tell us they find about a hundred mines daily – including internationally banned cluster bombs disguised as leaves so as to go unnoticed and cause maximum damage.

The head of this anti-mining group is Anatolyy Krasnopyorov and he says: “We’re finding a lot of them in Donetsk – particularly the ‘leaves’. They’re forbidden under the Geneva Convention but they (the Russians) are still throwing them all around.”

He continues: “There are also lots of different anti-personnel mines too which are also forbidden by the Geneva Convention. They’re called black widows and they can blow off half your leg.”

‘Apartheid’ report over treatment of Palestinians dismissed by Israel as ‘preposterous’