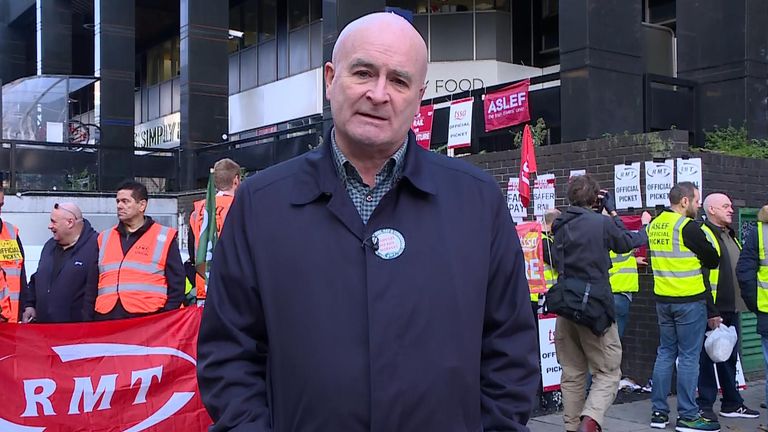 Rail passengers are in for more travel chaos as only around one in five trains are set to run today due to another strike.

More than 40,000 members of the Rail, Maritime and Transport (RMT) union at Network Rail and 15 train operating companies are staging a walkout over jobs, pay and conditions.

Around half of the network will be closed all day and trains will operate only between 7.30am and 6.30pm.

Passengers are being urged to “only travel by train if absolutely necessary on Saturday”.

Services will start later than normal on Sunday morning as workers return to duties.

Ahead of the strike General Secretary Mick Lynch wrote to Transport Secretary Anne Marie Trevelyan to urge her to “unshackle” the railway companies and allow them to reach a settlement with the rail unions.

Mr Lynch wrote: “I am writing following your comments at the Conservative Party Conference last weekend in which you said that there is a ‘deal to be done’ between the rail unions and train companies in relation to the ongoing industrial disputes.

“I am also hopeful that a negotiated settlement between the RMT and the employers can be reached.

“However, for this to be achieved, your government must unshackle the train operators who currently take their mandate directly from yourself.”

In a statement, the Department for Transport urged union bosses to work with their employers “not against them”.

“For the third time this week, and second weekend in a row we face disruption and disarray on our railways,” a spokesperson said.

“Weekend rail travel has been on the rise since the pandemic as people travel to support their favourite sports teams, meet loved ones or go to events. These plans are all now jeopardised and our economy is damaged as a result.

“Our railway is in desperate need of modernisation but all strikes will do is punish the very people unions claim to stand up for and push passengers further away.

“We urge union bosses to reconsider this divisive action and instead work with their employers, not against them, to agree a new way forward.”

It follows the latest strikes last Saturday and Wednesday.

Passengers have been advised to check National Rail Enquiries or their train operator’s website for updates.

People with a ticket for Saturday whose journey is cancelled or rescheduled are entitled to a refund, or they can travel on another day up to and including Tuesday 11 October.

Season ticket holders are entitled to compensation through the delay repay scheme.

Sam Bankman-Fried has been arrested following FTX collapse. Here’s what happens next

NREL Announces Plans To Collaborate With Georgia Institute of Technology