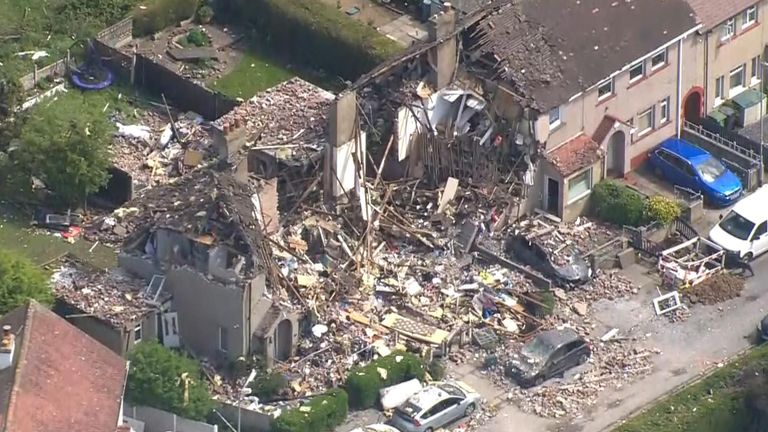 A man described as a “neighbour from hell” has been jailed for causing a gas explosion that killed a two-year-old boy.

George Hinds died after his next-door neighbour Darren Greenham, 45, cut the gas pipes at his council house in Heysham, Lancashire in the hope of selling the copper piping for scrap, Preston Crown Court heard.

He used an angle grinder and was under the influence of alcohol and drugs, the court was told.

On Wednesday he was sentenced to 15 years in prison for manslaughter, damaging a gas meter and theft of gas after pleading guilty in August.

The blast, which happened at 2.36am on 16 May last year, destroyed Greenham’s property and damaged 55 others.

Arthur’s father Stephen Hinds clutched a Paw Patrol toy in memory of his son as he watched the sentencing from the public gallery.

George’s mother Vicki Studholme, who had previously described Greenham as the “neighbour from hell”, was beside him along with several of their neighbours.

Mr Hinds said: “By Darren Greenham cutting a gas pipe to make a few quid I have lost my son, my absolute world.”

Arthur’s mother added: “After the explosion, being trapped in the rubble was the most scared I had ever been in my life.

“This was until I arrived at the hospital to be told that George had died.

“Never ever have I felt so scared as in that moment of my life.”

The family has been living in a caravan since the explosion and were praised by Judge Robert Altham for their dignity.

Concluding the case, he said: “Mr Greenham was a selfish and disruptive neighbour.

“He lived his life without regard for the comfort of those who were unfortunate enough to live adjacent to him.”

The prosecution had said Greenham was facing eviction proceedings and was hoping to make money on the pipes he cut.

He was dependent on alcohol and drugs and would regularly play loud music and taunt all three members of the family, the court was told.

After suffering a serious head injury in the explosion, he lost most use of his right hand.

His one-month sentences for theft of gas and damage of a gas meter will run concurrently.