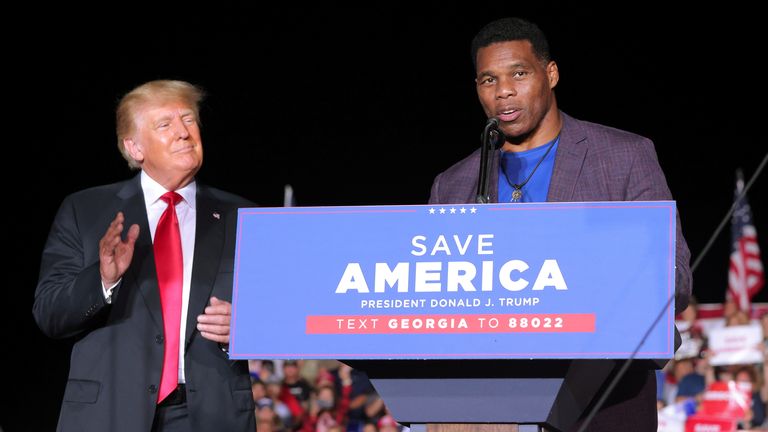 Herschel Walker, a Trump-endorsed Republican nominee for the US Senate in Georgia who has opposed abortion rights, has denied a report claiming he paid for an abortion for a former girlfriend in 2009.

The Daily Beast published claims from a woman who said the former NFL star paid for her abortion when they were dating.

She said Mr Walker encouraged her to end the pregnancy, saying that the time wasn’t right for a baby, the news outlet reported.

The woman, who was not named, claimed her allegations were supported by a receipt showing her $575 payment for the procedure, along with a get-well card from Mr Walker.

The Daily Beast reported her bank deposit records showed the image of a $700 personal cheque from Mr Walker dated five days after the abortion receipt.

Mr Walker, 60, rejected the claims as a “flat-out lie” and a “repugnant hatchet job”.

In a statement posted on Twitter, he said he would file a lawsuit against the news outlet on Tuesday morning.

‘I never paid for an abortion’

“This is a flat-out lie – and I deny this in the strongest terms possible,” he wrote.

“I can tell you right now, I never asked anyone to get an abortion. I never paid for an abortion,” he told host Sean Hannity.

Asked about the cheque, Mr Walker said: “Well, I send money to a lot of people. I give money to people all the time, because I’m always helping people, because I believe in being generous.”

The allegation against him is the latest in a series of reports about the football legend’s past that has rocked the first-time candidate’s campaign.

Earlier this year, he acknowledged reports that he had three children he had not previously talked about publicly.

Walker himself has at times discussed his long struggle with mental illness.

As a Senate hopeful, Mr Walker has supported a national ban on abortions with no exceptions for cases involving rape, incest, or a woman’s health being at risk.

“I’m for life,” Walker has said repeatedly, and when asked about whether he would allow for any exceptions, he has said there are “no excuses” for the procedure.

The former University of Georgia running back is pitted against incumbent Democratic Senator Raphael Warnock, who supports abortion rights.

Walker has often characterised abortion as “a woman killing her baby” and has said he doesn’t understand how Mr Warnock, a Baptist pastor, can support the procedure being legal.

Asked whether the latest allegations might affect the outcome in Georgia, Mr Warnock replied: “I’ll let the pundits decide.”

One dead and dozens hurt as tornadoes strike Texas and Oklahoma

Samuel Bateman: Polygamous ‘prophet’ had more than 20 wives, many of them underage, says FBI