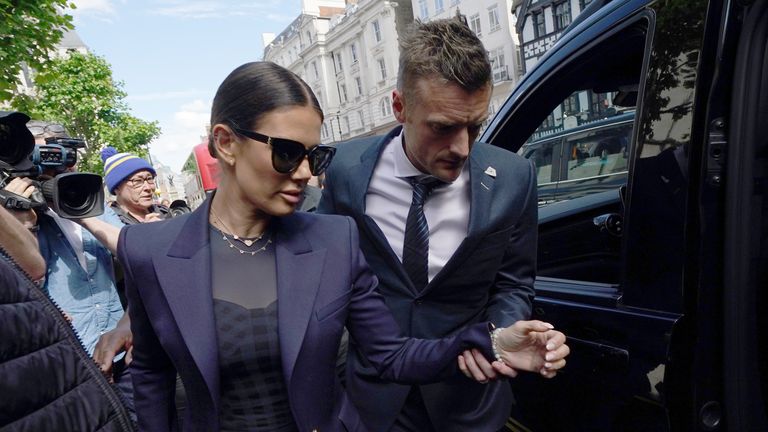 In a ruling issued on Tuesday, Judge Justice Steyn said Vardy must pay 90% of Rooney’s costs, and that an £800,000 down payment must be paid by 4pm on 15 November.

In the case dubbed “war of the wags”, Rooney incurred eyewatering costs of more than £2 million. However, £350,000 of those costs had already been racked up ahead of the trial, so were removed to produce a final figure of £1,667,860.

The final costs ruling will be confirmed once Rooney submits her final total costs bill.

Although the exact figure of Vardy’s own costs is not known, it’s likely to be a similar amount to Rooney’s, stretching into the millions.

Vardy lost her libel case against Rooney in July.

The case centred around a social media post published by Rooney on 9 October 2019, in which she accused Vardy of leaking stories about her to the press.

The post led to Rooney being dubbed “Wagatha Christie” on social media – a nod to the world-famous British crime novelist Agatha Christie.

Vardy, who had denied being responsible for leaking Rooney’s personal information, announced she would be taking Rooney to court in June 2020, with the trial finally reaching the High Court in May this year.

However, the case didn’t go Vardy’s way, with the court finding the essence of Rooney’s social media post was “substantially true” – that’s to say Vardy was responsible for leaking Rooney’s private information to the press.

In the order made public on Tuesday, the same judge said Vardy had “deliberately deleted or destroyed evidence”, calling such behaviour “outside the ordinary and reasonable conduct of proceedings”.

For this reason she said costs would be assessed on an indemnity rather than a standard basis – which is the highest basis a court can offer, and more favourable to Rooney in terms of the amount of her legal bill she can recover.

During the week-long trial there was “a series of unfortunate incidents” involving a broken laptop, forgotten passwords and lost data when a mobile phone belonging to Vardy’s agent was dropped overboard and ended up at the bottom of the North Sea.

This led Rooney’s team to accuse Vardy of conducting a “deliberate and calculated” campaign to destroy evidence.

The judge justified her decision to reduce Vardy’s costs bill by 10%, citing Rooney’s “weak” allegation that Vardy was one of the people behind The Sun’s Secret Wag gossip column, and Rooney’s unsuccessful public interest defence.

Rooney had defended the claim on the basis it was true and in the public interest for her to publish it, but was only successful in persuading the court on the first count.

The three fake stories Rooney had accused Vardy of sharing with The Sun newspaper featured her travelling to Mexico for a gender selection procedure, her return to TV, and the basement flooding in her new home.

Oscar nominations 2023: The full list of films and stars up for Academy Awards