Police wrongly used tear gas inside the soccer stadium where at least 125 people died in a stampede in Indonesia over the weekend, an official has revealed.

Chaos erupted at the Kanjuruhan stadium in Malang, East Java, when fans of Arema FC began rioting and invading the pitch after their team lost.

Hundreds of spectators were crushed as they tried to flee the overcrowded stadium after police fired tear gas into the ground, causing a stampede leading to one of the worst stadium disasters in history.

Indonesia’s soccer federation (PSSI) said the club’s security officer and the head of its organising committee would be banned from the sport for life and fined the club 250 million rupiah (£14,424).

“There were many weaknesses from the organising committee,” Erwin Tobing, head of the association’s disciplinary committee, said.

The PSSI also confirmed officials from the world football governing body FIFA and the Asian Football Confederation are set to visit the country, while UEFA announced a moment of silence would be held at all European fixtures this week.

There were no orders to use tear gas on the crowd, said Albertus Wahyurudhanto, an official with the National Police Commission, an oversight body that reports to the country’s president.

“Tear gas was supposed to be (fired) outside…there are suspicions of a violation of instructions,” he told reporters, adding the Commission will share its findings with a fact-finding team set up by the government.

At least 125 killed in Indonesia

The use of “crowd control gas” and weapons at matches is banned by Fifa.

Fans of the winning team, Persebaya Surabaya, had been banned from attending the game for fear of clashes, so most of the victims, which included 33 children, were the home club Arema’s supporters.

There is still some uncertainty about the death toll with police putting it at 125 died, while the Malang city health department says 131 lost their lives.

While the stadium in Malang has several exit gates, police have now said the gates could only accommodate two at a time. Spectators have also claimed some were locked, all of which contributed to the fatal crush.

Medics have said victims mainly appear to have died of suffocation and head injuries.

Mr Wahyurudhanto said it was unclear why some exits had been locked. 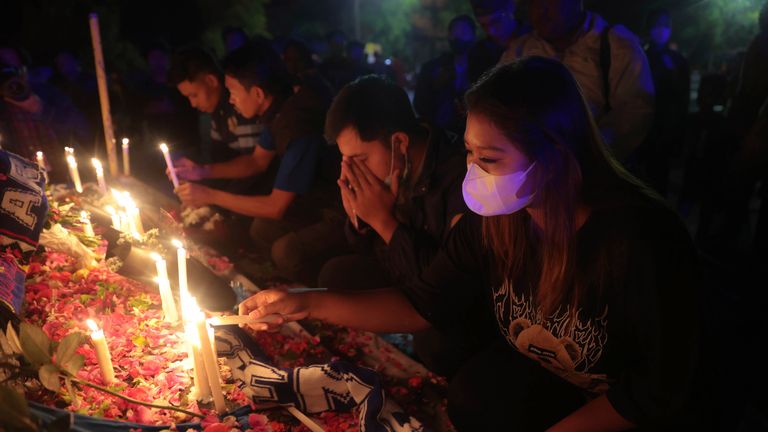 Hooliganism is not unusual at Indonesian football matches, meaning police are frequently heavy-handed when dealing with supporters.

Choirul Anam from Indonesia’s human rights body, Komnas HAM, said that if tear gas hadn’t been fired “maybe there wouldn’t have been chaos”.

Dozens of police officers have been placed under investigation and at least nine have been suspended, a police spokesperson said on Monday.

Norway bow and arrow killings suspect had been flagged for radicalisation, police say