The number of children who died in a stampede at a football match in Indonesia has risen to 32.

At least 125 people were killed in the crush on Saturday following the game between Arema FC and Persebaya Surabaya in the city of Malang.

Families and friends of some of the dead have begun mourning the victims as their bodies were returned home.

Only fans of the home side, Arema FC, were allowed to attend the match after organisers banned visiting supporters due to Indonesia’s history of football-related violence.

President Joko Widodo has ordered an investigation of security procedures, and the president of world governing body FIFA, Gianni Infantino, called the deaths “a dark day for all involved in football and a tragedy beyond comprehension”.

Police said 323 people were injured in the crush, some of whom are still in a critical condition.

Witnesses described fans flooding the pitch after Arema lost 3-2 to Persebaya, ending 23 years of being undefeated at home against their rivals.

Some of the 42,000 Arema fans flung bottles and other missiles at players and officials and at least five police vehicles were toppled and set alight outside the stadium.

Riot police trying to stop the violence fired tear gas in the stadium, triggering panic in the crowd and sparking the crush as they stampeded for the exits.

Most of the 125 people who died were trampled or suffocated.

Police chief Listyo Sigit Prabowo said in a news conference: “I ensure that investigation on this case will be conducted thoroughly and seriously.”

President Widodo has ordered a suspension of the Indonesian premier league until safety is re-evaluated and security is tightened.

The nation’s football association has also banned Arema from hosting any matches for the rest of the season.

Human rights group Amnesty International has urged the Indonesian government to investigate the use of tear gas at the stadium and ensure that those found in violation are tried in open court.

Police are still questioning witnesses and analysing footage from 32 security cameras inside and outside the stadium and nine mobile phones owned by the victims, as part of the investigation to identify suspects.

The 18 officers responsible for firing tear gas as well as security managers are also under investigation. 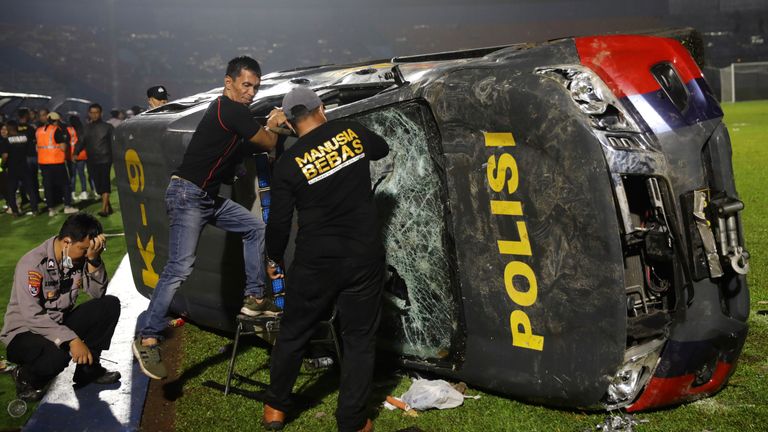 ‘A tragedy beyond comprehension’

FIFA, which has no control over domestic games, has previously advised against using tear gas at stadiums.

Hooliganism is rife in Indonesian football, with fanaticism often spilling over into violence.

Prior to the stampede on Saturday, 78 people have died in game-related incidents over the past 28 years, according to data from Indonesian watchdog Save Our Soccer.

World Cup: The Iranian football stars speaking out in solidarity with protesters back home

‘Russians must die after Bucha’: Volunteers head to the front line in Ukraine