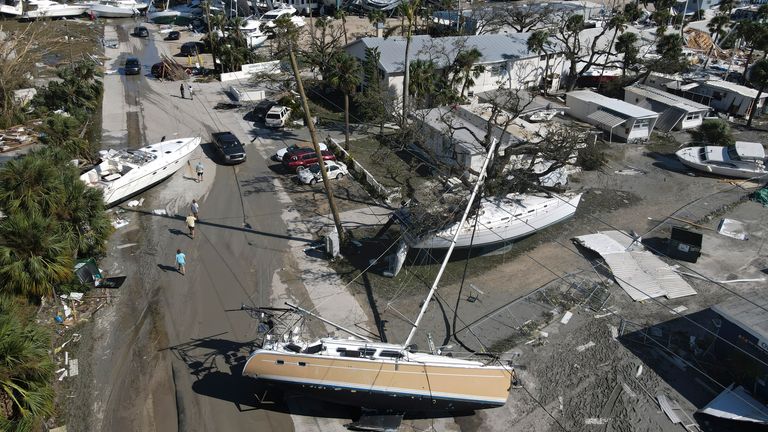 Hurricane Ian is gaining strength and veering towards the Carolinas – with uncertainty over how many fatalities the storm has caused in Florida.

This is one of the strongest-ever storms to hit the US – and emergency crews are trying to reach stranded Floridians after Ian cut a path of destruction across the state.

Over 2.6 million power outages have been reported, with officials warning of treacherous floodwaters.

There was virtually no mobile phone service in some areas, and internet connectivity was also affected.

Florida’s devastation seen from above

Florida Governor Ron DeSantis stopped short of confirming how many people have been killed, but said: “We fully expect to have mortality from this hurricane.”

And President Joe Biden said: “The numbers are still unclear, but we’re hearing early reports of what may be substantial loss of life.”

At least nine people have died following Hurricane Ian’s vicious lashing throughout Florida, according to an NBC News tally – although some other organisations place the number higher.

Two of the fatalities occurred in Sarasota, according to the county’s sheriff’s department. One person was confirmed dead in Volusia County and six more in Charlotte County.

Identifications have not been released and the state of Florida has refused to officially comment on fatalities. 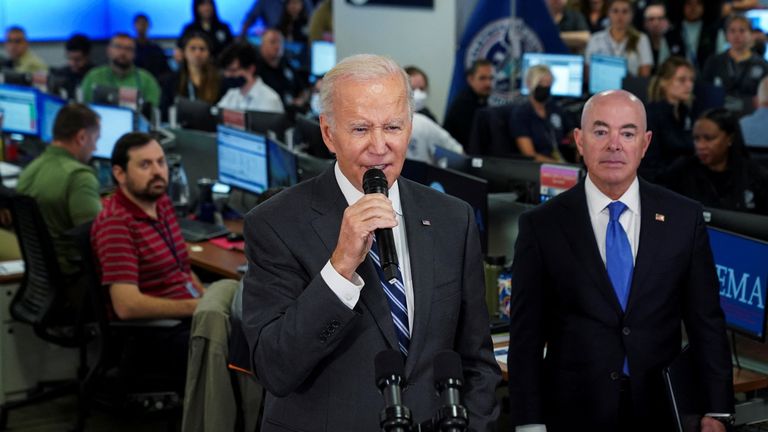 Biden: Storm could be ‘deadliest in Florida’s history’

According to NBC News, at least 12 deaths have been linked to Hurricane Ian in Florida so far.

A 72-year-old man died after he went outside during the storm to drain his pool.

The sheriff of one of the hardest-hit areas – Lee County – told US media that deaths could be “in the hundreds” and that he had received thousands of 911 calls.

“It crushed us,” Sheriff Carmine Marceno said. “We still cannot access many of the people that are in need.”

There are fears that many in the hardest-hit areas were unable to call for help because of the outages to power and mobile phone networks.

Eyewitness: No one expected this storm to be so vicious

It’s not over yet – where is Ian heading next?

Ian is now back in the Atlantic Ocean, but is expected to make landfall again at 2pm local time (7pm UK time) later today as a category one hurricane.

Forecasts suggest it will bring life-threatening flooding, storm surge, strong winds and potentially landslides and tornadoes to Georgia as well as North and South Carolina.

A hurricane warning is in effect for hundreds of miles of coastline.

In South Carolina, the city of Charleston is particularly at risk. A report commissioned by local officials suggests 90% of all residential properties are vulnerable to storm surge flooding.

Read more:
Residents describe escaping the eye of the storm
Dramatic before and after images show scale of destruction

Mr DeSantis called the damage in Florida “historic” – and disaster officials believe thousands could be displaced in the long term.

Walt Disney World and other tourist attractions in central Florida appeared to have avoided severe damage from Ian, but many businesses on the state’s southwestern coast – also a tourist hotspot – were destroyed and face a long rebuilding process.

Mr Biden has declared a major disaster, releasing federal funds to pay for measures such as temporary housing for those displaced.

Ian was a category four storm with winds up to 150mph when it struck southwest Florida on Wednesday, making it the joint fifth-strongest hurricane to hit the US.

At least 700 confirmed rescues have taken place across the state, with first responders going from door to door in Ian’s aftermath.

Locals are being urged to take care when using chainsaws and ladders – with emergency officials warning the number of “indirect deaths” during the clean-up could exceed fatalities caused by the hurricane itself.

Most schools in Florida are expected to reopen today or on Monday, and flights from Orlando Airport are set to resume in the coming hours. 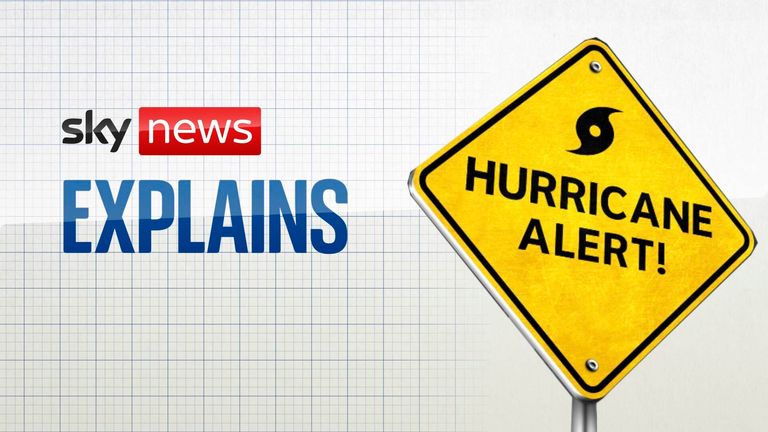 A warmer atmosphere can contain more water vapour. Researcher Michael Wehner of Lawrence Berkeley National Laboratory said: “Climate change didn’t cause the storm, but it did cause it to be wetter.”

MIT atmospheric scientist Kerry Emanuel added: “This business about very, very heavy rain is something we’ve expected to see because of climate change.

War ‘will be over by end of year’, as Ukraine intel chief says Putin coup already under way