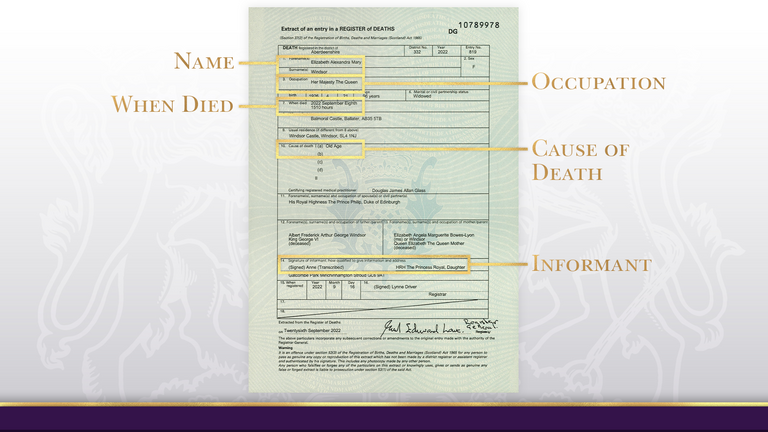 An extract of the Queen’s death certificate has been released which shows she died of old age.

The Queen’s daughter Princess Anne is named as the “informant” on the document and would have notified the local registrar of her mother’s death.

When paying tribute to her mother, Princess Anne revealed she was with the head of state in her last moments.

Anne, who accompanied her mother’s coffin as it travelled from Balmoral to London, via Edinburgh, said: “I was fortunate to share the last 24 hours of my dearest mother’s life.”

Read more:
The Queen through the years – a life of service in pictures
What was the Queen doing when you were born?
Six moments that defined the Queen’s reign

What does the Queen’s death certificate tell us?

The Queen’s full name is given as Elizabeth Alexandra Mary Windsor, while her occupation is listed as Her Majesty The Queen.

Her usual residence is noted as Windsor Castle.

Beneath her cause of death, the medical practitioner is recorded as Douglas James Allan Glass.

Queen Elizabeth was laid to rest after a state funeral on 19 September having served as head of state for 70 years.

Around 100 presidents and heads of government from around the world were among the 2,000 mourners at Westminster Abbey.

Meanwhile, hundreds of thousands of people descended on London to pay their respects on the day of the service.

The Queen was finally laid to rest in the King George VI Memorial Chapel in St George’s Chapel at Windsor Castle.

King leads his siblings in vigil beside Queen’s coffin

Kinship carers make big sacrifices. Some struggle to afford to look after the children they love