That’s the claim made by former England rugby union star Mike Tindall, who is married to the late monarch‘s eldest granddaughter Zara Tindall.

Before her state funeral on 19 September, Elizabeth II’s coffin was flown from Edinburgh Airport to RAF Northolt in west London on a RAF Globemaster C-17 aircraft, accompanied by the Princess Royal.

Mr Tindall described how the Queen’s original plane selection was substituted for the larger RAF aircraft to enable a more “dignified” ceremony.

He said: “It wasn’t the original plane picked and they had to change it and they went for this big old plane to make it more dignified.”

Mr Tindall said he could not verify the story, sent to him by an “ex-army friend”.

And it appears the claims have been shared on social media after apparently being written by Pete Bond who says he was tasked, when a staff officer in 2009, with reviewing plans for the movement of the Queen’s coffin if she died overseas.

Mr Bond reportedly wrote that a BAE 146 business jet was due to transport the Queen, but access to its freight bay was difficult and it was substituted for the bigger C-17.

He added: “And that in itself just sort of sums it up.” 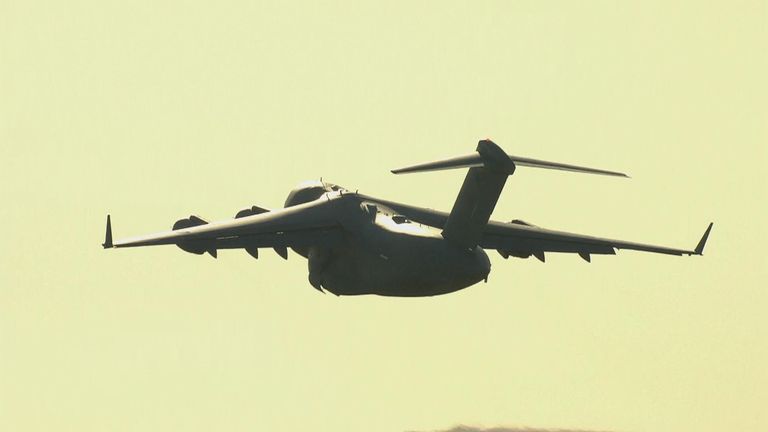 A senior RAF source said: “Extensive and comprehensive planning was conducted by the military for the demise of Her Majesty the Queen. The most appropriate assets were used throughout the operation.”

Mr Tindall told the story during The Good, The Bad & The Rugby podcast which he co-hosts.

When asked about the experience of the last few weeks, he replied: “It’s been sad, emotional but happy.”

Read more:
The Queen through the years – a life of service in pictures
Six moments that defined the Queen’s reign
The Queen’s most memorable quotes

Asked to comment on the Queen’s death and her funeral, he replied: “In some ways amazing, in other ways to see the family come so close together – overnight.

“You never predict it, obviously (with) a 96-year-old lady, you know at some point it’s going to happen but you’re never ready for when it does.”

He added: “I’m not a direct family member in terms of blood but watching what my wife Zara had to go through, obviously she loved the Queen beyond everything else.”

The Rugby World Cup winner also spoke about his regrets, saying he wished he had quizzed the Queen about the history she had witnessed.

He said he had “loads of regrets about not asking her so many more things. Having nervousness when you have that lucky seat of being sat next to her”.

‘Please help’: British man appeals for UK visa rules to be relaxed to save family trapped in Ukraine

‘Deeply worrying’: Missing girl, 15, believed to have been abducted in Bristol

Boy who lured friend, 12, to woodland, stabbed him more than 70 times and tried to decapitate him is jailed for murder