Labour’s shadow chancellor Rachel Reeves has said the UK government is putting the economy in danger and attacked Prime Minister Liz Truss’s plan of “trickle-down economics” after the pound sank to a record low against the dollar.

Sterling slipped to a low of $1.0327 on Monday, before stabilising at around $1.07, following lows seen after Chancellor Kwasi Kwarteng unveiled his £45bn tax-slashing package in the mini-budget on Friday.

She described “trickle-down economics” as an idea that “has been tried, has been tested and has failed”, during a speech at Labour’s conference in Liverpool.

“We are facing a national emergency,” she said. “Energy prices up, the cost of the weekly food shop up, people’s wages not keeping up.

“On Friday, the chancellor had an opportunity to set out a serious response to the cost of living crisis. And he failed.”

Ms Reeves promised a new deal for working people, with strengthened rights, saying “minimum wage will be set at a level that reflects the real cost of living”.

‘Those at the top will pay their fair share’

The shadow chancellor said the new vacancies – which include 5,000 new health visitors – will be funded by bringing back the 45p income tax rate cut introduced by the government last week.

She said: “I can tell you, those at the top will pay their fair share.”

The party said that by reversing the cut, they can fund “one of the biggest expansions of the NHS workforce in history”.

Ms Reeves also pledged to create a National Economic Council to bring together unions and industry to help make decisions on business.

She said she will scrap business rates and reform how businesses pay taxes so they “get valuation discounts straight away rather than waiting for years for their money back”.

She also touched on Brexit, saying any government that is “remotely serious” has “got to make Brexit work”.

‘Time for a government on your side’

The shadow chancellor described the Conservative Party’s record as “12 years of failure”, adding: “It’s time for a government that is on your side, and that government is a Labour government.”

She finished by listing Labour’s priorities, which she said are strong public services, a greener, fairer Britain, and hope and opportunity.

She said: “The prime minister is content to let energy giants pocket the cash and leave your children and your grandchildren to pick up the tab.

Read More:
Labour pledge to ‘build British industry’ through state-owned investment fund
The gloom of Labour’s recent past is lifting – and conference feels it

“Under these Tories, those with the broadest shoulders carry the lightest load. And not by accident, but by choice.

“It is time for a government that is on your side.

“Be in no doubt, that government is on your way.” 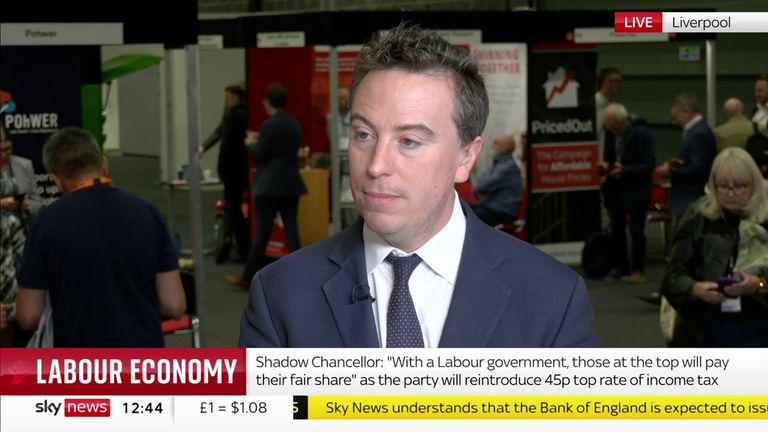 This is a party with its confidence back

He said it also showed that this is a party “that has its confidence back”.

Earlier, Ms Reeves told Sky News she was more optimistic about the party’s future than she has ever been in her 12.5 years as an MP.

Labour leader Sir Keir Starmer is due to deliver a speech at the conference tomorrow, when he will face major pressure to successfully pitch himself as a prime minister in waiting.

Last night, a new poll found the party is on course for a comfortable 56-seat majority at the next election, regaining many of the red-wall seats it lost in 2019.

People guilty of racist abuse of footballers online will be banned from matches, PM says

Autumn statement: Key announcements from chancellor at a glance