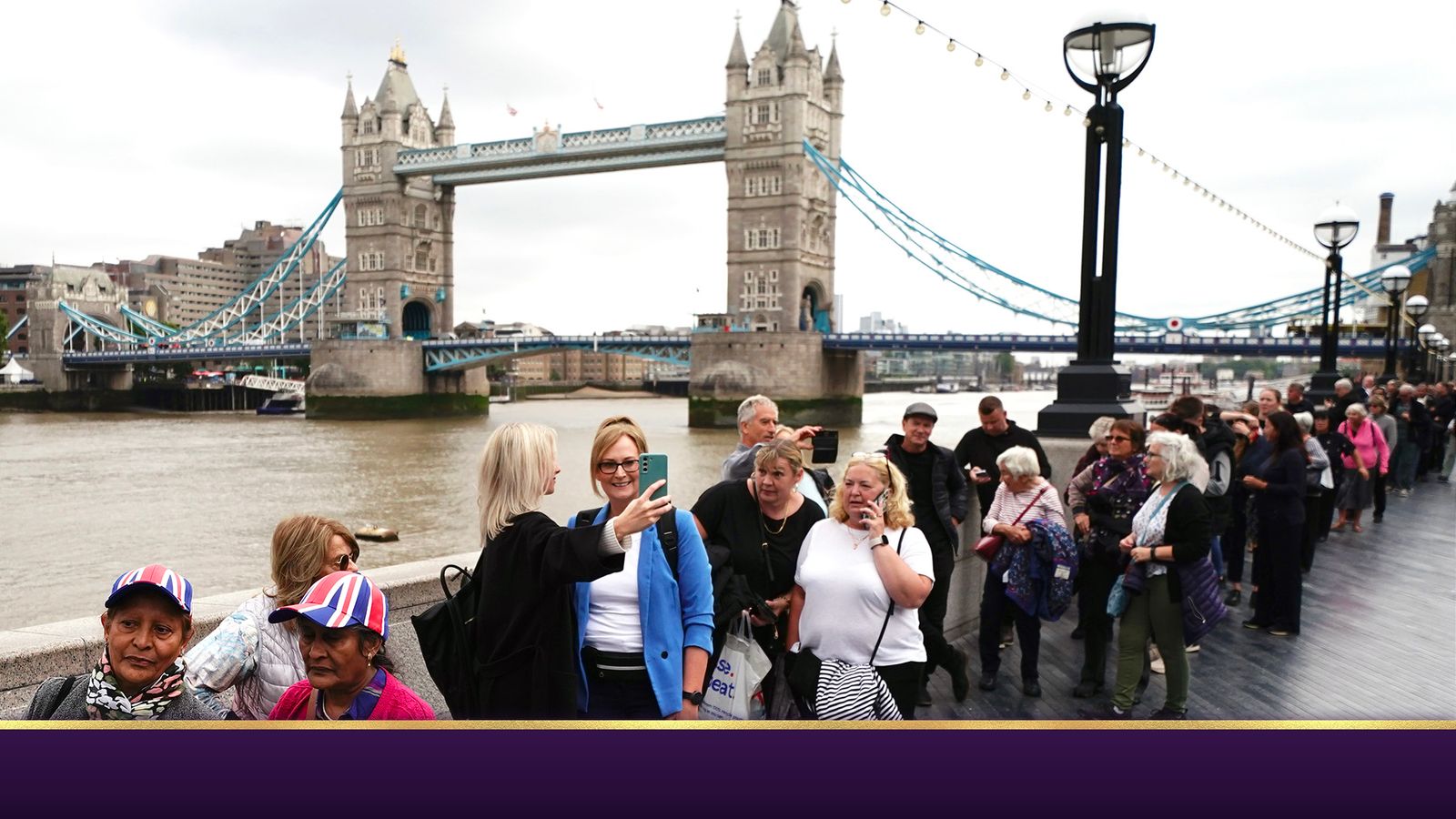 The queue to see the Queen’s coffin is now nearly four miles long and stretches from Westminster Hall past Tower Bridge – and continues to grow.

Ten of thousands of mourners have joined the wait to file past the monarch’s coffin as she lies in state.

People have been filing past the coffin since Wednesday afternoon, many wiping their eyes with tissues as they bowed or curtsied.

Former prime minister Theresa May and her husband Philip also paid their respects this morning.

Watch live stream of the Queen lying in state

Andrew Halas, who has queued since 6am, said it had been “a marvellous experience”.

The 70-year-old told the PA news agency: “I’m not really a royalist, but I felt I had to come and pay my respects to a really good person.”

He added: “I haven’t seen the Queen or been with the Queen in any shape or form, but I just feel that somehow, indelibly, she has made a connection with people of my generation.

“It’s kind of like closure, because she’s, I think, an incredible human being. The whole world knows about the Queen.”

Amy Harris described the atmosphere in Westminster Hall as “breathtaking”.

The 34-year-old, who travelled to London from Birmingham to join the queue, said: “When you’re able to go in and have a moment to look at it and reflect…

“The serenity of it – to be able to pay your respects in such a serene place, it’s very peaceful.”

James Cross, 65, said: “It’s just like the only person that’s there is you.

“You walk in and you could hear a pin drop.”

The Queen’s coffin is raised on a catafalque and draped with a Royal Standard while it lies in Westminster Hall.

It is guarded around the clock by units from the Sovereign’s Bodyguard, the Household Division or Yeoman Warders of the Tower of London.

One of the guards collapsed overnight and nearby officials were seen quickly rushing to his aid after he appeared to faint.

Read more on the Queen:
Seven things to look out for as the Queen lies in state

People queued overnight in central London to see the Queen lying in state.

The queue, which begins on Albert Embankment next to Lambeth Bridge before snaking down the River Thames, is being managed by Metropolitan police officers, volunteers and stewards.

People waiting in line have been given a coloured and numbered wristband.

The Queen’s coffin will remain on display for four days until 6.30am on Monday – the day of her funeral.

Why the airline climate change, sustainable jet fuel plan is trailing autos and EVs
Huck Cycles Overland is a US-made Mad Max-style electric moped proving popular in big cities
Whether it’s marketplace misogyny or unconscious collusion, female artists are losing out
Elon Musk has more than 20 direct reports at Tesla — here are the ones we know about
Putin calls up 300,000 reserve troops to Ukraine – as he warns West over Russia’s nuclear weapons