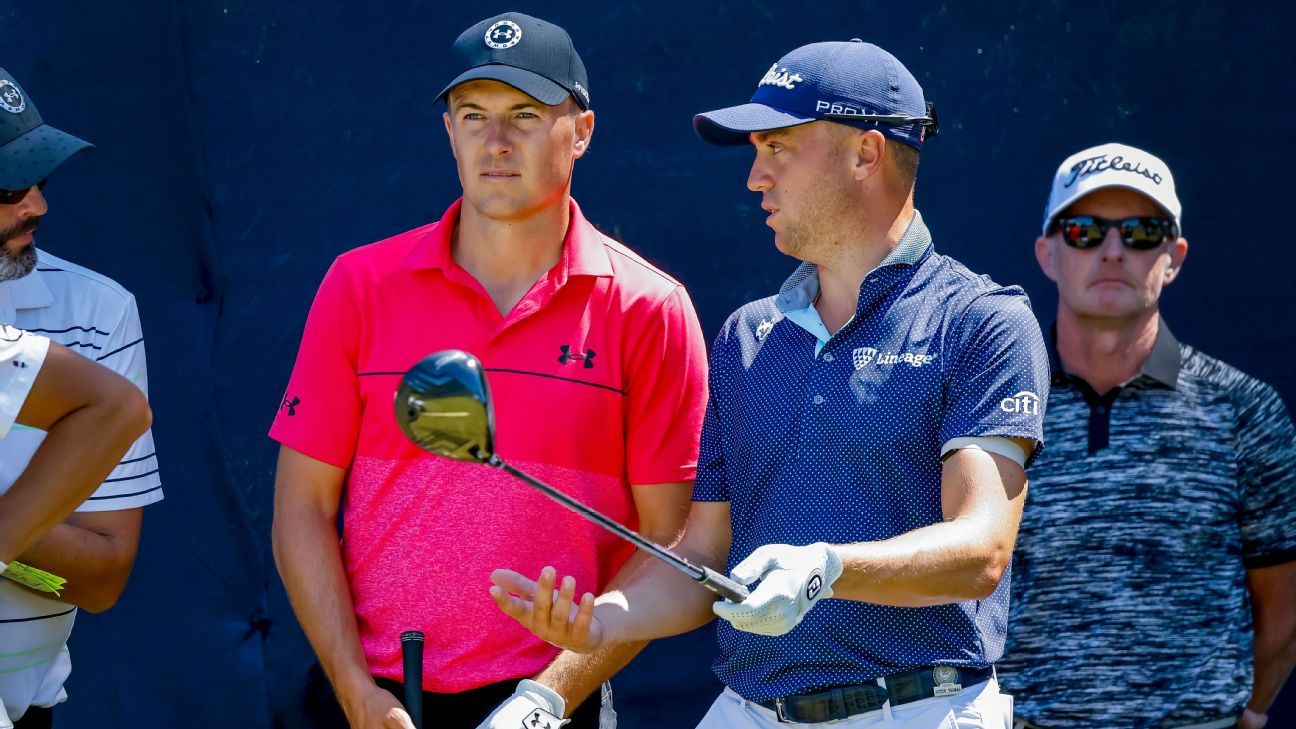 The rosters for the 14th Presidents Cup are set, and once again the Americans, who have won 11 previous times, seem to be overwhelming favorites.

With the U.S. team having five of the top 10 players in the world and 11 of the top 20, the International team faces an uphill climb when play begins at Quail Hollow Club in Charlotte, North Carolina, on Sept. 22.

“I don’t think anybody gets too caught up in being the favorites,” said Kevin Kisner, who was one of six captain’s choices by U.S. team captain Davis Love III on Wednesday. “The motivation is to win for your country, your team and focus on the task at hand.”

The Americans have won eight straight Presidents Cup matches, including a 16-14 victory in Melbourne, Australia, in 2019.

“[It] was a little closer than we wanted last time in Australia, but we proved that we can play and we can go on a long road game, and we have to take this home game, one, seriously, and two, get the momentum,” Love said. “But our guys understand that anybody can win any match in match play, and if they are not ready come Thursday at lunchtime, somebody is going to jump them.”

Here’s what to watch for two weeks ahead of the Presidents Cup:

There seems to be two certainties when Love fills out his lineup: Jordan Spieth is playing with Justin Thomas and Patrick Cantlay with Xander Schauffele. Spieth and Thomas have been a successful duo in the Ryder Cup. Cantlay and Schauffele played together four times at the last Presidents Cup in 2019. They also came out on top at the Zurich Classic of New Orleans in late April.

World No. 1 golfer Scottie Scheffler and Sam Burns are very good friends, so putting them together makes sense. They vacationed together with their wives in Greece after The Open in July. Kisner and Max Homa played together at the QBE Shootout in Naples, Florida, in December, tying for fifth. Kisner could also play with rookie Cameron Young, who doesn’t say much. Kisner talks a lot.

The mild-mannered Tony Finau can play with pretty much anybody — he played with Matt Kuchar and Bryson DeChambeau at the 2019 Presidents Cup and Harris English at the Ryder Cup. Maybe Finau might be a good fit with Billy Horschel, whose demeanor runs a little warmer. Collin Morikawa, a two-time major winner and Presidents Cup rookie, could also play with just about anyone.

What about the International team’s lineup?

International team captain Trevor Immelman had to scramble to build his 12-man team, after Australia’s Cameron Smith and Chile’s Joaquin Niemann defected to the LIV Golf circuit, making them ineligible for the Presidents Cup, which is sanctioned by the PGA Tour. South Africa’s Louis Oosthuizen and Abraham Ancer, who were also sure things to make the team, also are playing on the LIV Golf tour.

Nationalities would figure to be the common thread when Immelman rolls out his pairings, or maybe not. Canada’s Corey Conners and Taylor Pendrith, who were college roommates and play a lot of golf together, are probably one team. The same probably goes for Australia’s Adam Scott, who will be playing in his 10th Presidents Cup, and Cameron Davis, a rookie.

But Immelman said the International team has evolved to the point where he can pair players from different countries.

“Over the last three or four years, one of the hurdles that our team has finally started to overcome is we’re at a point now where we don’t have to match people of the same nationality to get the best out of them,” Immelman said. “We’ve got the squad atmosphere over the last four or five years. Players are extremely comfortable being with each other, hanging around each other. We have found ways to bridge the communication gaps in certain instances.

“Really I have every option available to me. I don’t have to try and match two Canadians together and Koreans together and such. Whilst it is an option, I would not hang your hat on it.”

Mito Pereira and Sebastian Munoz are good friends. Munoz was waiting in the parking lot for Pereira after his meltdown on the 72nd hole of the PGA Championship at Southern Hills. There are four South Koreans on the team — Si Woo Kim, Tom Kim, Sungjae Im and K.H. Lee.

Hideki Matsuyama, another veteran, could be a steadying force for Christiaan Bezuidenhout, a rookie. Immelman’s team is already facing long odds in winning, so he could retool his lineup if things go bad early.

Who was the biggest U.S. snub?

Love’s decision to pick Kisner was a safe pick. He’s ranked 26th in the world and is a veteran on the youngest U.S. team in Presidents Cup history. Kisner is also a match-play specialist, having won the WGC-Dell Technologies Match Play in 2019 and finishing runner-up twice. He’s one of the best putters on Tour.

“I always love representing my country and being part of a team sport,” Kisner told ESPN on Wednesday. “I can’t wait to go play with these young guys and see what they’ve got.”

When Will Zalatoris was forced to pull out of the Tour Championship and Presidents Cup because of a back injury, it opened a spot for Kisner.

“Kevin adds some veteran leadership, a guy in the team room that everybody loves having around [and] is really, really easy to pair,” Love said. “We have veterans on the team that know the guys that are easy to play with. We have statisticians, analytics who tell us who is easy to pair and who fits the golf course, and Kevin as a veteran certainly fits that role.”

Love might have instead gone with Tom Hoge or J.T. Poston, who were ranked just ahead of Kisner in the Presidents Cup standings, or PGA Tour rookie Sahith Theegala, who had 11 top-25s and advanced to the Tour Championship.

Hoge was probably the biggest snub. He picked up his first PGA Tour victory at the AT&T Pebble Beach Pro-Am in February and had six top-10s. But he had a rough stretch of six straight missed cuts this summer. He recovered to finish 10th at the Tour Championship. He was next in line behind Young, so it would have been easy to go with him.

“I always say our first 12 is good and our next 12 is really good, and that’s what makes my picks so difficult,” Love said. “Just start right on the list of automatic qualifiers. Obviously, it’s disappointing that Will got hurt. Our first 12 [were] incredibly strong. We almost could have just gone right off the top-12 list. But when you start at 13 and work your way down, every one of those guys is a great player and had a great year and has a case for playing.”

Who is going to be the emotional leader of Team USA?

Patrick Reed, who left the PGA Tour for LIV Golf, earned the moniker “Captain America” because of his strong play and emotion at the Ryder Cup and Presidents Cup.

Horschel, who first competed on the PGA Tour in 2010, will make his first appearance in an international team event at Quail Hollow. Besides Rory McIlroy, few players have been more vocal in their defense of the PGA Tour this season. And few players wear their emotions on their sleeves like Horschel.

Love said it would be important to find a partner that can handle Horschel’s energy.

How much of a distraction will LIV Golf be in Charlotte?

The PGA Tour-LIV Golf battle for the best players in the world has dominated the sport all year. The PGA Tour is hoping the defections have ended after the most recent wave of players left after the FedEx Cup Playoffs. Sources previously told ESPN that Pereira intends to join the LIV Golf circuit sometime in the future.

There’s no question LIV Golf took a handful of the International team’s most experienced and talented players, hindering their chances at Quail Hollow.

“I feel bad for the game of golf right now that this is the story going in, and we’ve got how many ever days until we actually tee off,” Love said. “They are playing a great event this week [on the DP World Tour] and the story is, you know, Billy Horschel and Jon Rahm wishing guys weren’t there. That’s sad. I feel bad for all of us, really.

“But Trevor has a job to do, and that’s to take 12 guys in there ready to play, and he’s focused on that. We’ve talked about it a lot. I have to get these 12 guys that are dying to play for Team USA ready to play, and it will be a great show once Thursday starts.[Former PGA Tour] commissioner Tim Finchem always used the word, it’s a distraction. This is a big, big distraction away from what we really should be talking about.”

Chancellor to promise ‘new era for Britain’ with plan for growth in mini-budget
Shakur Stevenson ready for the best lightweights; who’s in line to fight for the vacant 130-pound titles?
Native American accepts apology from Oscars after abuse in 1973
‘Reasonable grounds’ to believe war crimes committed in Ukraine, says international court
Truss admits her tax cuts will disproportionately benefit the rich – and says she’s prepared to be an unpopular PM to boost economy