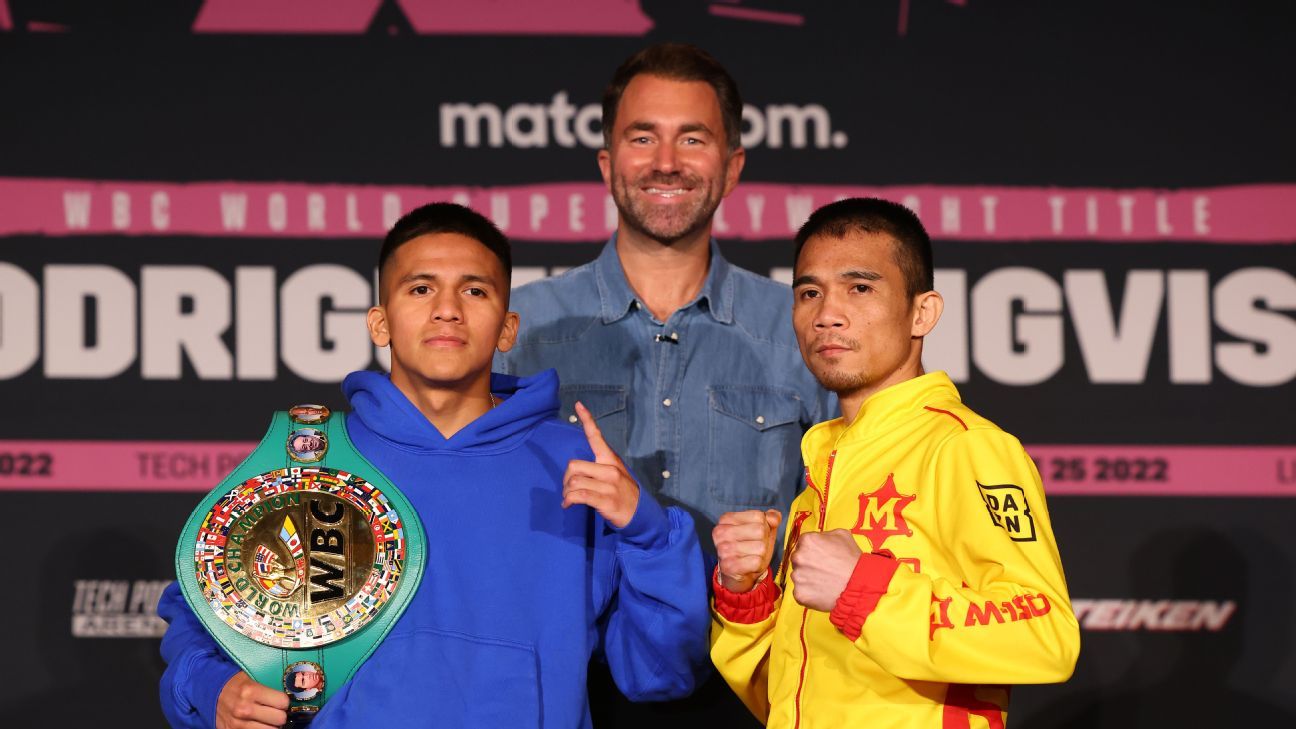 The title fight (Juan Francisco Estrada is the WBC franchise champion) marks Rodriguez’s first defense after he surprised the boxing world in February with a career-making victory over Carlos Cuadras. Now, the 22-year-old will look for an even bigger statement with a bout against one of the toughest boxers in the sport.

The main event figures to present plenty of fireworks in a division that consistently delivers action fights. But there are two other title fights on the undercard. A third scheduled title fight pitting flyweight champion Julio Cesar Martinez vs. McWilliams Arroyo was scrapped after Martinez withdrew on Thursday with an illness.

Here’s a look at all three fights on Saturday’s title tripleheader in order of importance and entertainment value:

Rodriguez (15-0, 10 KOs) dazzled in February with a comprehensive decision victory over Cuadras, a former champion. Perhaps most impressive of all, Rodriguez accepted that assignment on just six days’ notice after Rungvisai withdrew with an illness.

The brother of WBA “regular” 115-pound titleholder Joshua Franco, Rodriguez didn’t just box his way to victory. He floored Cuadras with an uppercut in Round 3 and showed off sound technique under the guidance of trainer Robert Garcia.

On Saturday, the budding star has a far more formidable challenge in front of him in the form of Rungvisai. The hard-nosed Thai fighter rose to prominence with a controversial upset decision over Roman “Chocolatito” Gonzalez in March 2017. Rungvisai (50-5-1, 43 KOs) left no doubt in the rematch six months later with a brutal fourth-round KO of the future Hall of Famer.

If there were any questions about Rungvisai’s level after the pair of wins, those were answered when he scored a majority decision victory over Estrada in February 2018 to retain his 115-pound championship. Estrada narrowly defeated Rungvisai in an April 2019 rematch, and since then, Rungvisai hasn’t faced a top-level opponent.

Now 35, Rungvisai will look to reestablish himself as one of the sport’s elite fighters with Saturday’s matchup. It’s a fascinating clash of styles, too, that figures to present a potential fight of the year candidate. Rungvisai applies relentless pressure and rarely takes a step backward while he unloads haymakers. Rodriguez, too, is happy to exchange on the inside, but he possesses the superior craft — along with a 13-year age advantage.

“A lot of people have eyes on me now and they are looking at me to take over the division,” Rodriguez said. “I’ve seen a lot on social media saying I am the new [Chocolatito], and that’s a lot of motivation and I want to live up to the hype.

“Rungvisai has been in with the best and beating him would really boost my confidence and skyrocket my career. I feel a lot stronger than I did against Cuadras. That wasn’t a fluke; I want to show I am the real deal.”

The winner of the bout will be lined up for an even bigger fight in a stacked division that includes Gonzalez, Estrada, Franco and Kazuto Ioka. Rungvisai is ranked No. 3 by ESPN, while Rodriguez is two spots behind him at No. 5.

Akhmadaliev, like Stephen Fulton, holds two junior featherweight titles, and a win against Rios could lead to a battle between the two later this year for the undisputed championship.

Akhmadaliev (10-0, 7 KOs) and Rios were set to square off in November before Rios tested positive for COVID-19. Finally, on Saturday, Rios will get his second crack at a world title. When he first challenged for a major belt, he lost a unanimous decision to Rey Vargas in 2017. Two fights later, Rios (33-3, 16 KOs) was knocked out in Round 6 by Azat Hovhannisyan.

The 32-year-old from Southern California has reeled off four wins since that latest setback on his way to a No. 9 ranking by ESPN, but he now is faced with his toughest challenge yet.

Akhmadaliev, who captured an Olympic bronze medal for Uzbekistan in 2016, scored a career-best victory in January 2020 when he defeated Daniel Roman via split decision to claim the two titles. That was just his eighth pro fight, and since then, he has made two successful defenses. Most notably, he scored a fifth-round TKO of Ryosuke Iwasa in April 2021 to retain the IBF and WBA belts.

ESPN’s No. 2 junior bantamweight, Akhamdaliev hasn’t cracked the pound-for-pound list yet, but he’s not too far away from that kind of recognition.

McCaskill, ESPN’s No. 4 pound-for-pound woman boxer, announced her arrival when she upset Cecilia Braekhus in August 2020 to win all four major welterweight belts.

The 37-year-old from Chicago followed up with another decision victory over Braekhus in the rematch and made a second defense with a seventh-round TKO of Kandi Wyatt in December.

Now, McCaskill (11-2, 4 KOs) is set for her first fight of 2022. Ibarra, who is ESPN’s No. 5 boxer at 147 pounds, should present a much tougher challenge than Wyatt. The 34-year-old Mexican fighter owns a win over Wyatt from last year. Her only defeat came against Raquel Miller at 154 pounds. Miller now competes at middleweight, while Ibarra (10-1, 5 KOs) returns to welterweight.