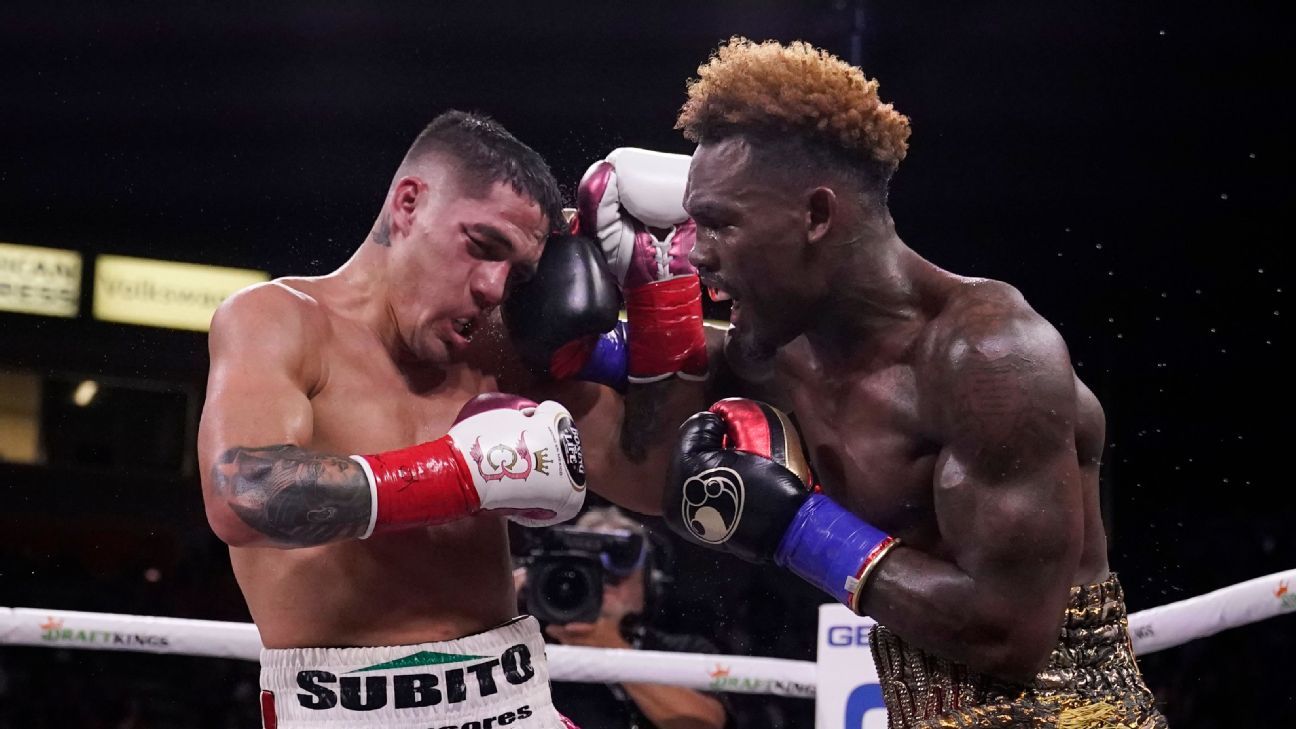 CARSON, Calif. — After 22 rounds, Jermell Charlo appears to be finished with his rivalry with Brian Castano. Charlo made the proper adjustments after their first encounter and outboxed Castano down the stretch en route to the brutal 10th-round finish following two knockdowns on Saturday.

The 31-year-old from Houston can now cherish the biggest win of his career, the one that at long last made him undisputed at 154 pounds six years after he won his first title with an eighth-round KO of John Jackson.

His résumé grew throughout the process. A first-round KO of Erickson Lubin. The 11th-round KO of Tony Harrison in a rematch. And also an eighth-round KO of Jeison Rosario in 2020 which secured his third belt. But the Castano bouts were the toughest of them all, even considering his controversial decision loss to Harrison in 2018.

Now, more young, hungry challengers await, with two standing out above the pack: Tim Tszyu and Sebastian Fundora. They were both ringside at Dignity Health Sports Park to get a closer look at the new ruler of the junior middleweight division, and they both want their title shot now.

Tszyu, the son of Hall of Famer Kostya Tszyu, appears to be first up after he agreed to step aside to allow Charlo and Castano to proceed with Saturday’s rematch. The 27-year-old Australian is coming off the best win of his career, a unanimous-decision victory over Olympian Terrell Gausha in March — a bout where he was dropped in the first round. But is the rapidly developing boxer ready for one of the best fighters in the sport?

The disparity in their career earnings aside, Tszyu sits as the WBO’s mandatory challenger and is rated No. 3 by ESPN at junior middleweight. He’s also one of the biggest sports stars in Australia, which is set to host 50,000-plus fans for the undisputed lightweight championship fight between George Kambosos and Devin Haney on June 5.

Still, Tszyu (21-0, 15 KOs) told ESPN hours before Charlo and Castano entered the ring that he wanted his fight with the winner in the U.S.

“Two years already I’ve been mandatory for the WBO title, so I think it’s about time,” he said. “I prefer the Charlo fight [in comparison to a Castano fight]. Stylistically I think it makes more sense for myself.

“Just a better fight, bigger buzz; that’s what boxing’s all about. I wanna bring a big, big fight [to Australia] after I win something big.”

Just hours after falling to Charlo, Castano was wary of Tszyu’s chances.

“He’s a great fighter, but he’s probably not ready for Charlo,” Castano said. “He should face another opponent before that, even though he looked great against Terrell Gausha.”

Fundora (19-0-1, 13 KOs) is also coming off the biggest win of his career. Known as “The Towering Inferno” for his six feet, five-and-a-half inches and dizzying volume of punches, Fundora brutalized Lubin last month in a slugfest.

And like Tszyu, he was forced to rise off the canvas from his first-career knockdown to notch the victory, a ninth-round TKO that guaranteed him a shot at Charlo’s WBC title.

“I take myself as a power-puncher as well, and he’s also a power-puncher so it’s fireworks,” Fundora, who lives in Southern California, told ESPN. “These big fights have to happen for me to grow and finish my prime, but right now, I think we’re at the start of [my prime]…. I’ve always been taller than everybody else so those uppercuts are right next to my face.”

Whatever — and whomever — lies ahead for Charlo, he’s earned a long rest and all the accolades that accompany such a thrilling victory. He also has the boxing skills and the power to be one of the best in the world.

And now, he’s proven his mettle, too, against one of the most relentless pressure-fighters in the world. But four titles mean four sanctioning-body obligations to fulfill, and lots of men aiming for his spot.

“I showed these haters I can stand there and trade,” Charlo said. “This is legacy. This is something that is legendary. I’m a legend.”