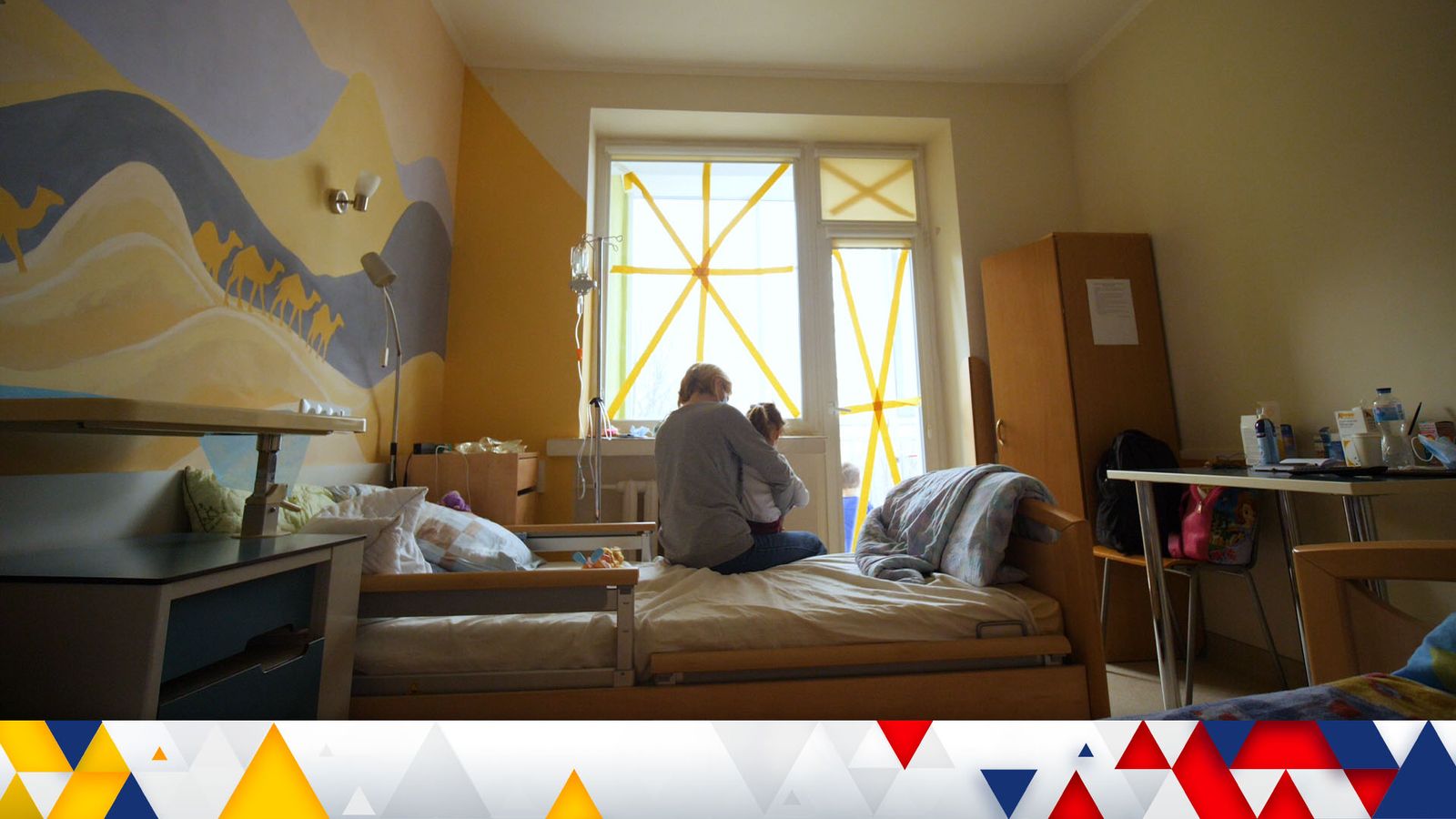 We’re visiting the cancer ward of a Ukrainian children’s hospital, where doctors know this and are planning an evacuation operation that is as delicate as it is tough.

They hope to organise a medical convoy that will take some of the hospital’s sickest children over the border in Poland.

It will make the children, and their families, refugees – but it could save their lives.

Although this hospital is in Lviv in western Ukraine, miles from bitter fighting further east, it is still not safe.

Staff have taped up windows to stop them shattering in case of shelling but they know it’s not enough.

One goes off during our filming.

“You’ll see now how all the patients have to come out of their rooms,” says Yuliya Nogovitsyna, from the children’s charity Tabletochki Charity Foundation. “You can go with them but you’d better take your coats.”

For the third time today, tired and sick families scramble down to the underground shelter where it’s cold, damp and utterly surreal.

This hospital was built during the Soviet-era to treat high-ranking officials and their families.

In the basement, there is a disused spa.

We see families sitting on the benches of sauna rooms and perched on camp beds arranged in the big, now empty, swimming pool.

Oksana Babych arrived at the hospital yesterday with her daughter.

They hold tightly on to each other in the underground gloom, waiting anxiously for the all-clear.

“Out of all the safe places, this one is the safest,” Oksana tells us. “Although I don’t think anyone in Ukraine feels safe now, nowhere.”

Oksana’s daughter Elina, seven, was diagnosed with a malignant brain tumour at the end of last year.

Mother and daughter initially left their home in eastern Ukraine and travelled to the capital Kyiv for treatment but when war broke out they were evacuated further west.

“There was surgery, and then radiotherapy,” Oksana explains. “She’s due her next tests soon.”

“They have said we will be evacuated from here, to Poland first, but I don’t know where we will go from there,” she adds

In fact none of the families know yet, for certain, where they will end up.

Doctors are trying to link them with suitable hospitals which could be anywhere in the world.

Oksana turns to her daughter and says: “We are going where they take us, right?”

The next day, we’re back at the hospital: it’s convoy day.

Several families are already packed and waiting in the corridors.

The sickest children will go by ambulance, the more stable by coach.

But as the children’s conditions can deteriorate rapidly, the whole convoy will be flanked by police cars and diplomatic escorts so that it can move fast.

“We are responsible for these kids,” emergency doctor Pawel Kukiz-Szczuciński tells us. “Everything can change, even up until the very last minute.

“Remember, this is a war zone and we are near an area where a missile strike killed a lot of people. So we have to mindful of that.

“And of course, there is pressure with that.”

Among the families gathering in the filling corridor, we don’t see the mother we met yesterday, sheltering with her daughter in the basement.

We find Oksana and Elina in their room, trying to summon the courage to leave.

Oksana’s hands are shaking and she is holding back tears.

“I am afraid of the uncertainty,” she says. “I’m just afraid.”

It’s all she can manage before she turns away to get her daughter ready for what lies ahead.

Back in the corridor, families start to head down to the convoy vehicles.

Mothers, female relatives and siblings will travel too but fathers have to stay.

It means that Mykhalo Vivcharenko is about to say goodbye to his wife Ivanka, son Marko, four, and his six-month baby daughter.

Marko, who recently underwent surgery for a brain tumour, is all smiles as he waves a little plastic toy bus in the air.

“He’s okay as long as daddy is here,” mum Ivanka says, glancing nervously at him. “But we don’t know how he will be later.”

We soon find out.

As his father leaves him, whispering sweet words and a tearful goodbye, Marko bursts into sobs.

Mykhalo hugs his wife and baby daughter for one last time before somehow finding the strength to leave them on the coach.

As the coach pulls off, Mykhalo stands on the pavement, waving.

At the very last moment, he gestures in the air making the sign of the cross.

This war is tearing families apart, stripping them of control and certainty.

But love and the need to protect, remain.

It’s that which propels families forward into the unknown, giving them the strength to face the unimaginable.