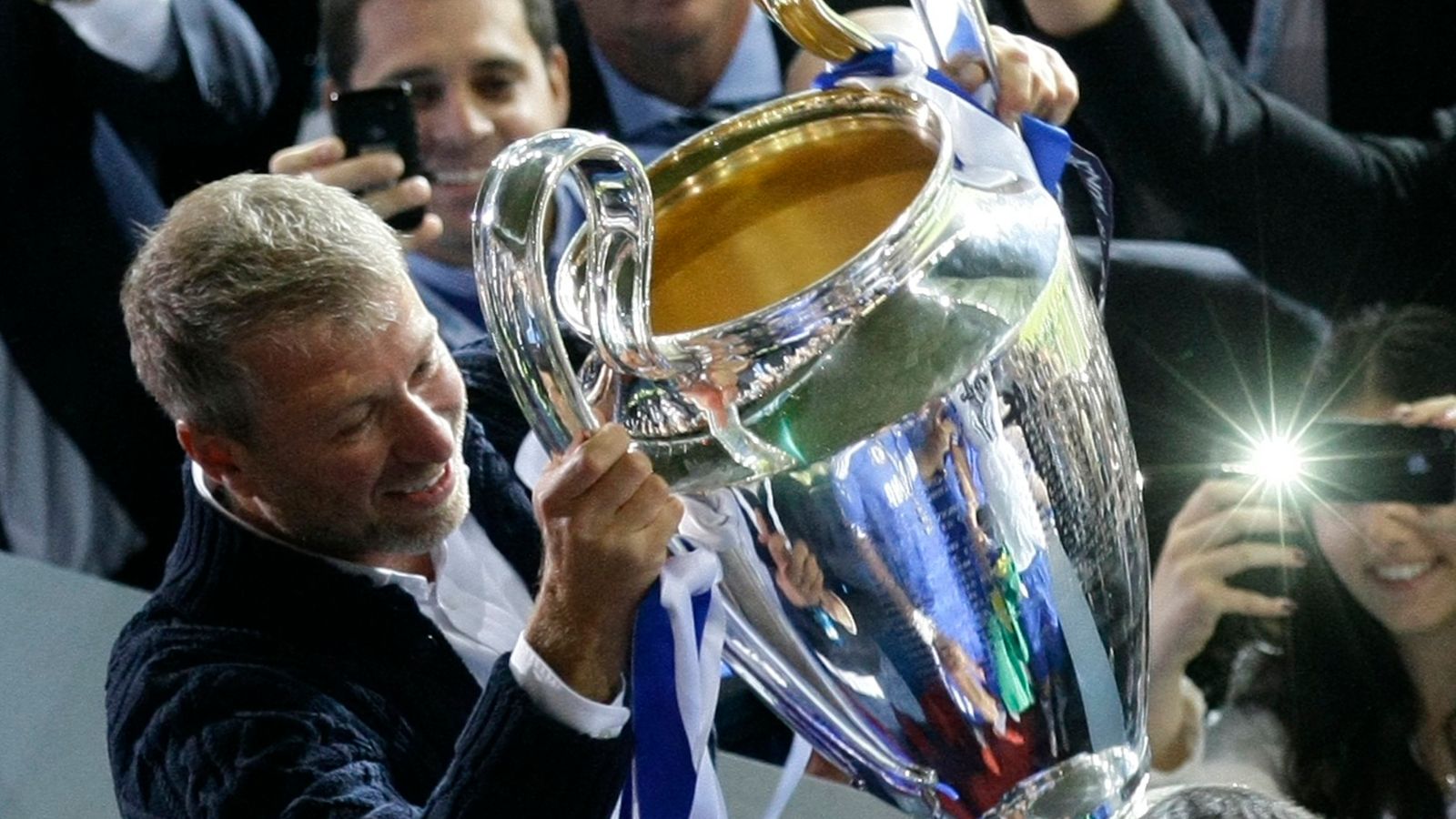 The final three suitors for Chelsea Football Club have been handed an eleventh-hour demand to stump up £500m more to buy last season’s Champions League-winners – just days before the potential anointment of a preferred bidder.

Sky News has learnt that the trio of billionaire-studded consortia were informed in the last 48 hours that Roman Abramovich, the Blues’ owner, was demanding that the additional sum be guaranteed by his successors to augment what would be one of the biggest charitable donations in British history.

A source close to the process said on Thursday that their consortium had been informed of the request earlier this week and was minded to agree to it.

They said they understood the demand for the additional sum had come directly from Mr Abramovich’s associates.

One insider said they understood the owner was insisting that £1bn would be handed to charitable causes straight after the sale completed – effectively guaranteeing a minimum headline price for the club of £2.5bn.

The government’s sanctioning of Mr Abramovich meant it was now not legally possible to repay a £1.54bn loan owed by the club’s parent company, Fordstam, to Camberley International Investments – a vehicle also associated with the oligarch – and that an inadvertent effect of Mr Abramovich’s sanctioning meant he would not have access to the funding required to repay the loan, the person said.

The loan is thought to be repayable on Chelsea’s sale.

Prior to being placed on the sanctions list in March, Mr Abramovich said he intended to write off the loan and hand the net proceeds from the sale to a new foundation set up to benefit the victims of the war in Ukraine.

Chelsea and its advisers at the merchant bank Raine Group are awaiting clarity over the fate of that loan, but a source close to one of the bidders said they had been told that it was “impractical” for the loan to be forgiven as originally envisaged.

The government has said publicly that Mr Abramovich must not receive any of the funds paid by a new owner following Russia’s invasion of Ukraine.

Mr Abramovich’s associates are said to have been consulting with large blue-chip international charities and UN associates about the establishment of a new independent foundation..

It was unclear whether the special licence that ministers will need to issue to permit the takeover of the Stamford Bridge club will enable the immediate distribution of the sale proceeds to charity.

The Department for Digital, Culture, Media and Sport is understood to be aware of the consultation process relating to a new foundation.

One investor who is participating in the auction process said they had been informed that Mr Abramovich’s desire was to see a total of £2.5bn donated to charity, with a further £1bn-£1.5bn going to Chelsea in the form of investment in its stadium, academy, and women’s team.

That would ensure a total financial commitment from Chelsea’s next owners of between £3.5bn and £4bn.

In exchange for the last-minute demand for the extra £500m, Raine is said to have informed bidders that some of the financing constraints such as those relating to their use of debt would be relaxed.

One source said that all three bidders remained in the auction process and were minded to agree to Mr Abramovich’s request.

Nevertheless, it was unclear whether any would have difficulty securing the additional financing at such short notice.

Bidders are also said to be seeking assurances about the destination of the additional funding given the implications of acquiring Chelsea from a sanctioned individual.

Already this week, manager Thomas Tuchel has said that the sanctions against the club’s owner were to blame for Antonio Rudiger, the German central defender, deciding to leave in the summer.

The three remaining bidders, who have all held further meetings with club executives and Raine at Stamford Bridge this week, have been asked for a guarantee that they will not sell a controlling stake for at least a decade.

That request, which is thought to be unprecedented in a football club auction, was allied with one for minimum further investment of £1bn in its stadium, academy and women’s team.

The demands highlight the unusual nature of the Chelsea sale process at a time when the ownership of English football clubs faces unprecedented scrutiny and government intervention.

On Monday, ministers published their response to former sports minister Tracey Crouch’s report on football governance, paving the way for the establishment of a new independent regulator for the sport.

In addition to the price it is able to secure, Raine has told bidders throughout the eight-week process that it is focused on securing the best future steward of last season’s Champions League-winners.

Mr Abramovich has owned Chelsea since 2003, and has turned the club into one of the top sides in Europe, with 19 major trophies having been won under him.

Of the three bidders, the consortium headed by Boston Celtics part-owner Steve Pagliuca and Larry Tanenbaum, the NBA chairman and Toronto Maple Leafs owner, has publicly committed to “lifetime ownership” of Chelsea.

Between them, the two men would have outright control of the club, with Mr Tanenbaum telling Sky News last week: “My goal, and that of Steve, would be to own Chelsea for decades to come.”

The bid fronted by Sir Martin Broughton, the former British Airways and Liverpool FC chairman, would involve Harris Blitzer Sports & Entertainment – owner of a stake in Premier League side Crystal Palace and a string of US sports teams – holding a controlling interest.

The other shortlisted bid would be 66%-owned by Clearlake Capital, a California-based investment firm, but would split voting rights equally with a group of investors led by Todd Boehly, the LA Dodgers part-owner.

Mr Boehly’s bid is being advised by Goldman Sachs and Robey Warshaw, where the former chancellor – and Chelsea fan – George Osborne, now works as a partner.

The last eight weeks have witnessed a bidding frenzy unprecedented in English football, with billionaire financiers, media tycoons, and sports team owners from several continents joining forces in an attempt to gain control of the Blues.

The auction of Chelsea has become arguably the most politically charged sports deal in British history, eclipsing even last year’s controversial takeover of Newcastle United by a Saudi sovereign wealth fund-led consortium.

The True Blues Consortium of Chelsea supporters, which counts former Blues captain John Terry among its founders, has thrown its weight behind the Pagliuca-Tanenbaum bid.

More than 10,000 Chelsea fans have expressed an interest in owning shares as part of the deal that will see Abramovich replaced as the club’s owner.

All three of the bidders are expected to be approved under the Premier League’s Owners and Directors’ Test before a recommendation is made.

An announcement about a preferred bidder had been expected in the coming days, although it was unclear whether the latest demand from Mr Abramovich would have any impact on the timetable.

Chelsea’s current operating licence expires at the end of next month.

An imminent sale is seen as essential if Chelsea is to avert the uncertainty that would trigger the break-up of one of the top flight’s most valuable playing squads.

None of the parties contacted by Sky News on Thursday would comment.