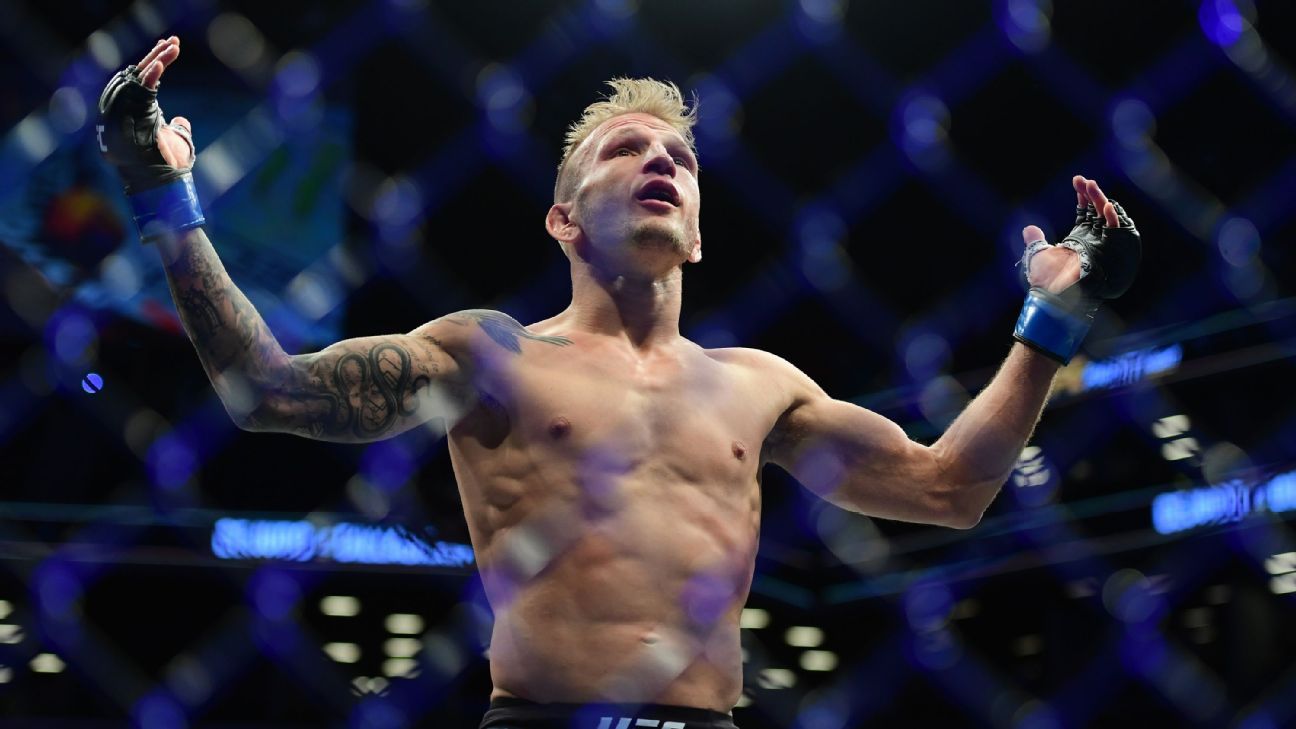 TJ Dillashaw intends to reclaim the UFC’s bantamweight championship in 2022 — and he does not think it will be tough to do so.

In Jacksonville, Dillashaw (17-4) watched Aljamain Sterling defend the 135-pound title against Petr Yan at UFC 273 earlier this month. Speaking to ESPN on Monday, the former bantamweight king said he was surprised Sterling (20-3) prevailed in that fight.

“This is probably where I’ll do my training camp,” said Dillashaw, who is currently on vacation in Hawaii. “I’m not too worried about Sterling. That’s a pretty easy fight, to be honest. I’ll just do my training camp here on the beach with a drink in hand and get the job done.

“He’s good, don’t get me wrong. He’s got attributes. He wouldn’t be where he’s at without being good, but he’s definitely not champion caliber. The guys I’ve fought in the past were much better than he is, a lot more dangerous. There’s no danger in fighting Sterling. Has he ever knocked someone out? I don’t even know. He’s a guy you don’t have to be worried about.”

Sterling has just one TKO victory in 16 appearances in the UFC. He is well-known for his grappling, which has led him to four submission finishes.

Dillashaw, of Southern California, is a two-time former UFC bantamweight champion. He first won the belt in 2014 by knocking out Renan Barao. He lost the title in a close fight to Dominick Cruz in 2016, but recaptured it by knocking out Cody Garbrandt in 2017. He relinquished the belt in 2019, after testing positive for Erythropoietin (EPO). He served a two-year suspension as a result of that failed drug test.

Since his reinstatement, Dillashaw is 1-0 with a five-round victory over Cory Sandhagen. The UFC has not officially said Dillashaw is next in line for Sterling. However, Sterling did call him out in Jacksonville and UFC president Dana White later stated Dillashaw was “probably” next up.

Sterling has already made it no secret he intends to attack Dillashaw’s character for his use of performance-enhancing drugs. Dillashaw, 36, said he’s already made peace with that.

“I’m totally prepared for it,” Dillashaw said. “We’re all gonna see, that’s the only thing he’s got. The guy took a page out of [former champion, Henry Cejudo‘s] book and became even cringier. All of his trash talk, whatever he’s gonna say, it’s just embarrassing. His talk is the same as his striking, it’s embarrassing to be in the UFC with what he has to offer.”

Should Dillashaw reclaim the belt as easy as he believes, he said he’s looking forward to future title defenses against Cejudo [who recently announced he is coming out of retirement] and former featherweight champion Jose Aldo.

Adele ‘thrilled’ as she performs her first UK gig in five years
‘Stop Brexit Man’ anti-Tory protester could be prosecuted, police say
World leaders condemn shopping centre attack in Ukraine, calling it a ‘war crime’
Starz could turn into an ‘acquisition machine’ after Lionsgate spins it off
Tory whip resigns over groping allegation after ‘drinking far too much’ on night out