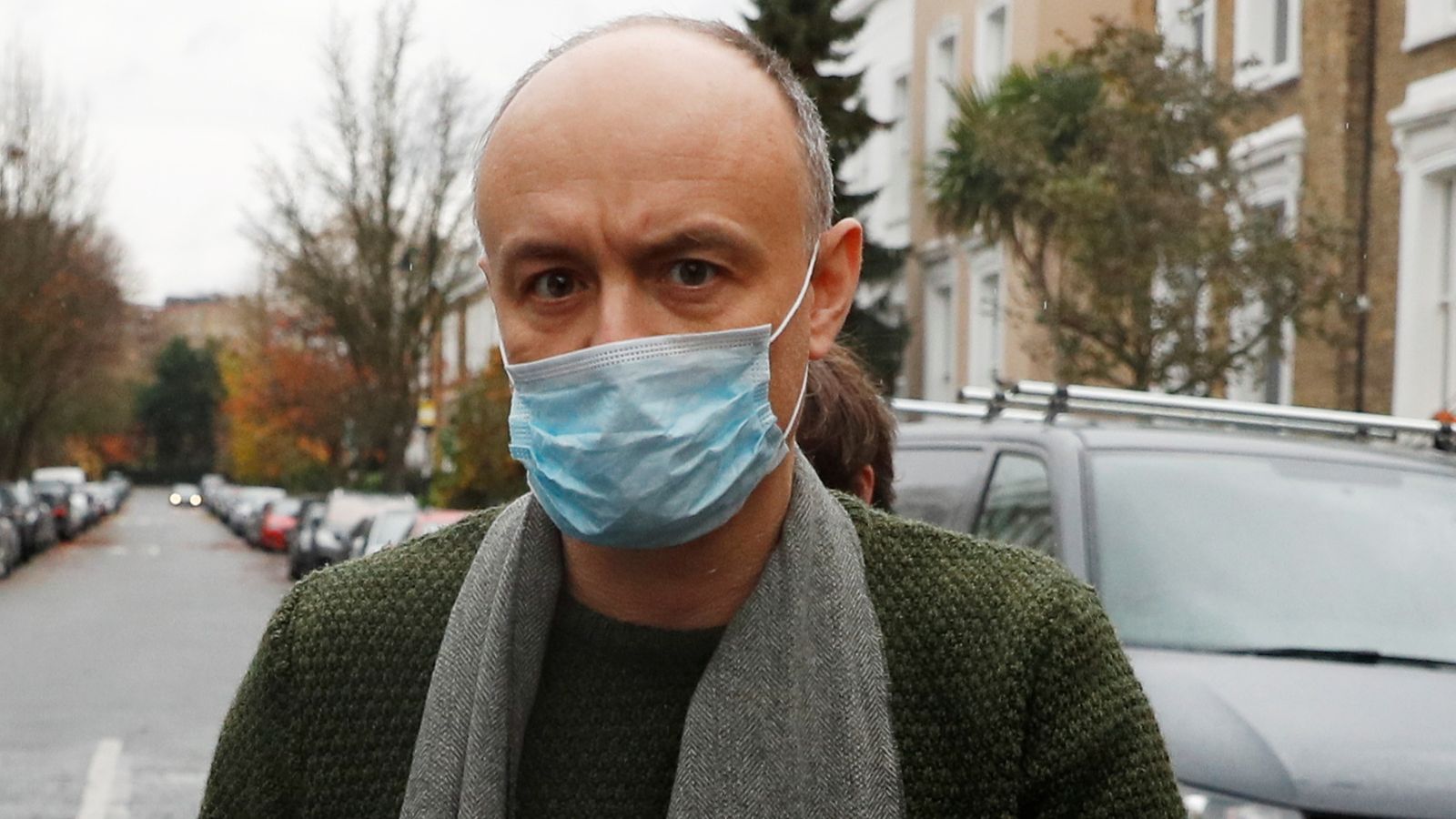 The lead story on page one of The Times appears under a headline: “Cummings is accused of leaking PM’s texts. Johnson ‘saddened by bitter former adviser’.”

And the Sun’s page-one headline, alongside photos of Mr Cummings and the prime minister, is: “PM accuses ex-adviser of leaks. Boris: Dom’s a text maniac.”

In leaked texts to Sir James, Mr Johnson promised he would “fix” a tax issue for Dyson staff working to develop ventilators at the height of the coronavirus crisis last year.

Sky News attempted to contact senior Number 10 officials and Mr Cummings, who left Downing Street last November after a bitter power struggle, but neither would respond to our inquiries.

After the reports were published, The Guardian claimed: “In what appeared to be a coordinated attack on Cummings, the Telegraph, Times and Sun reported the same criticisms from an unnamed insider accusing him of being ‘bitter’ about leaving government.”

Opposition MPs will claim Number 10 is attempting to divert attention from allegations of “sleaze” and “cronyism” against Mr Johnson and senior members of his government – and former prime minister David Cameron over his lobbying for Greensill Capital.

The strongest attack on Mr Cummings came in The Times, with a “a No 10 source” quoted as saying: “Dominic is engaged in systematic leaking. We are disappointed about that. We are concerned about messages from private WhatsApp groups which had very limited circulation.

“The prime minister is saddened about what Dom is doing. It’s undermining the government and the party. It might be that Dominic feels bitter about what’s happened since he left – but it’s a great shame. Dyson was trying to do something for the good of the country.”

The Daily Telegraph claimed: “Mr Cummings has been fingered as the likely culprit in the leaking of messages between Mr Johnson and the Saudi Crown Prince Mohammed bin Salman and separate texts between the Prime Minister and the businessman Sir James Dyson.

“The former adviser is understood to have had legitimate access to the text messages during his time working in government.”

The paper quoted an unnamed source as saying: “If you join the dots it looks like it’s coming from Dom. More than anything, the PM is disappointed and saddened by what Dom has been up to.

“Dom may feel bitter about what’s happened since he left. Rather than falling apart, the government has been making great progress.”

According to the Telegraph, a “No 10 source” said of Mr Johnson and Mr Cummings: “They worked together closely, but if it’s true then it looks like he is doing everything he can to undermine the government, and people like Sir James Dyson, who was heavily involved in Brexit, have been caught in the crossfire.”

The Sun quoted “a No. 10 source” saying: “The prime minister thinks Dominic Cummings is responsible for a series of damaging leaks about his personal communications.

“He is deeply disappointed and saddened by what he thinks his former adviser has been doing and believes he is attempting to undermine the government and the Conservative Party.

“He fears Dom was responsible for the text message leaks about James Dyson and Mohammed bin Salman.”

The Sun also says a “top insider” added: “There is a worry that he is bitter about how the government has moved onwards and upwards since his departure.”

Wealthy customers will help Apple resist the effects of inflation
Britney Spears’ father denies bugging star’s bedroom during conservatorship
‘Biggest tax cut in a decade’ takes effect, but for many it will not ease cost of living crisis
Tesla (TSLA) announces just over 250,000 deliveries – first down quarter in a long time
Pincher and Johnson are united but powerless in wanting to avoid another by-election